The event came just two days after Biden made campaign stops in both Pembroke Pines and Miramar, his second visit to South Florida in just over a week. 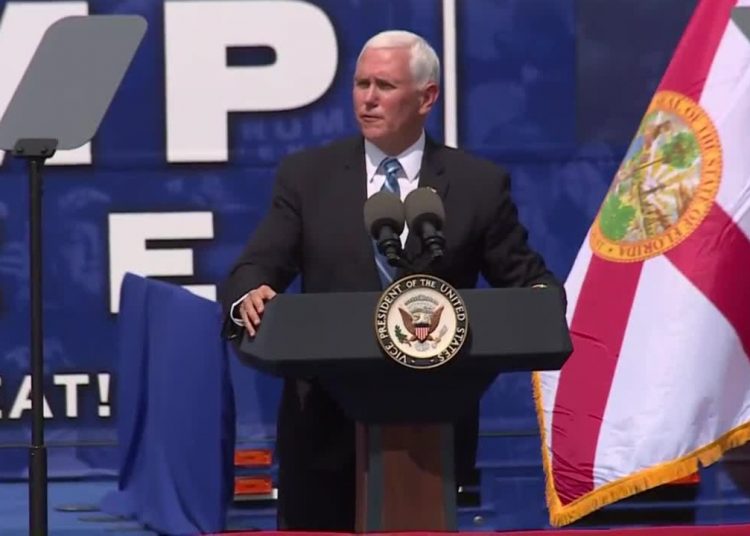 U.S. Vice President Mike Pence asked this Thursday in Miami for another four years of Donald Trump’s government to maintain his commitment to the “freedom of the hemisphere” and sanctions against socialist governments.

At a rally of some two hundred people at the Cuban Memorial in Tamiami Park, in southwest Miami-Dade County, Pence recalled Trump’s promise not to remove the sanctions imposed on Cuba until freedom is restored and political prisoners are released.

Pence landed in Miami early in the afternoon.

“Honestly, I’m here for a reason and one reason only,” he said. “And it’s that Florida and the United States need four more years of President Donald Trump in the White House. Four more years.”

“The road to victory runs right through Florida!” he told his followers.

During his 45-minute speech, he accused Democratic presidential candidate Joe Biden of wanting to raise taxes and filling the U.S. Supreme Court with liberal judges.

“Our vision that leads America to freedom, prosperity, and opportunity for all, and his (Biden’s) vision that sends America down a path of fewer opportunities,” Pence said.

The event came just two days after Biden made campaign stops in both Pembroke Pines and Miramar, his second visit to South Florida in just over a week.