A plane with 225 passengers, from Venezuela, and another with 163 travelers, from France, landed with little time difference in the Havana terminal. 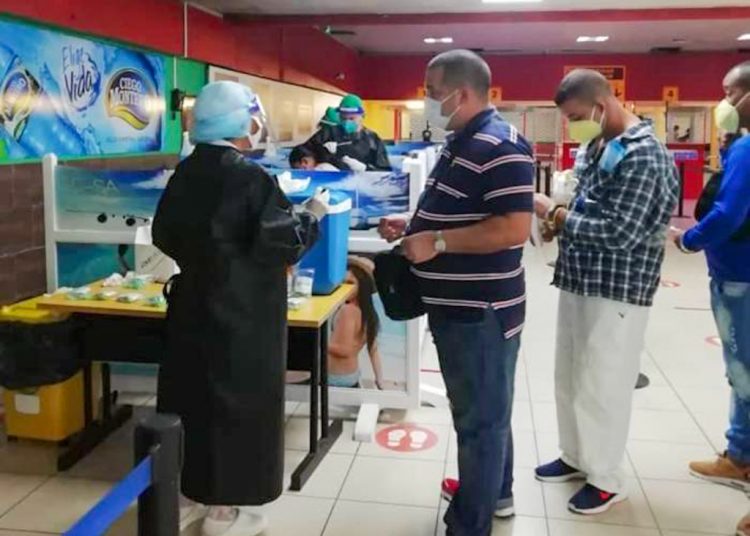 PCR is applied at the José Martí airport to travelers arriving in Cuba. The operation took between 30 and 35 seconds on average for each person. Photo: Luis Carlos Gongora/Facebook.

The José Martí airport in Havana received two flights this Thursday, which made it possible to test the new health protocols to deal with COVID-19 approved for the upcoming reopening of that international air terminal.

A plane with 225 passengers, from Venezuela, and another with 163 travelers, from France, landed with little time difference in the Havana terminal, reported the local newspaper Tribuna de La Habana.

The coordinator of programs for economic collaboration and international relations of the capital’s government, Luis Carlos Góngora, affirmed that six points were deployed for taking PCR samples from passengers on both flights, which coincided in the arrival area.

Góngora recognized the normal setbacks of that operation that took between 30 and 35 seconds on average for each person.

The protocol approved in Cuba for the new normal includes the application of PCR tests for each person who arrives on the island, and the isolation at home of travelers pending the results of that test, which detects the presence of the coronavirus.

Until now, passengers from abroad were transferred to isolation centers, where they had to wait a period of 14 days, to prevent them from infecting other people with COVID-19.

The new system ensures the transfer of personal data and private address of travelers to the health authorities of all the provinces and municipalities of the island, so that the primary health care system carries out its epidemiological surveillance and can notify them within 48 hours later the result of their test, Góngora said.