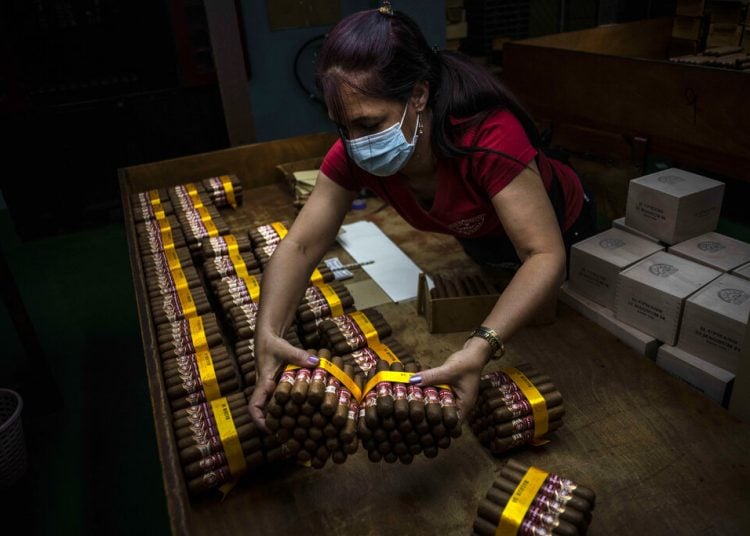 Neither the pandemic, nor the untimely downpours, nor the cancellation of a festival that annually brings together hundreds of Havana cigar aficionados was able to break the chain that begins in the Cuban fields and passes through the hands of the cigar makers so that the most famous cigars get to smokers.

“In these times of pandemic we are one of the sectors that sustain the economy of our country, an important product that contributes income,” Bárbara María Hernández, director of the Partagás Factory, one of the most traditional in the manual cigar rolling of the famous Cuban cigars, said this week in an interview with The Associated Press.

In 2020 and despite COVID-19, Partagás produced 4.5 million cigars and expects to increase that number to 4.7 million in 2021, Hernández said.

The factory with 500 workers—of which almost two hundred are cigar makers—did not stop its activities during the pandemic and joined the other 34 state workshops that throughout the country contribute each year to manufacture 100 million units that Cuba exports to 150 countries through the Habanos S.A. joint venture, a partnership created in 1994 between Cubatabaco and Altadis, a Spanish company owned by the English Imperial Tobacco Group PLC.

Habanos S.A. is usually the host of an international festival that for two decades has attracted hundreds of cigar aficionados, sometimes wealthy ones who pay thousands of dollars for exclusive boxes of cigars, and invites celebrities such as Jack Nicholson—a lover of Partagás—, James Belushi, Jeremy Irons and Joseph Fiennes or models like Naomi Campbell and Paris Hilton.

But this year the firm announced in a statement that the event will be suspended due to the pandemic and the aficionados won’t get to try here their Cohíba, Montecristo, Romeo y Julieta or H. Upmann, considered among the best cigars in the world.

The International Havana Cigar Festival also used to be the time when the company announced the annual balance of its business, which has increased steadily in recent years despite the fact that it had to deal with the effect of anti-smoking laws in strategic markets, fiscal pressures in some nations and economic crises.

A request for an interview with Habanos S.A. by the AP to know of its performance during the pandemic was rejected.

The latest available figures are from 2019. The joint venture—with the monopoly of sales for the entire planet—reported revenues of just over 530 million dollars per year and a prominent presence in markets such as Spain, China, Germany and France.

Tourism—now in full crisis due to the pandemic—, the export of professional services, nickel and tobacco are the island’s main products. The Cuban economy suffered an 11% drop in its Gross Domestic Product last year as a result of the combination of restrictions due to COVID-19 and the U.S. sanctions that caused a serious lack of liquidity.

But Hernández’s export optimism seems to be supported by the reported success for premium cigars in other parts of the world in 2020: a report by the Association of Cigar Producers of the Dominican Republic indicated that that country had an export record of 1 billion dollars’ worth of machine-made and hand-rolled cigars, especially to the United States.

And the explanation given to AP by the leader of that organization, Hendrik Kelner, was that the sales success was due to the “stay at home” due to quarantines.

“When you’re in your office you can’t smoke…but when you’re working at home you can,” reflected Kelner who, however, highlighted that along with the increase in consumption and production some retail cigar stores in the world had to close because they did not adapt to online sales or establish other alternative marketing strategies.

It was also a good year for cigar producers in Nicaragua and Honduras, while a survey conducted by the Spanish Ministry of Health found that tobacco use increased during the pandemic.

Habanos S.A. does not have access to the U.S. market—to which countries such as the Dominican Republic, Nicaragua and Honduras do export—due to the embargo imposed by Washington on Cuba. Even so, the joint venture supplies 70% of the premium hand-made cigars sold worldwide—not counting the United States.

Cuban farmers also had their challenges due to restrictions imposed to curb the spread of COVID-19, lack of supplies caused by U.S. sanctions and an unusual rainy season due to the passage of Storm Eta in November, but they came through.

“This year has been a bit difficult due to the epidemiological situation the country is going through, the climate has not been the most favorable for us, but we have to continue working, to see if we can achieve a good harvest,” Yankiel García, a farmer from Consolación del Sur, in the province of Pinar del Río, land of the most famous tobacco plantations in the world, said in an interview with AP.

García, his family and a dozen workers work on a nine-hectare farm, of which only three are cultivable, and which this season expects to deliver some 40,000 quintals of tobacco that will be taken to state factories such as Partagás in Havana, which in turn, will hand-roll it to deliver to Habanos S.A.

The farmer faced the lack of fuel for irrigation and the almost absence of fertilizers and pesticides that the State supplies and that this year, like almost everything on the island, are in short supply. But he still affirmed that Cuban cigars will continue with their tradition of excellence.