The emblematic Cuban sugar industry has been affected in the last six decades by many factors. Of the 156 sugar factories operating before 1959, 56 remain, and only 38 of them are grinding in the current harvest, which will not reach the 1.2-million-ton target either. 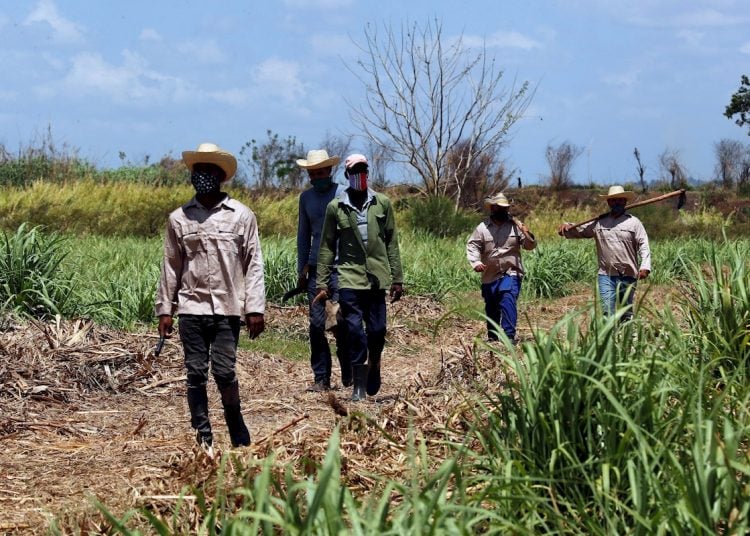 Farmers after finishing their work in a sugar cane crop, on April 29, 2021 in Madruga, Mayabeque (Cuba). Photo: Ernesto Mastrascusa/EFE.

Once a leader in the world sugar market, Cuba is far from recovering the fruitful production volumes of the past in an industry considered the driving force of the country’s economy, but which has failed to take off since its collapse in the 1990s.

Of the 156 sugar factories operating before 1959, 56 remain, and only 38 of them are grinding in the 2020-2021 harvest. And the 5.6 million tons of sugar collected in the year when the Revolution triumphed, or the seven and even eight million in the best seasons between 1970 and 1989, have been reduced to just over a million projected for the current harvest.

The emblematic Cuban sugar industry has been affected in the last six decades by the U.S. financial and commercial embargo, with losses of some 125 billion dollars—according to Havana estimates—and the impossibility of accessing the United States market.

Added to this are technological obsolescence, lack of fertilizers and fuels, low financial availability and other factors that slow down the development of this strategic sector’s contribution of foreign exchange with exports of sugar, alcohol (especially rum), energy and other derivatives.

This causes the frequent stoppage of production in the plants and the low quality of the raw material, which is essential in a long-cycle crop.

Of the factories that still operate, many do so with the drive, the “inventiveness” and the sense of belonging of their own workers, such as the Boris Luis Santa Coloma (formerly San Antonio) sugar factory, 53 kilometers east of Havana.

Added to this is the impact of hurricanes such as Irma, which cut down the slight growth experienced in 2011, after suffering in 2010 the worst harvest in 105 years with just one million tons.

That hurricane devastated more than 430,000 hectares of sugarcane in 2017 and left about 20 factories with broken roofs and deteriorated structures.

Nor will the target of 1.2 million tons be reached in the current milling started in December and which should have been completed at the end of April but will be extended, said the executive, until the May rains allow it.

Sugar, brought to the island by the Spanish conquistadors in 1493, comprised 80% of Cuban exports in the 1950s, and its main market was the United States, which reserved a preferential quota.

At the end of the 1950s, there were 161 sugar factories in Cuba, of which 131 were owned by wealthy Cubans and accounted for 60% of production, compared to 37% by U.S. businessmen.

At the triumph of the Cuban Revolution in 1959, the sugar plantations were nationalized, although initially, the mills remained in the hands of their owners. The goal was to diversify a single-crop economy and end dependence on the American buyer.

In 1960 Cuba made the last sugar export to the United States, of 1.9 million tons. Washington suspended the benefit of the preferential quota, one of its first economic sanctions on the island.

Cuba nationalized the sugar factories that same year, as well as the U.S.-owned mills, and the Soviet Union pledged to buy a larger percentage of the annual Cuban harvest until 1970.

The United States responded with what is known as the “Dagger Law,” which authorized then-President Dwight Eisenhower to abolish the Cuban sugar quota for the rest of that year.

This action is considered the origin of the U.S. policy (in force until today) of blocking the entry of foreign currency to stagnate the Cuban economy, dependent on sugar.

Given the U.S. restrictions, the Soviet Union assumed the Cuban sugar quota for the United States at preferential prices and began to export agricultural machinery and other inputs to the island.

The disintegration of the USSR in 1991 left Cuba without its main market, which triggered the serious crisis of the “special period.”

Five years later, the harvest dropped to 4.3 million tons and the U.S. Helms-Burton Act came into force, reinforcing the embargo and beginning to penalize third parties who invest in confiscated properties on the island, including the sugar industry.

The solution was to reduce costs and production capacity and allocate the land to other crops, in the midst of the drop in the world sugar price.

In 2002, Fidel Castro announced a “restructuring” of the sugar industry with the closure of 70% of the sugar factories, which reduced production capacity by half, and 60% of the sugarcane land was used for other crops due to its low profitability.

This metamorphosis included the creation of the sugar agroindustry business group (Azcuba), which took over from the Ministry of Sugar at the head of the sector to increase the industry’s efficiency.

However, after the rise in prices on the world market in 2006, the highest authorities of the island adopted the strategy of “producing more sugar,” recalling the stage in which this product was the backbone of the Cuban economy.