Gastronomy, from illusion to reality 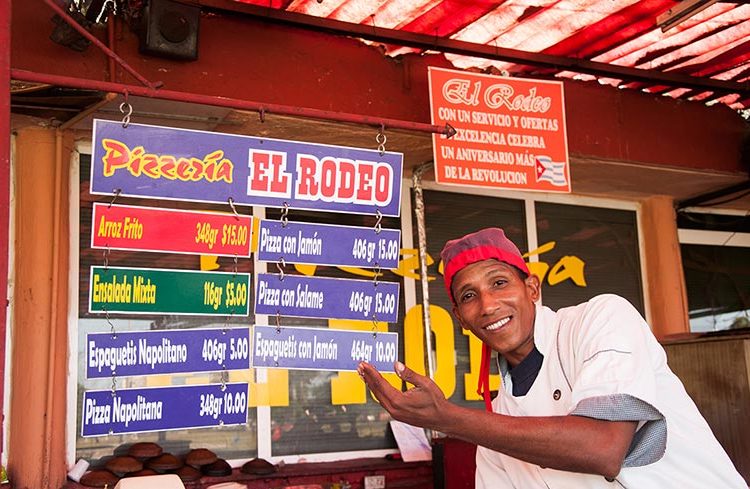 Although they pompously announce the exact weight of each dish, the portions are always lower / Photo: Raquel Perez.

The Cuban government has announced it will pass to cooperatives 13,000 cafes and restaurants belonging to the State. The move will give a new boost to non-state economic sector, whose numbers had stagnated in the half a million workers.

A lot of these entities are a wreck. Managers and clerks steal, add to the price and sell products they buy on the street, while the State gives them free premises, electricty and water to do their business.

The trucks that supply them deliver part of the goods “on the left”, inspectors sell themselves without compunction and Cubans consume products that have not passed even by minimum health checks.

They buy goods of dubious origin, fry a thousand times with the same oil and the portions are always smaller, but in restaurants they pompously announce that the fried rice weighs exactly 348 grams and spaghetti 406 grams.

The control that the State had on these businesses was merely an illusion. Handing them over to employees for them to manage at will is simply legalizing a situation that has existed since long ago.

In addition, other economic reforms allowed the opening of thousands of private cafes and hundreds of restaurants, pitting state gastronomy against a competition that it was not used to and for which it was unprepared.

With the new measure, the State will get rid of half of the inspectors-leeches it needs today, it will collect taxes, office rent and water and electricity. Besides it apply more stringent health checks to the extent that it ceases to be judge and jury.

This step also lighten the state bureaucracy of thousands of dedicated officials so far to supply goods to all food businesses, perform general accounting, pricing, regulate weights or maintain the premises.

In 1968, when the Revolutionary Offensive that nationalize small businesses was launched, it was believed that the State would be able to manage them. Four decades later and having tried many variants, most Cubans think it was failure.

In fact it is not about a particular incapability of Cuba, no government is capable of managing and absolutely controlling the entire economy of a nation. Those who have tried it ended up changing system like the USSR or model such as Vietnam and China.

The fact is that for the powers in government there will always be priority issues such as macroeconomics, health, energy, education, defense and tourism. It is unimaginable that a Council of Ministers can also solve the weight or the price of a hamburger.

This reform does not seem an ideological choice between socialism and capitalism, but between chaos and minimum order. It is impossible to plan an economy while much of it is underground and operate on the basis of stealing from the State.

Somehow, this reform on the national gastronomy aims to adapt the model to reality, after checking for decades, it is fruitless to try to squeeze reality into a preconceived model.

Towards a reform in Cuban gastronomy