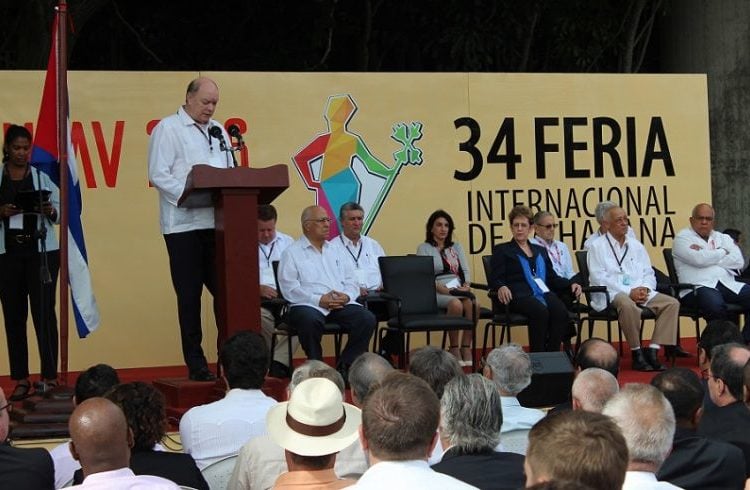 Turned into the principal commercial mart of Cuba and the Caribbean, the Havana International Trade Fair (FIHAV) will celebrate from October 30 to November 3, 2017 its 35th edition. The EXPOCUBA fairgrounds will again be the venue of this event established in 1983 and considered “much more than an exhibition of products or a forum specifically dedicated to business,” according to Cuban Minister of Foreign Trade and Investment Rodrigo Malmierca.

The organizers expect the fair will confirm the growth experienced in recent years, a reflection of the sustained interest by foreign investors and companies in the island. In 2016 FIHAV lived its all-time biggest edition with a record foreign participation. A total of 3,500 exhibitors from 73 countries were present. Around 150,000 professional visitors and the public in general toured the exhibition pavilions. The 2017 fair could represent a new record.

This event will have several singularities. The 35th edition of FIHAV will be the last with Raúl Castro as Cuban president. His announced retirement from power in mid-2018 makes the fair a propitious moment to consolidate his economic legacy, marked by some reforms and the opening to foreign capital. It could also serve to outline – or at least suggest – Cuba’s commercial directives in the coming years.

On the other hand, FIHAV 2017 will be the first edition after the change of policy toward the island promoted by U.S. President Donald Trump. One of the pillars of this new policy is prohibiting his country’s companies from doing business with companies linked to the Cuban armed forces and security services, which could reduce the U.S. presence in the commercial mart.

However, we’ll have to see what the real impact of Trump’s measures will be, given the opposition of diverse U.S. political and business actors. Also because of the exception made with sectors of the U.S. economy like agriculture and livestock and aeronautics, already present on the island and with participation in previous fairs.

In 2016 more than 40 U.S. companies displayed their products in the EXPOCUBA fairgrounds – located 25 kilometers from the center of Havana -, which doubled the participation of previous editions. The sectors represented then included the production and marketing of food products and beverages, construction, agriculture and transportation.

The last fair saw the participation of U.S. companies like JetBlue airline, the first to carry out commercial flights to the island in more than half a century; Crider Foods, a world leader in the production of canned chicken; Gardner-Gibson, a qualified manufacturer of waterproofing systems; and Smithfield Foods, leader in the marketing of packaged meat products, especially pork. In addition, representations from state governments, chambers of commerce and associations of businesspeople, which could be repeated in this edition.

Together with the awaited U.S. presence, despite the Trump administration, FIHAV 2017 should have a large backing from companies from Spain, China and Russia – Cuba’s important trade partners -, as well as from Latin America and the Caribbean. It is also expected that countries like France, Italy and Japan will maintain the growth of the preceding fair. This growing foreign participation is viewed by the Cuban authorities as proof of the international rejection of the U.S. blockade on the island.

Among the attractions of the upcoming edition will be the presentation of the new Opportunities Portfolio, through which the participating companies will know the most favorable areas to do business in Cuba. Also the promotion of investments in the Mariel Special Development Zone, one of the spearheads of the Cuban economy at present.

In 2016 the portfolio presented 395 projects, which represented an investment possibility of about 9.5 billion dollars. Sectors like agriculture and food, technology and tourism were strengthened in it, as well as the production of energy and oil prospecting, which continue among the priorities of the island’s development.

In addition, FIHAV 2017 will host the second edition of the Business Forum, a space initiated last year that seeks to bring about a rapprochement between Cuban businesspeople and foreign investors. In 2016 around 100 businesspeople from 38 countries participated, and they set up more than 240 meetings with national entities.

As Minister Malmierca has recognized, the process of economic updating being carried out by the Cuban government sees foreign investment as “a source of development and a means for the access of capital, technologies, markets and management experience that contributes to the solution of important structural imbalances and productive links.” FIHAV 2017 will thus be a significant space to confirm his words. A Cuban door open to the world.

Contradictory faces of a hurricane