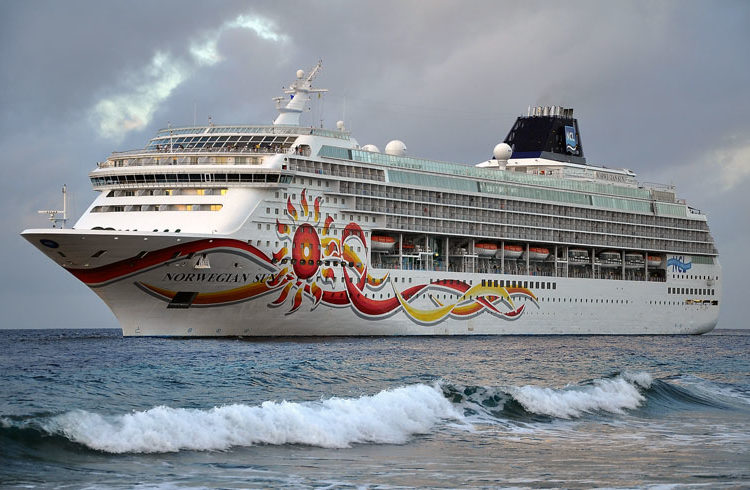 The Norwegian Sun will start sailing to Havana in 2018. Photo: Maritime Connector.

Norwegian Cruise Line is seeking to consolidate itself in Cuba. Despite the new Trump administration policy toward the island, the U.S. cruise line announced the expansion of its Cuban itineraries with the incorporation of a new ship.

The Norwegian Sun, with a capacity for close to 2,000 passengers, will start sailing to Cuba starting May 2018. It will depart from Port Canaveral, in Florida.

The trips, which are already being marketed with a limited time promotion, will last four days and include a stopover in Key West before arriving in Havana.

In the island’s capital, Norwegian’s passengers will remain one day and one night, during which they will be able to visit famous sites linked to Cuban history and culture. Among the places recommended by the company is especially Old Havana, the Fábrica de Arte Cubano and Tropicana Cabaret.

In addition, “Ernest Hemingway fans will be delighted with the new itinerary” and “will be able to follow the footsteps of the famous author, visiting the Ernest Hemingway Home & Museum in the historic core of Key West and Finca Vigía in the small working-class town of San Francisco de Paula in Cuba,” the cruise line’s note points out.

The Norwegian Sun, which in April 2018 will undergo a two-and-a-half-week-long revamping before sailing to Cuba, provides exclusive attention to its guests. The ship has 16 restaurants, 12 bars and salons, and has entertainment options for all ages.

This itinerary joins that of the luxury Norwegian Sky, which started traveling to Havana last May. With conditions to accommodate more than 2,000 passengers, the cruise ship offers an all-inclusive service with departure from Miami and a programmed stopover in Great Stirrup Cay, a private island belonging to the cruise company in the Bahamas.

The Sky’s trips, initially announced until December 2017, were extended up to 2018. This way, the number of journeys previewed by the ship was expanded up to 32, with four days of sailing and a one-night stay in Havana.

Andy Stuart, president and CEO of Norwegian Cruise Line, when announcing the extension of the journeys commented that Cuba is a spectacular destination and that they were having an incredible demand from their clients to enjoy the beauty and cultural wealth of Havana and its people.

Based in Miami-Dade County, Florida, the company sails throughout the world and has among its distinctions a recognized gastronomic service and entertainment in the brand’s 15 ships.

In relation to its trips to Cuba. Norwegian specifies that its proposals follow the regulations established by the Office of Foreign Assets Control (OFAC) of the U.S. Department of the Treasury. According to these regulations, the cruise ship line can offer “transportation services on board ship to authorized travelers, directly or indirectly, between the United States and Cuba.”

The Norwegian Cruise Line Holding’s note also points out that it will continue working with the Cuban and U.S. governments to follow any change of policy and regulations between both countries so that the brand can offer its guests a wealth of educational and cultural experiences in Cuba.

The cruise line’s announcements coincide with OFAC’s updating of the clarifications about the new U.S. policy toward Cuba. As part of them the individual people-to-people trips will be eliminated and certain categories of group educational trips in support of the Cuban people will be affected.

The reservations to travel on U.S. cruise ships have not been affected.

However, OFAC has still not specified the date for the release of the new regulations and insists that the announced changes will not come into force until the new regulations are issued. This means that until then the trips to Cuba will be allowed under the 12 categories authorized by the Obama administration.

Norwegian Cruise Line Holdings began its trips to Havana on March 9, with the arrival of the Marina cruise ship of Oceania Cruises. The latter has also announced itineraries for the island for November of this year and 2018.

Other U.S. cruise companies today have the island among their destinations. Carnival, whose Fathom line reopened the maritime port between both countries in 2016, is marketing trips to Havana on the Carnival Paradise, the company’s principal line’s ship in which more than 2,000 guests can travel.

Pearl Seas and Royal Caribbean cruise ships have also docked in Cuba, with plans to continue until next year.

In 2016 the island for the first time surpassed four million tourists, out of which more than 100,000 arrived on cruise ships. For 2017 it is expected that 4.7 million travelers will visit the island, 370,000 of them on cruise ships, with the U.S. cruise line companies playing a leading role.

In May, the registered number of visitors from the United States to Cuba was more than 284,000, similar to all those who arrived last year.

According to a projection by the U.S.-Cuba Trade and Economic Council, the trips to the island by the principal U.S. cruise line companies will represent more than 420 million dollars in incomes between 2017 and 2019.