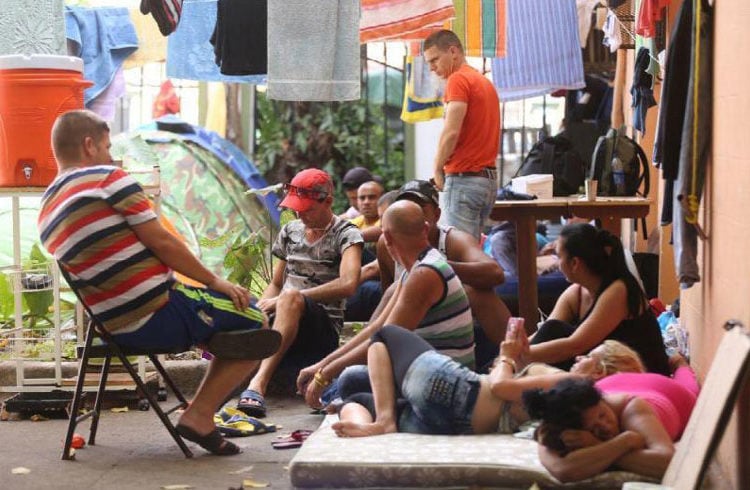 The Panamanian government is coordinating the exit of the last 95 Cuban migrants stranded in that country after the end of the U.S. “wet foot / dry foot” policy.

According to the director of the Panamanian National Migration Service (SNM), Javier Carrillo, his government is just waiting for the island’s migrants to reach a decision so they can “return to their country.” “That is basically” the only thing that is missing, he said.

Carrillo, who did not specify the date for the Cubans’ departure, advanced that they would be given an “economic compensation” so they can start their own business in their country. Local media indicated that the contribution would amount to 1,000 dollars for each migrant.

Meanwhile, Panamanian Deputy Minister of Security Jonattan Del Rosario said to AFP news agency that the “voluntary” repatriation to Cuba will also be accompanied by an offer of doing the paperwork for a “trader’s” visa to be able to return to Panama with a permit to purchase products and sell them on the island.

Del Rosario added that those who reject that possibility “will receive an order” from the National Migration System to “leave the country” in the period established by law. According to the official, the Cubans have up to July 31 to make a decision.

However, on reiterated occasions many of the migrants have expressed that they do not want to return to Cuba but rather continue their journey to the United States or remain in Panama.

The Cubans initially were staying in installations of the Caritas Pastoral, but after an agreement with President Juan Carlos Varela and the Catholic Church they were taken to a government shelter located in Los Planes de Gualaca, in the province of Chiriquí, close to the border with Costa Rica.

At that time, Varela – who had previously given an ultimatum to the island’s migrants – announced they could temporarily continue in his country, as long as it was in shelters with the appropriate conditions.

Last January, then President Barack Obama announced the end of the “wet foot / dry foot” policy approved in 1995. This regulation gave Cubans the possibility of obtaining permanent residence one year after arriving in U.S. territory, even if they did so illegally, as long as they were not intercepted at sea.

The decision had an impact on the situation of hundreds of Cubans who were trying to reach U.S. territory by land through Central America.

Some 500 accumulated in Panama last March, when the Central American country signed an agreement with Cuba for the paperwork to deport the Cubans, two months after the change of U.S. policy. Starting then the number has been decreasing.

The migratory phenomenon of the Cubans through Central America grew in recent years with the thaw between Havana and Washington. The phenomenon reached critical levels in late 2015 when Nicaragua closed the way to the Cuban migrants, which led to thousands of then being stranded in Costa Rica and Panama. An agreement between several governments of the region made it possible for many of them to be sent to Mexico by plane.

In 2016 Panama received more than 27,000 irregular migrants, many of them Cuban, although there were also Haitians, Africans and Asians. They entered the country through the Darién jungles, the natural border with Colombia, in their transit toward the United States, according to official data.

Also in 2016 more than 5,000 Cubans were rescued by the U.S. Coast Guard and more than 56,000 arrived in the United States through different means, mainly through the Mexican border.

After the end of the “wet foot / dry foot” policy the entry of Cubans to the United States through illegal means has notably decreased. Many were detained in Mexico, which initiated a process for their regularization or return to the island.

A report sustains that in the first semester of 2017 the number of rafters (322) decreased by 86 percent with respect to the figures of the previous year (2295). For the first time in seven years, in April the U.S. authorities did not report an interception.

In the first months of 2017, Mexico and other nations of the region returned to Cuba more than 900 illegal migrants. Even the United States initiated the devolution of Cubans who arrived in an irregular way to their territory.