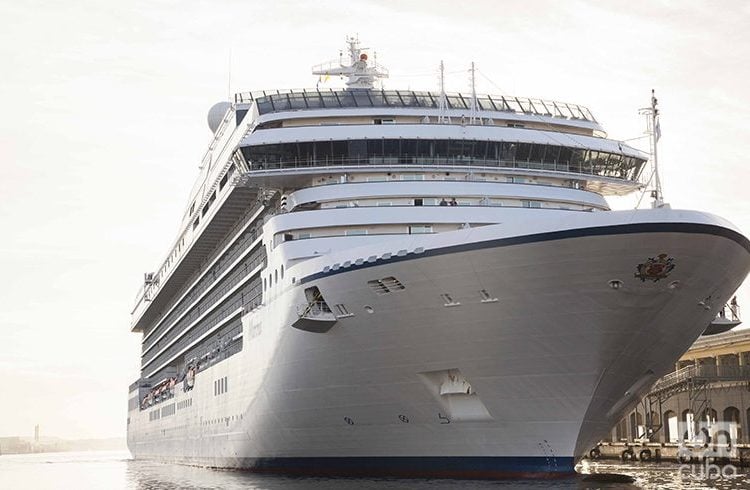 The U.S. company, one of the world’s most important in the cruise business, revealed its financial results in the second quarter of 2017, and the itineraries to the largest of the Caribbean islands confirmed the rise in its sales.

This, despite the new policy announced by the U.S. administration toward the island, which could restrict certain categories for Americans’ travel to Cuba.

“In terms of benefits for the quarter, no new destination has had Cuba’s impact,” said the company’s president and CEO, the Cuban-American Frank Del Río, during a telephone conversation. “Our trips to Havana have been a homerun.”

Norwegian started sailing to the island in March and until the close of June it had made 11 trips that included a stopover in the Cuban capital. Its three cruise lines – Norwegian Cruise Line, Oceania Cruises and Regent Seven Seas Cruises – have already visited Havana.

According to Del Río, the routes of the Norwegian Sky cruise ship – which started traveling to Cuba in May – have obtained much higher prices than the Bahamas itineraries that the ship previously sailed, which in the opinion of the company are sustainable.

The Sky’s four-day trips to the island, with a capacity for more than 2,000 passengers, were extended first up to December and then up to 2018.

Cuba is a spectacular destination and we are having an incredible demand from our clients to enjoy the beauty and cultural wealth of Havana and its people. We are very happy to provide new opportunities to our guests to experience this incredible destination in 2018, commented Andy Stuart, president and CEO of Norwegian Cruise Line.

For 2018 the company has already announced new routes to Cuba with a second ship, the Norwegian Sun. With the possibility of transporting close to 2,000 passengers, this cruise ship will start sailing to Havana starting May and its departure will be from Port Canaveral, Florida.

In addition, the demand is also “extraordinarily strong” this and next year for Oceania Cruises trips, according to Del Río. Next year, the three Norwegian cruise lines will again sail to Cuba.

Cuba’s rise coincided with a better quarter than expected by the company, which saw its incomes grow to 1.3 billion dollars, a 13.3 percent increase. Profits rose from some 145 million dollars in the second quarter of 2016 to more than 198 million dollars this year.

The net yields, or net incomes per day of capacity, increased 7.2 percent.

“The stars precisely aligned themselves,” commented Del Río in relation to this. “The positive feeling of consumers in the United States and the principal international markets have given rise to a solid environment of reservations that continues being one of the strongest in recent history.”

According to the president and CEO of Norwegian Cruise Line Holdings Ltd., “the three brands have benefited from the strength in each one of their respective markets and contributed to our profits in the second quarter.”

Based on these results, the company readjusted its calculations for all of 2017, a year in which it hopes to earn record incomes. The “strong booking tendencies in all the markets” contribute to the second half of the year, according to Wendy Beck, executive vice president and financial director of the company.

Americans have not lost the desire to visit Cuba, despite the announced restrictions in the travel and business possibilities with Cuba, although these do not include the cruise trips.

According to travel to Cuba specialists, cited by Sun Sentinel, business continues being strong waiting for the definitive regulations that should be announced soon.

It has been of great benefit for us, commented Ampa Manzella, travel manager of Cultural Explorations Cuba in Delray Beach. More business is coming in, she added.

With the window of individual trips to the island about to close, the travelers who could have opted for purchasing online air tickets and stays in hotels on their own are now going to travel agencies with a federal permit like Cultural Explorations, said Manzella.

According to what is defined by the Department of the Treasury, people-to-people travel has no degree of educational purposes and does not involve a sponsoring organization subject to U.S. jurisdiction.

According to Manzella, the introduction of individual people-to-people trips during the Obama administration had decreased the business of the agencies that had a permit from the Office of Foreign Assets Control (OFAC).

The groups we now have are filling up, meanwhile, Peter Sánchez, CEO and cofounder of Cuba Tours and Travel in Miami, affirmed. In the long term, it will be good for my business model, he said.

For InsightCuba, in New York, the demand of consumers of their collective itineraries of persons from Cuba has recovered after having just fallen before and after Trump’s announcements of the new restrictions.

Now there is more clarity, business is starting to pick up, Tom Popper, the company’s president, explained. He said that in the last two weeks business has returned to 2016 levels.

Under the new policy announced by Trump, traveling to Cuba as tourists will continue to be prohibited for Americans. The trips will continue being circumscribed to the categories authorized by Obama, for educational, religious, family and humanitarian purposes, even though adjustments will be made.

To the prohibition of people-to-people trips, the new policy will also affect certain categories of group educational trips, as well as trips to support the Cuban people, according to the most recent clarifications published by OFAC.

However, commercial flights and cruises from the United States to Cuba have not been affected until now, and new operators are entering the market.

Victory, which will start sailing to Cuba in 2018, has reported an increase in the bookings of U.S. tour operators concerned about reserving rooms in Cuban hotels that can have links to the military, something banned in Trump’s announcements.

According to Nierenberg, individual travelers are also trying to be incorporated to cruise groups to comply with the regulations. He pointed out that with the cruise ships there is no need for hotels because they have the ships.

Victory Cruise Line is planning to operate six cruises to Cuba between February and April after the recent approval of the Cuban government. In this way it will join Norwegian, Carnival and other cruise companies that now offer trips to the island from ports in the United States.

Its inaugural cruise ship to Cuba will depart from Miami on February 8 on an itinerary of 14 nights on board the 202-passenger Victory I. The journey will call at five Cuban ports: Havana, Santiago de Cuba, Trinidad, Cienfuegos and María la Gorda, thanks to the ship’s shallow draft.

The demand is greater than capacity and we hope to do it very well, Nierenberg pointed out.

After more than half a century, passenger seafaring trips between the United States and Cuba were re-inaugurated in 2016 with the arrival of Carnival’s Adonia cruise ship.

In 2016 the island surpassed for the first time the four million tourists, of which more than 100,000 arrived by sea. For 2017 it is expected that some 4.7 million travelers will visit the island, 370,000 of them on cruises, with the U.S. cruise lines playing a leading role.

In May the number of U.S. visitors to Cuba was more than 282,000, similar to all those who arrived last year.

According to a projection of the U.S.-Cuba Trade and Economic Council, the itineraries to the island by the principal U.S. cruise companies will represent incomes of more than 420 million dollars between 2017 and 2019.