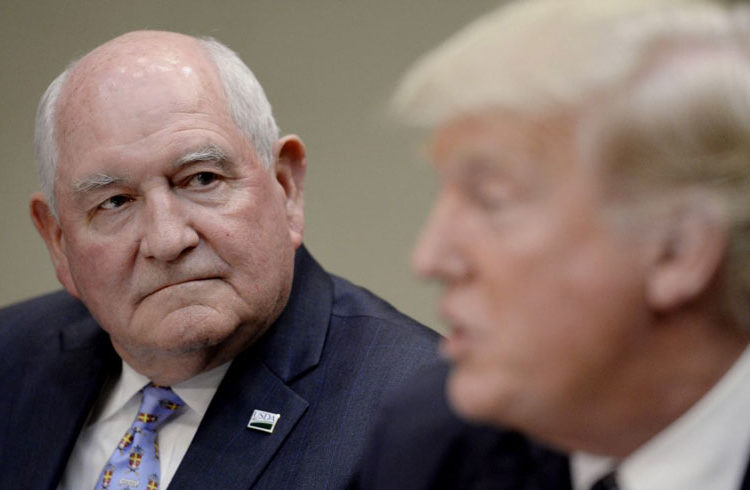 U.S. Secretary of Agriculture Sonny Perdue pledged to back the expansion of agricultural trade with Cuba in a hearing of the House Agriculture Committee.

In an exchange with U.S. Representative Rick Crawford (R-Arkansas), Perdue expressed his support for bipartisan legislation that would remove the restrictions on offering of private financing for the sale of agricultural commodities to Cuba.

This proposal, named Cuba Agricultural Exports Act, would modify the Trade Sanctions Reform and Export Enhancement Act that conditions U.S. trade with the island. The bill was presented in January by Crawford and Senators Heidi Heitkamp (D-North Dakota) and John Boozman (R-Arkansas).

In the House hearing, Representative Crawford pressed for Perdue to be a vocal advocate for U.S. farmers and ranchers as the Trump administration undergoes its Cuba policy review. “I hope you’ll be inclusive on the agricultural front,” he urged him.

Rick Crawford recalled that although U.S. farmers can sell their products to the island. The transactions are legally conditioned by “the cash up front requirement that is really an impediment to fully realizing the potential of that market.”

“I hope that you would be able to review that and endorse that bill because we want to try and move that forward as quickly as we can and provide greater access,” said the Arkansas Representative to Perdue during the hearing. “I think that’s something I would be supportive of,” the secretary of agriculture responded.

Sonny Perdue’s position is consistent with his previous statements. During his Senate confirmation hearing on March 23 he had already shown he was in favor of commercial exchange. “I think we would love to have Cuba as a client in many things,” he affirmed then.

In 2010, on a trip to the island as Governor of Georgia, the current Secretary advocated an increase in trade between the United States and Cuba and affirmed that he wished the two countries would improve their relations because “it would be the best result for both nations.”

A veterinarian and owner in the agribusiness sector, Perdue has a long record of promoting businesses with other countries. About him, President Trump has said that he has spent his life understanding and resolving the challenges faced by our farmers, while Roger Johnson, president of the National Farmers Association, said that he expected that his work would expand the market opportunities for all type of agricultural and livestock production.

James Williams, president of the Engage Cuba coalition, has recognized that since Secretary Perdue has traveled to Cuba he knows firsthand the significant opportunities for U.S. farmers in the markets emerging there. In his opinion, Perdue is a person qualified to influence the removal of the commercial restrictions to the export of food to the island, which would not only help U.S. farmers, but also give a boost to the Cuban economy and the capacity for agricultural production.

Cuba imports some two billion dollars in agricultural products a year, which represents a market of great possibilities for the United States. The removal of the commercial restrictions on food exports to Cuba could significantly increase U.S. agricultural exports and create jobs across the country, according to the promoters of a greater rapprochement with the island.

Days ago, Acting Assistant Secretary of State for Western Hemisphere Affairs Francisco Palmieri announced that the U.S. Cuba policy was still in a process of “complete review,” but advanced that, in his opinion, his government’s position would have “important differences” in relation to that of Obama.

These statements, together with those of Cuban-American lawmakers opposed to the “thaw” between both countries, created expectations about a possible announcement on the issue this May 20. But it seems it’s another smokescreen.

A White House spokeswoman commented to El Nuevo Herald that her government was considering carrying out an event for May 20 to mark the commemoration of the 115th anniversary of the emergence of the Cuban Republic, but Trump will begin an international tour this Friday and the review of the Cuba policy has not concluded.

She added that the Cuba issue is extremely complex and the president does not want to hurry, in addition to the fact that he will not be in the United States on May 20.

The review of the U.S. Cuba policy, announced in February by White House spokesman Sean Spicer, involves several federal agencies and is coordinated by the Homeland Security Council. Its possible results give rise to conflicting positions that go from the backing to a return to before, promoted by Cuban-American lawmakers like Marco Rubio and Mario Díaz-Balart, to a more numerous pro-engagement coalition.

In February, a delegation of congress people from both parties on a visit to Cuba stated to the press that, in their opinion, progress in relations between the two countries “is inevitable.” Democratic Senator Patrick Leahy said then that it is impossible to return to “a 50-year failed policy.”

In April, Mississippi Governor Phil Bryant from Havana urged President Trump to resume the talks initiated by the previous administration. A while later a group of high-ranking retired military did the same to their country’s government.

On May 1, a New York Times editorial dealt with what it called a “quieter” debate about Cuba in the White House, in which it pointed out the existence of a current that wants to reverse what Obama did and of a numerous pro-engagement coalition that is asking Trump to continue building on the foundation of engagement he inherited.

That is a position shared by numerous U.S. farmers and businesspeople, eager to position themselves in a market opening to foreign investment and global trade. Sonny Perdue, in his role of Secretary of Agriculture, could be an important voice in this scenario.