The Ark full of cartoons

Animotion: The secret life of cartoons returns as a transitional exhibition of the Children’s Audiovisual Festival La Espiral to El Arca Theater. In an attempt to bring the children and the protagonists closer to their favorite cartoons, the collection will remain open, from Tuesday to Sunday, from May 16 to June 30.

The sample gathers pieces created for productions of the Cuban Television, the ICAIC and the creative seal Cucurucho. Different moments of the process of stop motion animation are illustrated, along with a show of puppets who have been part of the Cuban audiovisual in animated films such as “Pófilfilo & Cascarón”, “The teacher”, “Awakening with Pelusín”, “Papobo” or the video clips “The crocodile” and “Casanova, Cecilia Valdes and Sleeping Beauty”. 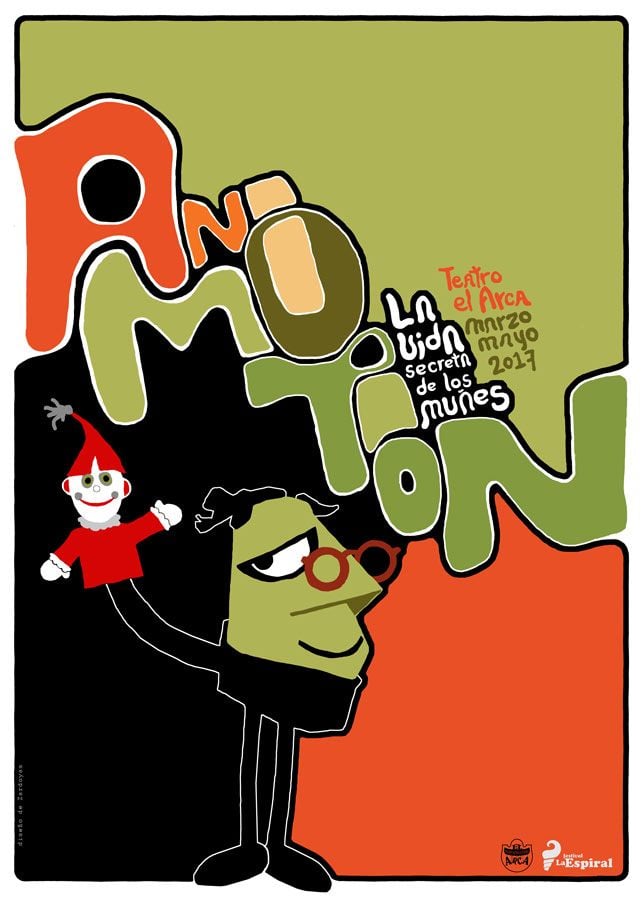 We do not have all the stop motion action figures that we wanted, because many of them have deteriorated due to the materials with which they are made of, but at least with this we raise children’s awareness about the technique. There is very little historiography about cartoons in Cuba, through the festival we tried that people see some audiovisuals that were not televised many years ago, because we were able to rescue some shorts films in very good quality, Ivette Ávila, director of La Espiral Festival, said to OnCuba about the premiere of Animotion, last March.

The designer Miguel LP will exhibit a personal exhibition in La Marca, studio-gallery of tattoos located in Old Havana, from this May 19. Mascarada is the title of this exhibition that gathers part of his work with masks and character design and serves as “homage to the cultures of the world, their beliefs and struggles, to diversity and color that surrounds us and we have inherited.” 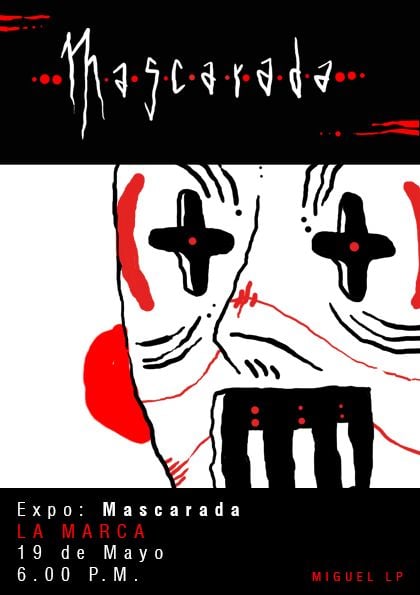 Water in the Roots

A sample on water – water as a component of life, water in religion, water in santería – titled Agua en las raíces, by the artist Santiago Rodríguez Olazabal, opens today at 5 p.m. in the Collage Habana Gallery (San Rafael St. #103 between Consulado St. and Industria St.). 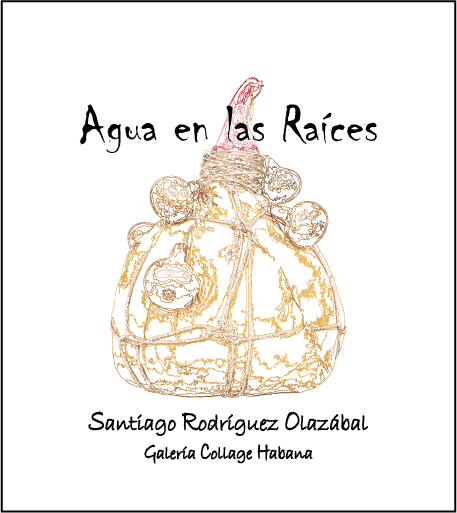 The Other in the plastic art

Servando Cabrera, Roberto Fabelo, Manuel Mendive, Ernesto Rancaño and Lesbia Vent Dumois. All of them and many other outstanding artists of Cuban art coincide in the collective exhibition Lo otro, inaugurated this Friday, May 19 at 6:00 p.m., the Víctor Manuel Gallery, located in the Cathedral Square, in Old Havana.

The Cubadisco Festival 2017 takes place in Havana from May 13 to 21, this time dedicated to the New Trova Movement. 140 record productions were nominated this year within the 29 categories included in the event, among them the album “Sobreviviente” of the duet Buena Fe, produced by EGREM, winner of the Cubadisco 2017 Grand Prix.

Presentations at the Cubadisco Festival this weekend:

Concert of Yissi and Bandancha in the space La Pérgola of the Pabellón Cuba at 4 p.m.

Presentation of Tony Ávila at 6 p.m. in the central stage of the Pabellón Cuba.

Tesis de Menta and the Sumo Group (Switzerland) will be at 6 p.m. in the Gardens from Mella Theater (Línea St. between A St. and B St., Vedado). 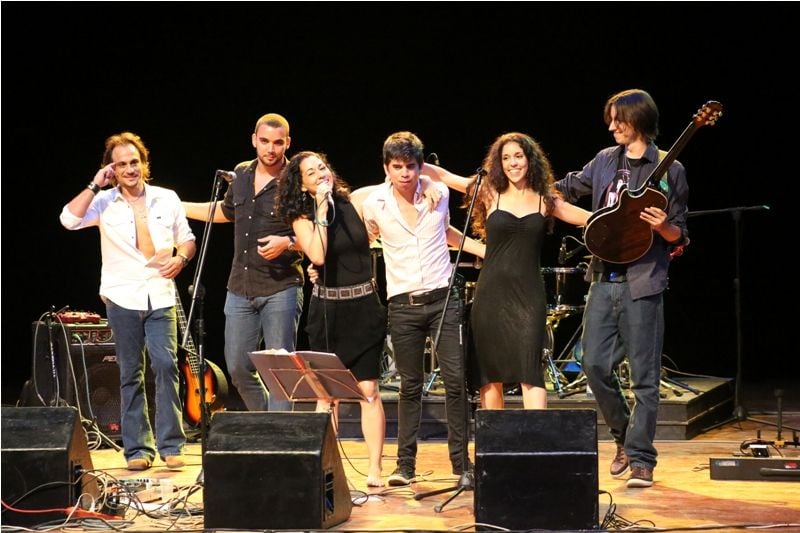 Achy Lan and Yoruba Andabo next to the group Iron Ladies from Brazil, as guests, will be presented in the Salón Rosado de La Tropical at 10 p.m.

Young Classics of the Son of Cuba will be presented at the Pabellón Cuba on Sunday, May 21 at 11 a.m., and at 6 p.m. Roberto Fonseca and his group Temperamento.

There are Van Van

The Van Van will be in concert the Habana Café of the Meliá Cohíba Hotel on Saturday 20 at from 11 p.m. to 1 a.m., promoting their new theme “Cubans”.

The first tribute concert in Cuba to the British band Pink Floyd by the Cuban rock band Vieja Escuela will take place today at 9 p.m. at the Astral Theater on Infanta St. 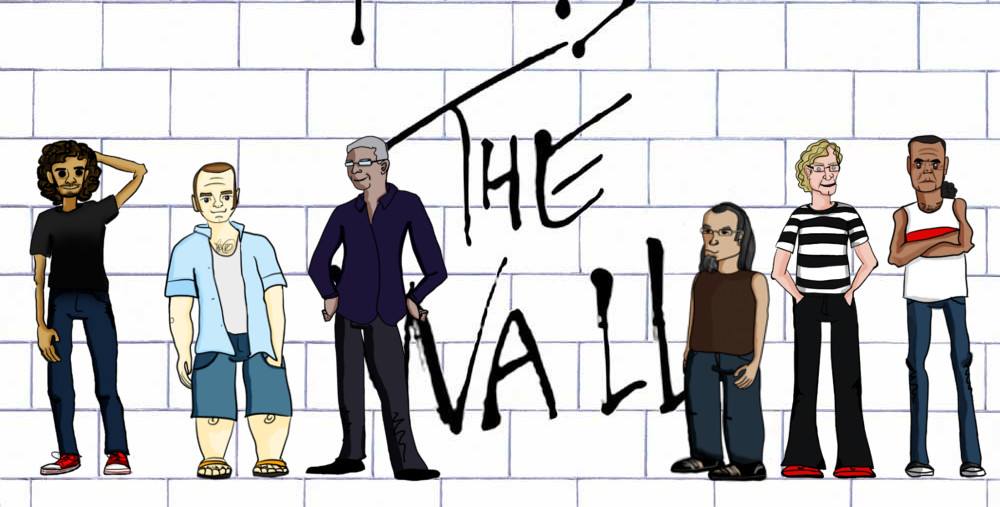 Trova in the West

The House of the Young Creator of Pinar del Río will host the IV TrovaSí Meeting of Troubadours this weekend. From 9 p.m. on May 18, 19 and 20, there will be performances from songwriters Yamira Díaz and the duet Pachibet, Luis Alberto Barbería, the duo Graffiti, Jorgito Kamankola and Athanai. The meeting will close with a concert by Pedro Luis Ferrer in La Piscuala Square of Milanés Theater in that city. 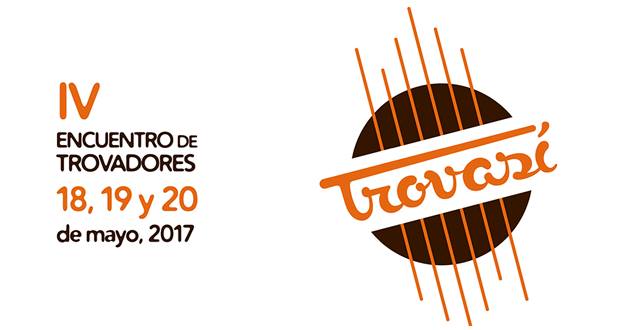 The annual concert season of the Ancient Music Group Ars Longa from the Office of the City Historian, Renaissance May, begins this weekend its program of concerts in the Church of Saint Francis of Paola in the Historic Center of Old Havana. 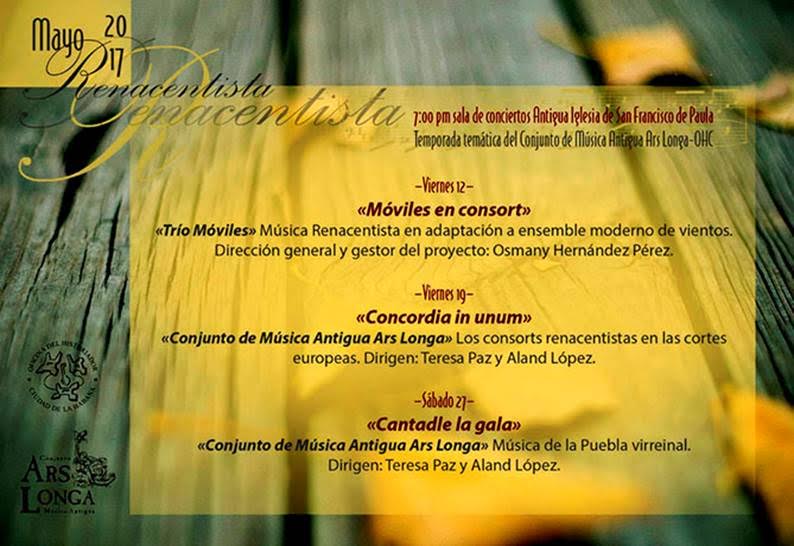 The Rocío in the America Theater

“From Dúrcal to Jurado” is the name of the musical performance tribute to Rocío Dúrcal and Rocío Jurado that will take place by several Cuban singers this Friday 19 and Saturday 20 at the America Theater at 8:30 p.m. 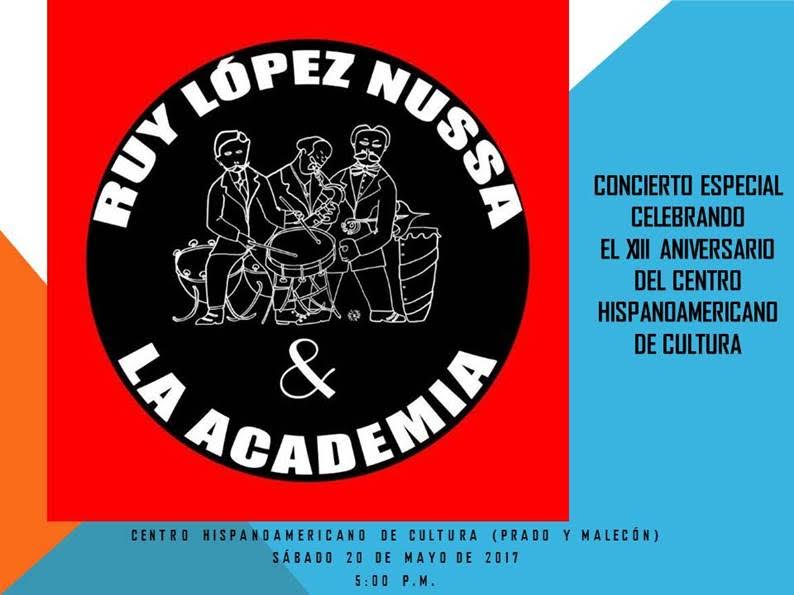 Spain in the Brecht

The Gaia Teatro Group directed by Esther Cardoso premieres the play Flechas del Angel del Olvido, by the Spanish writer José Sanchis Sinisterra, this weekend.
From May 19 to June 4 the play will be on the stage on Friday and Saturday at 8:30 p.m. and Sunday at 5 p.m. in the Tito Junco Hall of the Bertolt Brecht Cultural Center.

An inspector has arrived

This weekend the Hubert de Blanck Company reinstated An inspector has arrived, with the artistic and general direction by Orietta Medina, based on the text by the English author John Boynton Priestley. The functions will take place on Fridays and Saturdays at 8:30 p.m. and Sundays at 5 p.m. in the Hubert de Blanck Hall (Calzada St. between A St. and B St., Vedado).

An inspector has arrived talks about how someone’s life is marked by the dependence on others. From the suicide of a young woman of low class, it is realized an analysis of the English society before the World War I. You have to stand in front of the classic texts with a younger and more current mentality, but rigorous in quality. The theatrical text will come out as a result of a creative process after having armed the themes, purposes and the deeper objective, said Orietta Medina in 2016 about this piece, celebrating the company’s 25 years. 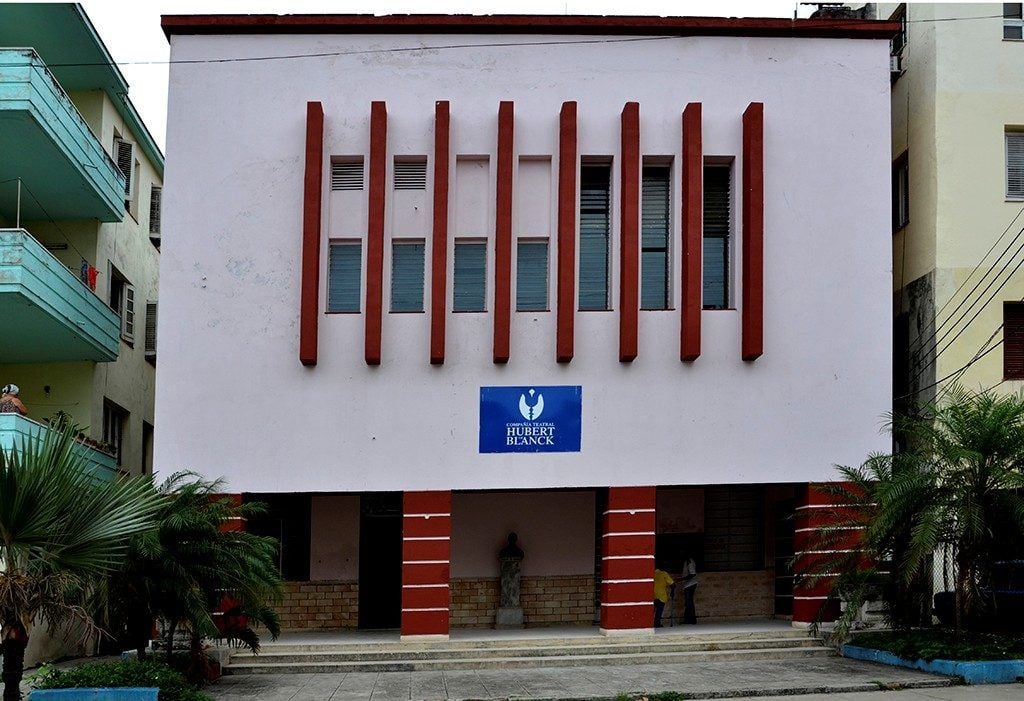 The 6th edition of the workshop Danza en construcción takes place from May 17 to 21, this time approaching to the work of Radhouane El Meddeb, a Tunisian creator resident in France. The dancer show will be presented to the public this Saturday, May 20 at 11 a.m. in the Lecuona Hall of the Great Theater of Havana Alicia Alonso.

Spanish cinema on the screen

Two films from 2016, a Spanish one “El hombre de las mil caras” and another co-production from Germany and Spain “El Olivo” will be presented this week at the Cultural Center Enguayabera, Alamar (from Tuesday to Sunday at 4:30 pm and 7:00 pm) and Infanta Multicinema (Room 2 and Room 4 at 6:00 pm).

Francisco Paesa has been a businessman, a banker in Switzerland, an international arms dealer, gigolo, playboy, diplomat, adventurer, con man and secret agent. At one point, he is betrayed by the government and has to flee the country. When he returns, everything has changed: he is ruined and his reputation as a con artist precedes him. In these circumstances, he receives the visit of the former director general of the Civil Guard and his wife, who commission him to hide 1,500 million pesetas in exchange for a million dollars. An ideal opportunity to take revenge on the government and improve its economic situation. With the help of his inseparable partner, he will orchestrate an intricate and masterful operation where truth and lies have diffuse limits. 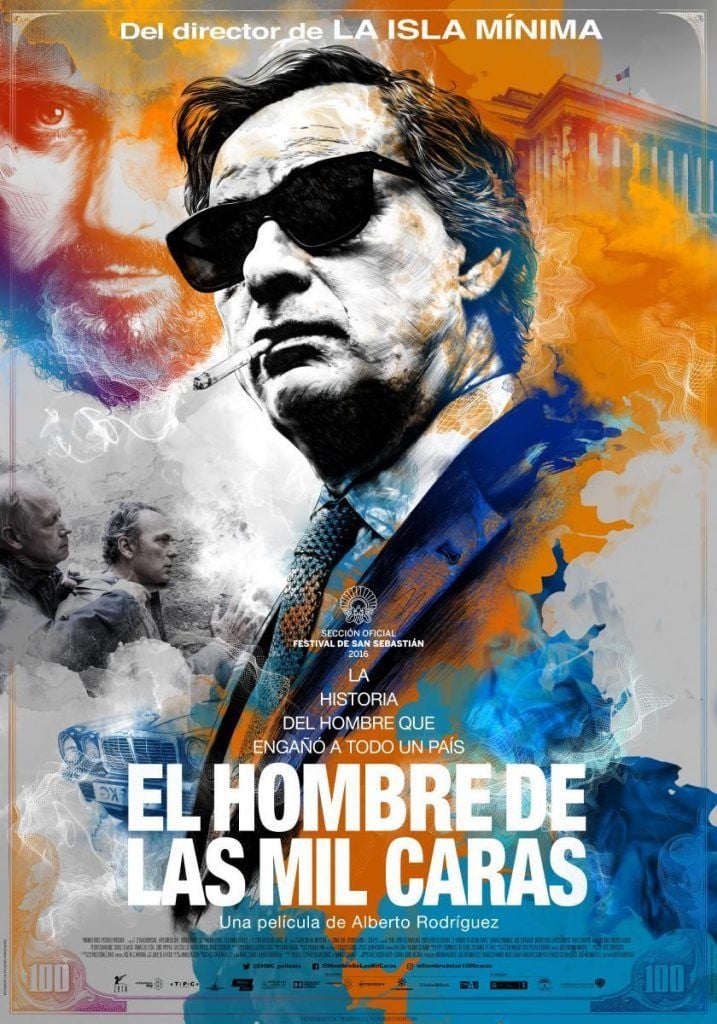 Alma is 20 years old and adores her grandfather, a man who has not spoken for a long time. When the old man also refuses to eat, the girl decides to recover the millennial tree that the family sold against his will. But for this, she needs the help of his uncle, a victim of the crisis, his friend Rafa and the whole town. The problem is to know where the olive tree is in Europe. 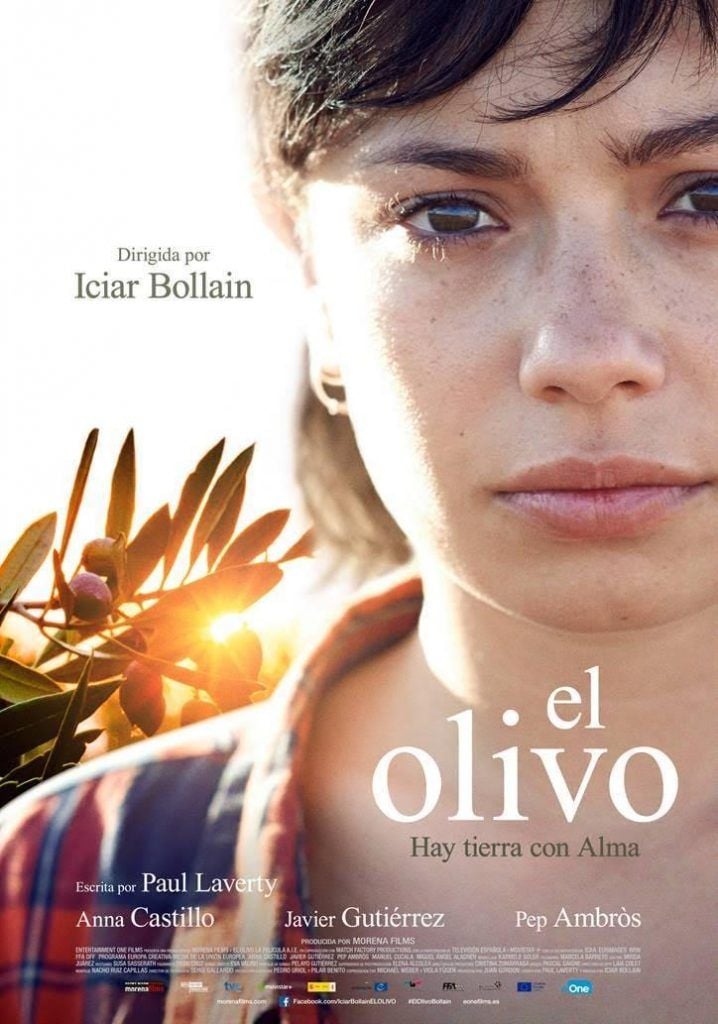