The measure, announced on the Mesa Redonda television program, applies to both foreigners and Cuban residents abroad. 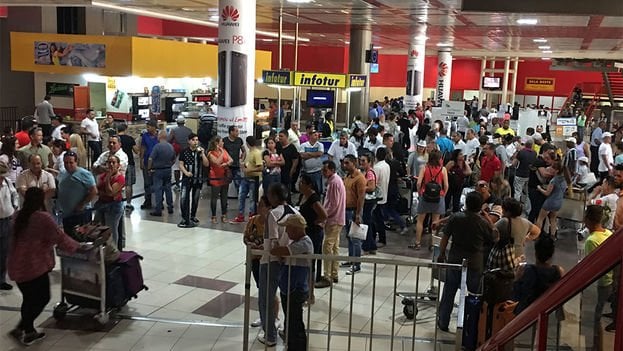 As of June 21, those who travel to Cuba will not be able to use the dollar in cash as part of the measures announced by the Cuban government on the acceptance of this currency in the country’s banks, given the difficulties currently caused by the U.S. blockade, according to statements by executives of the Central Bank of Cuba (BCC) on the Mesa Redonda television program.

This new provision applies to both foreign visitors and Cubans residing abroad who travel to the island while the measure is in force, executives clarified in that space. To cover their expenses, they will have to come with a currency other than the USD in their pockets.

However, those who travel with international cards accepted in the country will not have problems using them, said Francisco Mayobre Lence, first vice president of the BCC, who explained that this situation is another of the practical effects of the U.S. blockade.

In the case of those people who leave the country and have dollars in an account in freely convertible currency or another account in dollars, they can request the bank to withdraw a certain amount of money “in the currency they have at that time,” explained the vice president of the BCC, Yamile Berra Cires. And she added: “the bank can say that one day they do not have it and tell them to come the next or later, because the banks do not always have in their cash funds the amount of dollars that people with dollar accounts require.”

She also commented that those who wish to travel from Cuba abroad can do so with their physical dollars, since their use is not penalized by the Cuban State, “nothing changes when traveling,” said Berra Cires in information published on the Cubadebate website.

In the case of the accounts in freely convertible currency, the first vice president of the BCC clarified that they do not undergo any change in their usual use, either to buy in stores in freely convertible currency or to make purchases in the other markets in national currency, withdraw Cuban pesos at the ATMs and pay for electronic banking services, among other operations. Only dollars in cash will not be able to be entered into these accounts, as previously explained.

The ten-day period given by the Cuban government to deposit dollars in Cuban banks is for people who want to increase their balance because they have planned a purchase, but no one is obliged to physically deposit their money in these accounts before the 21st, since “the currency is not penalized. The person who acquires the currency to give it another use that is not to deposit in the bank, can do it,” indicated Mayobre Lence.