“There are several options that the State knows can be put in place in the shortest possible time.” 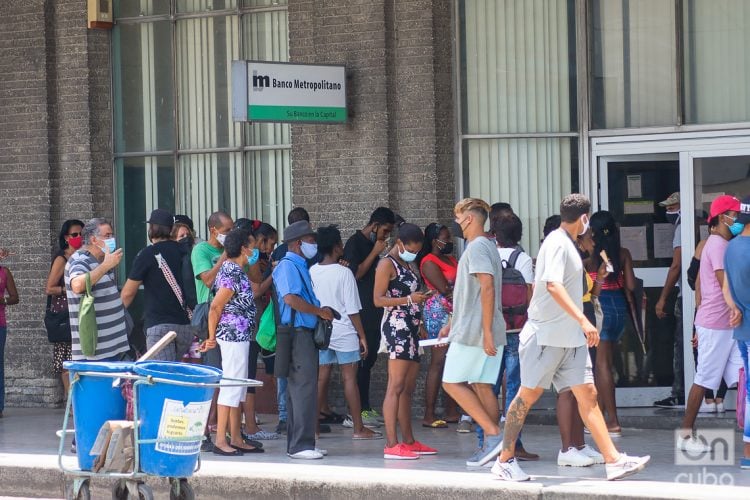 The issue is both on the street and on the networks. There and here. In Cuba, a second Mesa Redonda television program was dedicated to addressing details and clarifying doubts about the government’s announcement that deposits of USD in cash in the Cuban banking system would be temporarily suspended.

In that Mesa Redonda it was said, among other things, that as of June 21 those who travel to Cuba will not be able to use them in cash, which applies both to foreign visitors and to Cubans residing abroad while the measure is in force; that those who enter with international cards accepted on the island will have no problems with their use; that people who leave the country and have dollars in an account in freely convertible currency, can request the bank to withdraw a certain amount of money “in the currency they have at that time”; and that the accounts in this currency do not undergo any change in their usual use, either to buy in stores in freely convertible currency or to make purchases in the other markets in national currency, withdraw Cuban pesos at ATMs and pay for electronic banking services, among other operations.

To talk about the subject, we turn to economist Omar Everleny, who stands out with his own voice as a member of a generation of experts characterized by their knowledge, professionalism and mastery of the complex relations between economics and politics.

What are, in your opinion, the pros and cons of this new measure recently adopted by the Cuban government?

The measure adopted by the Cuban government has, in my opinion, more disadvantages than advantages, if they existed. The State may feel less pressure with the entry of dollars because after June 21 it will not have to keep new dollars in its vaults, crammed with those bills, according to the authorities. They will only worry about finding ways to deposit them in the international banking system.

However, the weight of this measure will fall in the first instance on the Cuban population and their families. Given the intensification of the U.S. blockade, the adjustment has fallen on citizens, who have increasingly had to resort to the markets in freely convertible currency due to the lack of products in the markets in CUP. Not because they have decided to have dollars, but because the economic crisis has led them to use them due to the creation by the State of the stores in freely convertible currency.

For those who send remittances, the move is becoming more expensive: they will now have to pay commissions to existing institutions to convert dollars into euros, which could mean less foreign exchange to their families. For their part, those who do not have someone to send them foreign currency will have to pay a high price for the euros that enter the market, with the subsequent deterioration of their purchasing power.

It is possible to anticipate that the State will receive, at least in the short term, fewer resources than before. In any case, the stores in freely convertible currency were out of stock, and that may be related to the Cuban government’s failure to honor its debts with its suppliers.

In conclusion, with this measure, the population will once again have another burden to bear on their shoulders.

Based on the elements available to date, what would be the projection of the euro/Cuban peso exchange rate?

The economy has laws that are enforced, regardless of the will of the people. If a good is scarce but in high demand, prices go up. More demand than supply of euros will then lead to a greater depreciation of the Cuban peso against the euro.

It is not necessary to remember that this currency is European and that tourists from that continent do not arrive on the island due to the problem of COVID-19. Nor that most of the Cuban immigration resides in the United States, where the dollar is the currency that circulates and there doesn’t exist the habit of having euros. In fact, you come to Cancun to shop and the Mexican is quite reluctant to accept euros. It is not very common.

Furthermore, more money transfers arrive from Europe than cash. This indicates that a good part of the sales of euros is made through the Cuban banking system, that is, through swift card transfers. Consequently, the informal street market will see its activity reduced. It will not have, at least for the moment, much cash in euros.

And the USD, is it depreciating, or is it skyrocketing?

There is very little time to be categorical and answer that question. Initially, the peso can be appreciated against the dollar, since after the 21st the people who did not put their dollars in the banking system could not do so. But they have them and they will continue to need Cuban pesos to pay for public services and agricultural products.

I can assure you that those Cuban pesos they receive will be above the official rate. It happens that, eventually, dollars will be scarce, but they will be demanded by a part of the population that needs to travel abroad, either for business or pleasure. Dollars will always be a means to be treasured by private businesses that sell in Cuban pesos because they will be used to buy supplies for their businesses or to have them as savings in the future.

The fact cannot be forgotten that despite being the enemy, and having blockaded the country, the United States continues to be the world’s leading economy. And its dollars will be backed for a long time and will remain the first convertible currency in most of the world.

There are economists who argue that this situation could have been foreseen, since it is not a new phenomenon, that is, although it has intensified, the embargo/blockade has been there since the 1960s, affecting the entire Cuban banking system.

I agree with them. The blockade, in effect, has been present in the lives of most of the inhabitants who live on the island today. It was reinforced by Trump practically from the beginning of his mandate. And as a gift they left the absurd inclusion of Cuba in a list of countries that do not collaborate enough in the fight against terrorism.

It was something that had to be expected would happen: the impossibility of making cash deposits in the international banking system. Then indirect measures should have been taken to stimulate the use of other currencies, let’s say more stimulating exchange rates for deposits in other currencies, payments to small suppliers that are in the country, to which the Cuban State owes small amounts of dollars, among other possible actions.

The high price of products in foreign currency in stores is more than known, due to the taxes that almost always exceed 240%. That is why the money that is said to be committed is not only what must be paid to the suppliers of the money paid by the population. A fridge was bought, for example, for $100 and the price in stores is about $240, but the suppliers are owed only 100, so the other 140 are committed to other destinations, which may be a reasonable and logical part to purchase other products.

Why not stimulate more virtual purchases with existing payment gateways abroad, although prices are really more than abusive, in the most dynamic ones?

I would wonder how current tourism investments continue to be financed in the case of a tourism that would not be recovered, at least until 2023, and where almost the entire hotel plant is paralyzed. Again, I believe that the State should not make the financial adjustment fall only on the Cuban population.

What will be, in your opinion, the greatest impact of this new measure?

This measure should have a high impact on reducing purchases by individuals, who will be much more selective when making them, with a huge sacrifice in consumption because their deposits will begin to go down. Stores, in turn, will begin to decrease their stocks in warehouses because the state cannot honor its debts with suppliers. That is, the adjustment puts the population at the center.

What remains then, resignation? I think not. There are several options that the State knows can be put in place in the shortest possible time. All should be aimed at increasing the supply of domestic or imported goods, such as allowing increased imports — for commercial purposes or not — by the population. In other words, make customs restrictions more flexible; publish the new list of activities that can be carried out privately, together with the incentives for urban cooperatives; remove price caps on agricultural products, which have led to shortages, including pork in the capital. And an endless number of obstacles still existing.

I wonder: where are the increases in production in the state sector with the 15 approved measures, including the necessary wage increase and the 63 measures in agriculture? Doesn’t the new Cuban leadership believe that there are still many obstacles? And the last question: who is going to remove them? Because they have been talking about them for a long time…