Will there be obstacles for flights to Cuba? 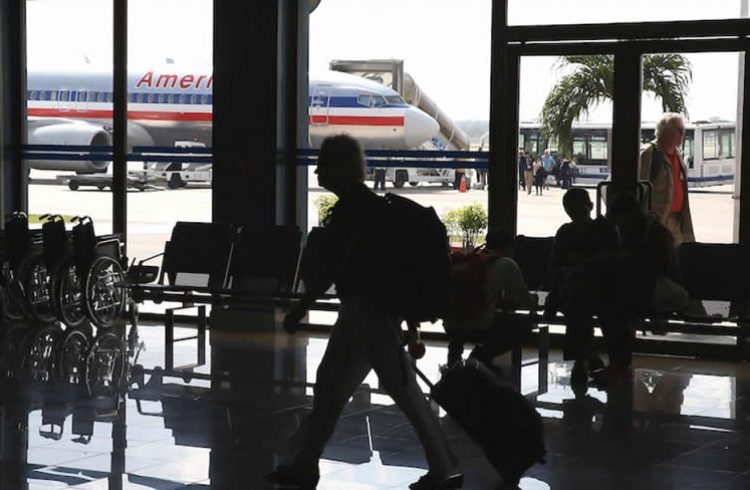 Last week the Transportation Security Administration for the United States (TSA) sent its representatives to visit the airports of Santiago de Cuba, Holguín, Cienfuegos, and Matanzas. Up until now news has only trickled through the Twitter accounts of Cuban foreign relations officials, but the moment has come when the topic of regular flights between Cuba and the USA is gaining more and more headlines.

The TSA officials were in Cuba from the 20th to the 30th of June and, in agreement with Josefina Vidal, the General Director of the US in the Ministry of Foreign Affairs in Cuba, these are reciprocal visits which have been going on for many years.

The presence in Cuba of these US Government officials takes on special significance now that the reestablishment of regular flights between the two countries could tread a path fraught with new obstacles.

An agreement signed between Havana and Washington in December 2015 predicts that there could be up to 110 daily flights distributed between the 10 international airports in the island.

This step is considered to be one of the key achievements of the bilateral relationship since on 17 December 2014 both countries made their willingness to work towards the normalisation of their relations public.

When the list of carriers approved to operate flights to Cuba, as well as the destinations to the island, were made public this summer it became clear that in the immediate future the TSA should give its nod of approval on matters of security and control to finally authorize the direct flights that must begin between September and October this year, according to the flight map drawn up.

On this the TSA administrator, Peter Neffenger, told reporters that “before we allow a flight arriving directly from Cuba, we will ensure that they do, in fact, meet all the requirements.” However, a week ago John Katko, New York Republican and chairman of the Subcommittee on Transportation Safety, along with Richard Hudson, North Carolina Republican congressman and former chairman of the Subcommittee on Transportation Safety, Michael McCaul, a Republican for Texas, current president of the National Security Committee of the House of Representatives and Henry Cuellar, Texan Democrat, introduced a bill that seeks to stop the resumption of direct flights to and from Cuba until the TSA report to Congress that the island’s teams and the training of its employees comply with the standards of the United States.

The legislators claim that the Government Accountability Office also has to confirm the security regulations, in addition to approving and agreement that would allow Air Marshalls that travel armed and undercover on the flights coming from Cuba.

The criticisms focus on Obama’s new policy. “At a time when the Obama administration is holding out the red carpet for Havana, the Cuban government refuses to be open and transparent with the Congress,” Michel McCaul complained several weeks ago after seeing an attempted trip to the island foiled.

The Cuban government denied visas to some of the legislators – Katko among them – who hoped to conduct a review of the security measures in the Cuban airports themselves.

This group, that now wishes to block the flights, has expressed its preoccupation with the lack of full body scanners in the Cuban airports. These are devices that can detect non-metallic bombs, which are used in some airports, despite the controversy that they have caused due to exposing the nudity of those people scanned.

“We still do not know if Cuba has the full body scanners and adequate explosive detection systems. If they have the technology to detect false passports or documents, or even how the aviation workers are examined and if they will let Federal Air Marshalls fly on commercial flights to Cuba” John Katko said in a press release.

On the matter, Neffenger, without specifying how Cuba met the US standards, responded that “there are a mountain of ways to effectively detect people (…) as you know, even in our own country we have airports in which we only use walk-through metal detectors. We do not have full body scanners but we use other methods to make up for this”.

Over a number of decades charter flights have been carrying passengers to and from the island, 90 miles from Florida. There has never been a registered attack or violent action.

Josefina Vidal answered OnCuba via Twitter that there has been an exchange on aviation safety for 15 years between the two countries, “as part of which the TSA has visited the Cuban airports that receive charter flights from the United States every seven years; and vice versa: the Institute of Civil Aeronautics of Cuba visit airports where flights to Cuba. In addition, the authorities in both countries have considered the security conditions of the respective airports and charters from the United States that have been flying to Cuba for over 37 years without having absolutely been no security incident to be adequate. ”

The Cuban diplomat asked “Does this campaign about the supposed lack of security of the Cuban airports that is now being discussed, with more and more support, have something to do with the elimination of restrictions of travel to Cuba?”

Annually Cuba receives over 3 million visitors from all the continents that come and leave the country via plane through the air terminals distributed thought the island.

DeLaurentis: "It is long and complex, but the normalisation is underway"