The new Law on Fisheries, which will come into force within 180 days, establishes that people who want to carry out this activity in rivers, reservoirs or in maritime waters must be officially authorized, except those who fish from shorelines and without using “floating means.” 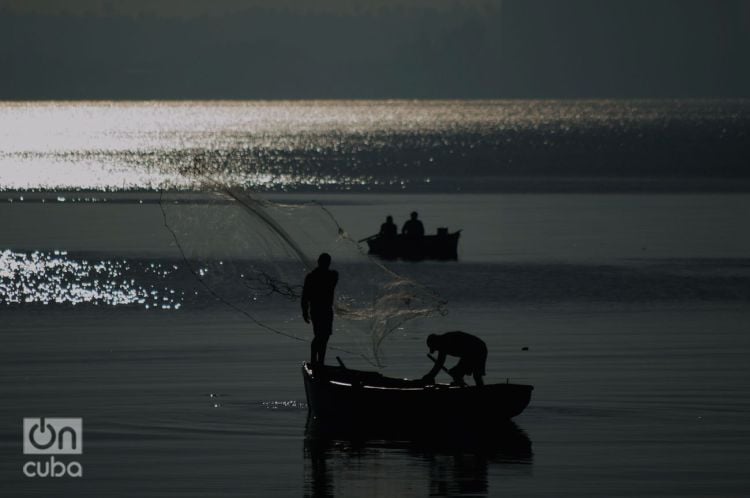 Fishermen in the bay of Matanzas. Photo: Otmaro Rodríguez.

The law that will regulate fishing in Cuba, passed in July last year, was published this Friday in the Gaceta Oficial Ordinaria No. 11, along with a decree and seven complementary resolutions, and will come into force next May.

Within 180 days, people who want to carry out this activity in rivers, reservoirs or in maritime waters must obtain an official authorization, except those who fish from shorelines and without using “floating means.”

Decree No. 1, with the regulation of the law, establishes four fishing modalities, determined according to the purpose for which the activity is carried out: commercial, sports, recreational and research fishing.

Within the commercial category, whose purpose is obtaining economic benefits, the categories of state commercial fishing are distinguished, carried out by specialized fishing enterprises; and non-state, carried out as self-employment, and other forms of non-state work.

This modality also includes fishing for “social self-reliance,” which aims to meet the needs of state entities.

The train of economic reforms in Cuba picks up speed (III)

In addition, the capture of aquatic species for handicrafts, exhibitions, substance extraction and other purposes―which do not include consumption as food―are also listed as commercial fishing.

Licenses for the practice of non-state commercial fishing in maritime waters are mainly limited to catching fish, in accordance with the legal norm.

The text of the law says that those who are licensed as fishermen must pay annual fees according to the type of motors their vessels have. The owners of motorboats will pay 100 Cuban pesos (CUP) per year, and 50 the owners of rowing or sailing boats.

To carry out commercial fishing in any of its categories, as well as sport and recreational fishing, people must obtain the corresponding license. Research is exclusive to state centers and institutions.

The regulation lists a series of species “exclusively destined for state commercial fishing,” and which, therefore, cannot be caught by private fishermen. Among these are lobster, crab, sponges, shrimp, eels and others.

The areas in which fishing activity is authorized are also governed by law.

Fishing is one of the most depressed economic activities in Cuba. Between 1976 and 1990 the Cuban fleet’s fishing in international fishing grounds averaged 100,000 tons per year, according to Granma newspaper.

But the obsolescence of vessels and the economic crisis caused a permanent drop in the volume of catches and fish imports, to such an extent that the per capita consumption of that food on the island became one of the lowest in the continent.