The current demographic situation is aggravating the effects that the exodus of the active labor force has on the economy. 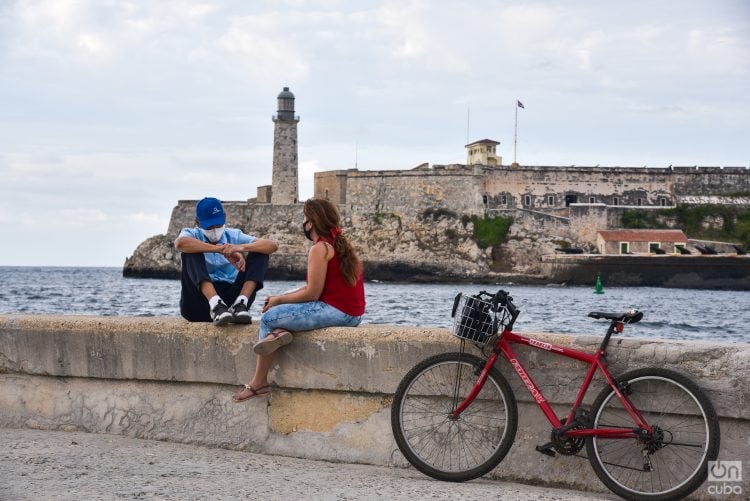 For several days now, various media have been writing with great intensity about the departure of Cubans to other countries. Their main emphasis has been Cubans’ priority to reach the southern border of the United States, to benefit from the legislation that favors them.

This tendency of Cubans to emigrate is nothing new, before and especially after the triumph of the Revolution there has been emigration from the island to other destinations, especially the United States, reporting a negative migratory balance1 every year, except for 1959, the year in which more people entered than left, with a positive migratory balance of more than 12,000 people.

It is not the objective of this work to analyze why Cubans leave, and what has caused the migratory waves in different periods, but to address the effects of this new crisis, focusing on the economy, on what has a high impact taking into account the composition of those who emigrate and the effects in the medium and long term.

Cuba today is very different from previous years from the point of view of its demographic indicators. In the past, many people with work experience emigrated, but they were replaced by others, given the high birth rates, there was guaranteed labor replacement.

Today the reality is different, the population decreasing in its entirety, with negative annual growth rates since 2017. With an age structure that is aging, which means that every day there are more retirees, but at the same time it is difficult to replace that labor force, because the population of 0 to 14 decreases every year.

The reality is that it is the youngest who emigrate the most, to any destination, many of them with upper secondary and higher education, since this level can allow them to adjust to the profiles of qualified labor force immigration programs. Among their aspirations is to revalidate the title they obtained in Cuba. In a study conducted a few years ago, it was said that around 86% of emigrants from the system of higher education institutions did so before the age of 40.

But the great flow increases with irregular emigration, which enters the United States under the protection of a preferential immigration policy, which challenges the debates on the current Immigration Reform and the approval of anti-immigrant laws in different States. The immigration legal framework that implements it includes regulations that guarantee admission and obtaining permanent legal residence, regardless of the route of entry and the country of origin of the Cubans arriving after one year and one day in that territory. Among them are the “Act to Adjust the Status of Cuban Refugees to that of Lawful Permanent Residents in the United States, and for other purposes,” Public Law 89-732 of 1966, known as the Cuban Adjustment Act, and another set of legal and administrative regulations. 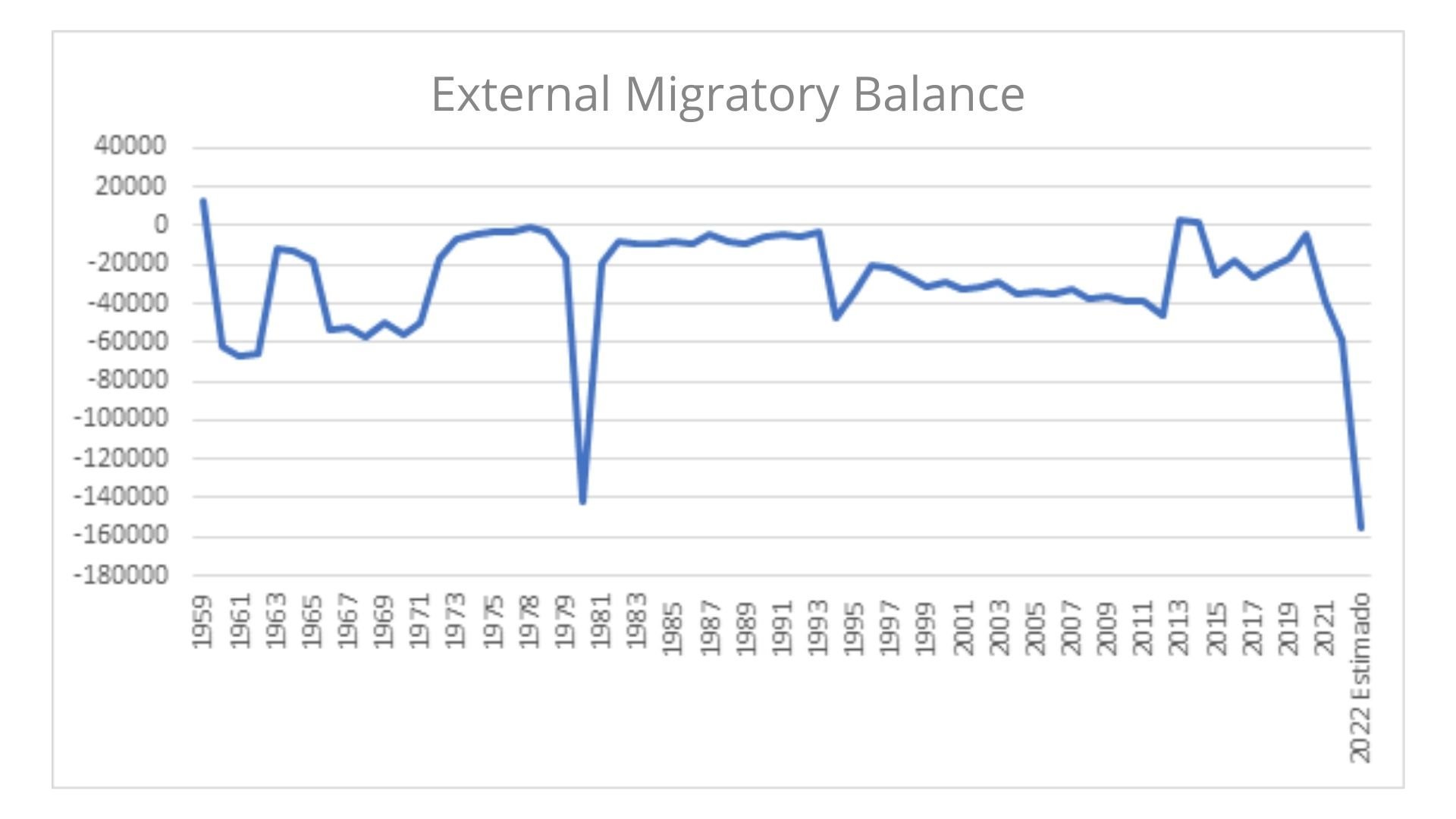 The previous graph shows the Cuban migratory balance from 1959 to date. The slight recovery shown in 2013 and 2014 is not very real, since it was when the Immigration Reform of 2013 came into force; in the Decree Law on which it is based, it is considered “that a Cuban citizen has emigrated, when they travel abroad for private matters and remain uninterrupted for a term of more than 24 months without the corresponding authorization.” Therefore, many emigrants who have entered Cuba before the two years, but who have permanent residence in other countries, are not considered as such. Two other factors have influenced these statistics: from March to December 2020 and between January and October 2021, the Cuban borders were practically closed due to COVID-19, and the U.S. Embassy in Havana stopped the Family Reunification Program since in 2017, and has been virtually closed without granting visas since 2020.

What’s interesting is that this new wave, which arises after the conclusion of the executive document known as dry foot-wet foot policy, with the anti-immigrant rhetoric of the past Trump administration, can become the largest outflow that has taken place from Cuba in the last 62 years, where it can even surpass the Mariel exodus. This trend is demonstrated by the fact that only between January and March 2022, 58,489 Cubans had entered through the southern border of the United States and numerous estimates suggest that the number of emigrants may exceed 155,000 in 2022.

It is logical to worry, what will be the costs for Cuba of this exodus of labor force? Who will be in the cane fields at the government’s request to save the sugar industry? We are not in the 1970s and 1980s, when the mobilization and the exhortation to the population made it possible to go to those fields, the Cuba of today is different, although the Cuban media insists on the word continuity. For a worker today, the material incentives are more important than the moral ones, the stimuli must be financial, but beware, the budget deficit is getting bigger, that is, if more salary payments are introduced, it is accompanied by inflation.

This new migratory wave is capturing a good part of the currency that circulates in the country, which cannot be absorbed by Cuban institutions, as they do not have mechanisms for this. Specifically, we are referring to the USD since it is a currency that cannot be used in the network of national stores, but it is the one that is being used to pay the high cost of the crossing to the southern border of the United States, which on average exceeds $10,000 per traveler. A very simple calculation, just estimating that some 100,000 people will arrive in the United States throughout 2022 at a cost of between 8,000 and 10,000 per person, we are talking about a value of between 800 million and 1 billion dollars that leave the country or do not arrive in the country. Keep in mind that only tickets to travel to the only destination that does not require a visa for Cubans — which is Nicaragua —, currently cost $4,500.

In conclusion, there are significant effects on the country’s workforce, not only now, but in the medium and long term. A large part of those who emigrate are women of childbearing age, therefore their departure contributes to maintaining the trend of low birth rates in the country; although there are other factors, this is worth taking into account.

The country is decapitalizing a mass of professionals from all sciences, in their age of knowledge generation, that is, they are eager to propose ideas or new perceptions about the national reality, but the model does not recognize them as it should.

Therefore, in addition to recognizing the problem, it would be useful to know what the Cuban state plans to do to reverse the trend that people have as one of their first options leaving toward another society. I do not believe that with slogans and diplomas this purpose is achieved, forceful and solid measures are needed, which are not the 163 measures to promote agriculture, nor the 15 for industry. There must be other ways out of the sad reality of the Cuban economy.

The blockade, which is a constant in this equation, affects all of Cuban society, but I think we have to look within and see what else the Cuban government can do to alleviate the existing deep economic crisis.

1 Migratory balance: It is the difference between migration inflows and outflows for the same reason; consequently, its positive or negative sign indicates that the entries exceed the exits or vice versa.