oniel_diaz
in Entrepreneurship in Cuba
0 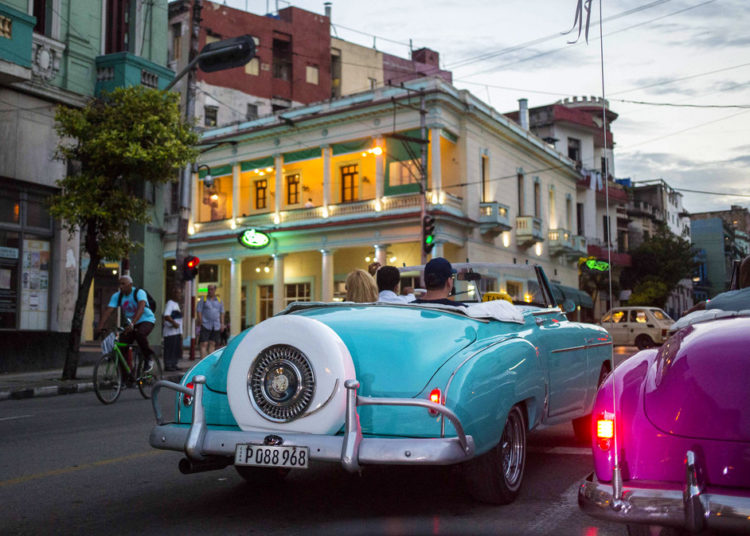 A few days before the year of hibernation of self-employment in Cuba was up, the new regulatory framework finally saw the light.

The very name with which this reorganization was baptized, “improvement process,” gave the idea that, when that day came, we would all celebrate the appearance of a group of solutions that would put just order in the life of private businesses. However, the bottle for the celebration again will not be opened.

It’s not that there aren’t positive aspects in the new regulations. They do exist. Having to use contracts for the use of the workforce, the increase in the limits for authorized expenses to deduct for the payment of taxes on personal incomes and the penalization of discriminatory attitudes due to skin color, gender and sexual orientation are good examples. The experiment of transportation in Havana also has potentials, as long as it is possible to attract private taxi drivers and transport workers.

But the first thing that stands out after studying the legal regulations is that the solution aimed by them for the problems will continue being expressed in the daily life of the businesses. Its real causes were not tackled: the black market, the fiscal indiscipline, the use of name lending or “figureheads” and other illegalities will survive this “improving” attempt.

In societies much more organized than ours and with solid control mechanisms, the struggle against this type of illegalities is the daily bread of governments. It is not very probable that among us they be contained through administrative measures without structural changes and economic measures.

In the published documents there is abundant bureaucracy, paper work, inspections and inspectors, control agencies and levels of approval. They are the same mechanisms applied in other spheres of national life and which have demonstrated little effectiveness.

The authorities have insisted that they are meeting some of the requests made by the private workers themselves. But those asked for out loud and which would have a greater impact continue being conspicuously absent.

We continue lacking wholesale markets (in eight years only one has been opened). We continue yearning for a realistic and flexible tax system. We want the authorization to make commercial imports.

Something of the most transcendental among what has been announced is the new mechanism for the request and granting of permits, especially in the group of economic activities most in demand and which were “frozen.” A written request will be presented containing, among other things, an affidavit on the origin of the financing and the investments to be made to start the activity.

In addition, new levels of assessment of the businesses appear for several permits in the Municipal and Provincial Administration Councils.

Through multidisciplinary groups at both levels, depending on the type of activity, the proposals are assessed case by case to certify that what is established by law is met. After the approval, which can take between one and three months, the General Supervision Department must visit the business to certify that it meets the characteristics approved for it. 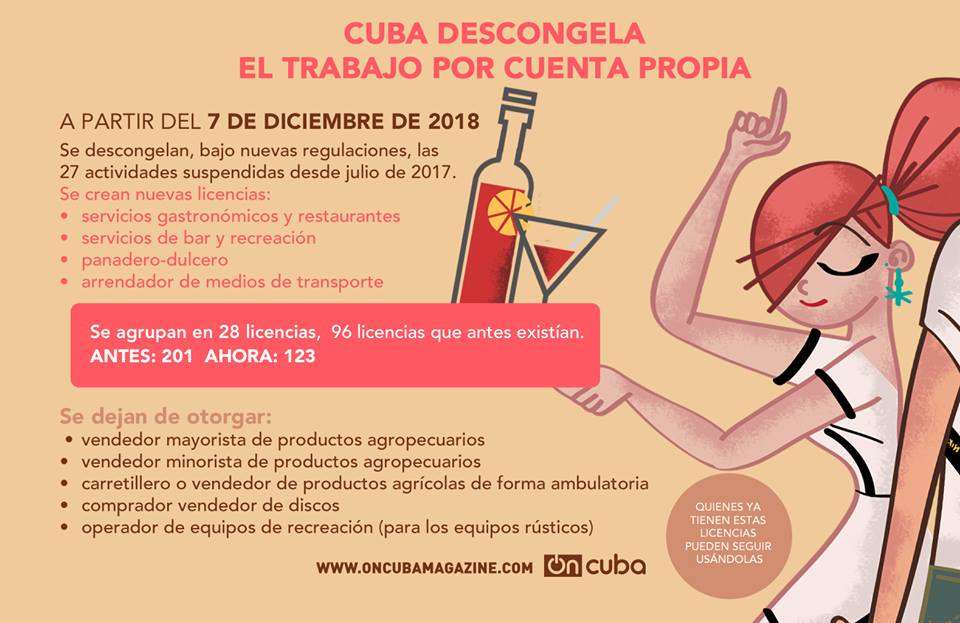 The 27 activities suspended since July 2017 are being unfrozen under new regulations.

New permits are being created:

They are grouped into 28 permits, 96 permits that previously existed.

Will stop being granted:

THOSE WHO ALREADY HAVE THESE PERMITS CAN CONTINUE USING THEM

Many of the changes highlighted by the authorities are simple updates in the face of phenomena that have been occurring naturally for years. That is the case of the merging of a group of permits for bars which in fact already existed.

In the same way, disperse elements in several regulations have been unified in a single document. Its transcendence is merely bureaucratic. Life goes by faster than the hand of the person who writes decree laws and resolutions.

Other elements were added in terms of infractions and sanctions. In general, the coercive instruments become harsher as the amount of fines and type of actions to be applied is increased. The use of figureheads to mask the true owners and the occurrence of criminal actions like drug trafficking, procurement and prostitution are recognized as violations. While this is a new element, in practice it had already been in the process of being confronted for a long time and these problems are behind some of the recently closed private businesses.

Unfortunately, the spirit of the new rules is the “no.” That word is repeated 243 times throughout the 129 pages. However, there is a “no” that will be necessary to see and that remains absent. It implies a change of philosophy. Instead of making a list of authorized activities, the need for a “no” is imposed pointing out what is forbidden and giving free rein to the creativity and the drive of the Cubans to resolve their economic problems and contribute to the country products, services and taxes. 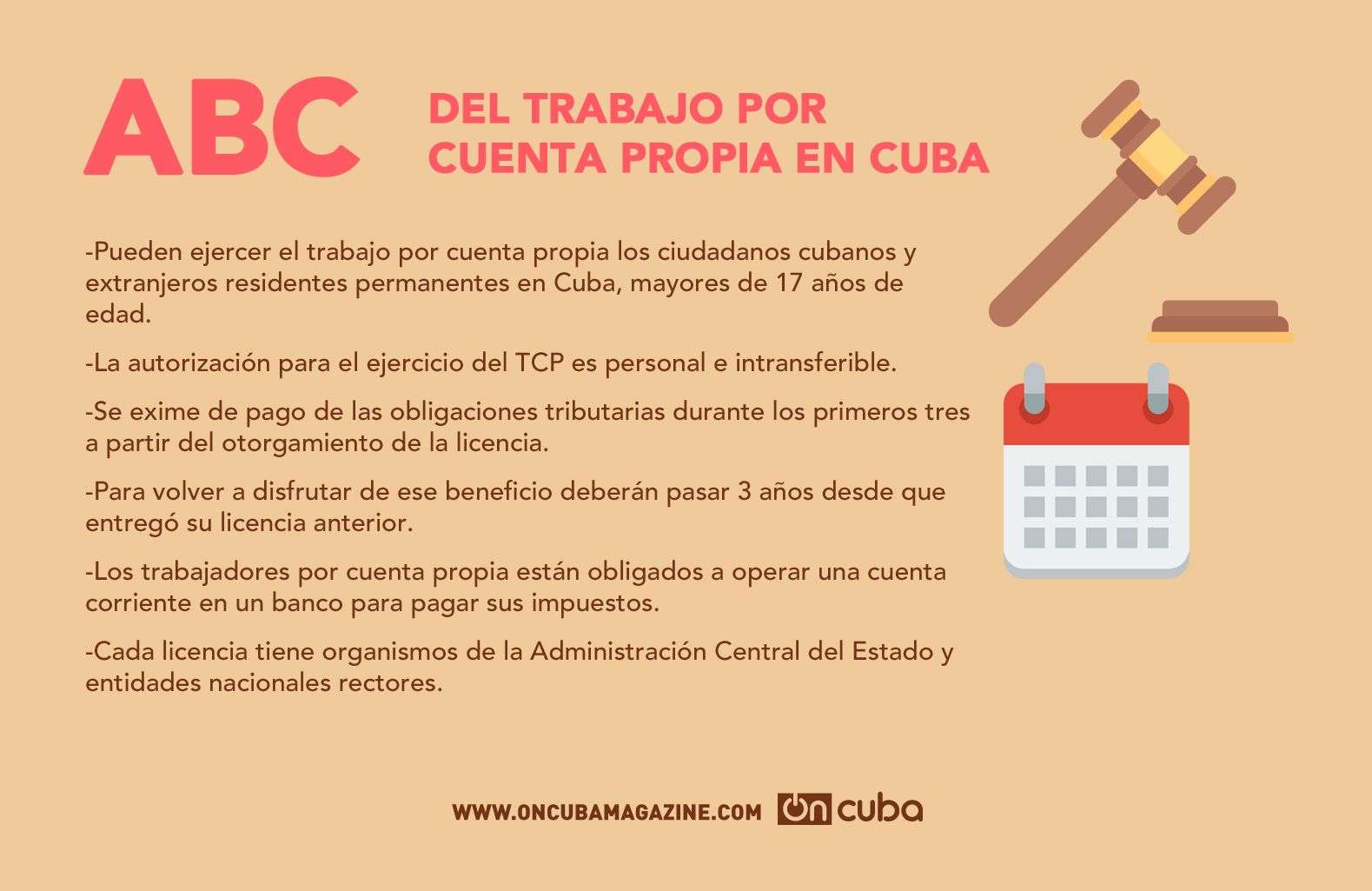 ABC OF SELF-EMPLOYMENT IN CUBA

-Cuban citizens and foreigners who are permanent residents in Cuba, older than 17, can carry out private work.

-The authorization for self-employment is personal and not transferable.

-Exemption of payment of taxes during the first three months after the granting of the permit.

-To again have that benefit three years must go by since handing over the previous permit.

-Private workers must operate a current account in a bank to pay their taxes.

-Each permit has governing agencies of the Central State Administration and national entities.

Among the most damaging and that will surely generate dissatisfactions is the prohibition to have more than one permit, as had been announced.

Deputy Minister of Labor and Social Security Marta Elena Feitó told the press: “There are workers who have a cafeteria and at the same time have a permit for manicurist or car washer, or producer-seller of footwear. That is not possible. In practice, it is an owner who has many businesses, and that is the essence and spirit of self-employment, which consists in workers carrying out every day their activity.”

Moreover, the authorities are trying to explain to us that there is no such damage because barely 1.7 percent of all the self-employed, a bit over 9,000, have more than one permit. How many workers have been hired by these 9,000 Cubans? How many families depend on those businesses that will now have to close? The number of those affected is evidently higher.

Behind this decision in particular there is no economic, fiscal argument, but rather a political one. It’s about the debated issue of the concentration of ownership.

An example is given of the impossibility of managing at the same time a “paladar” and a manicure business. And the one that has an ETECSA agent permit and also prints out documents? Why should he, his family and his clients be affected? This is one of the measures that will continue favoring illegal activities, since it will encourage the proliferation of the figureheads.

Another “no” that has been ignored by the media but that is clearly written in the new documents, is the specification about who can provide services to the private workers. The letter is clear and it is not recognized that a self-employed worker can have foreign enterprises, established or not in the country, as clients.

This type of relations also has been generating for a long time, especially with the computer programmers and designers, one of the few options so professionals can work as private workers. This unpardonable omission drives them toward illegality, distances them from paying taxes and healthily contribute to their personal and their country’s development.

Something that will create a lot of talk in the upcoming weeks is the coup de grace to the real estate agencies, the language schools, remedial academies, art and gym teachers. The owners of these businesses will be forbidden to hire workforce and will only be able to personally carry out these activities. 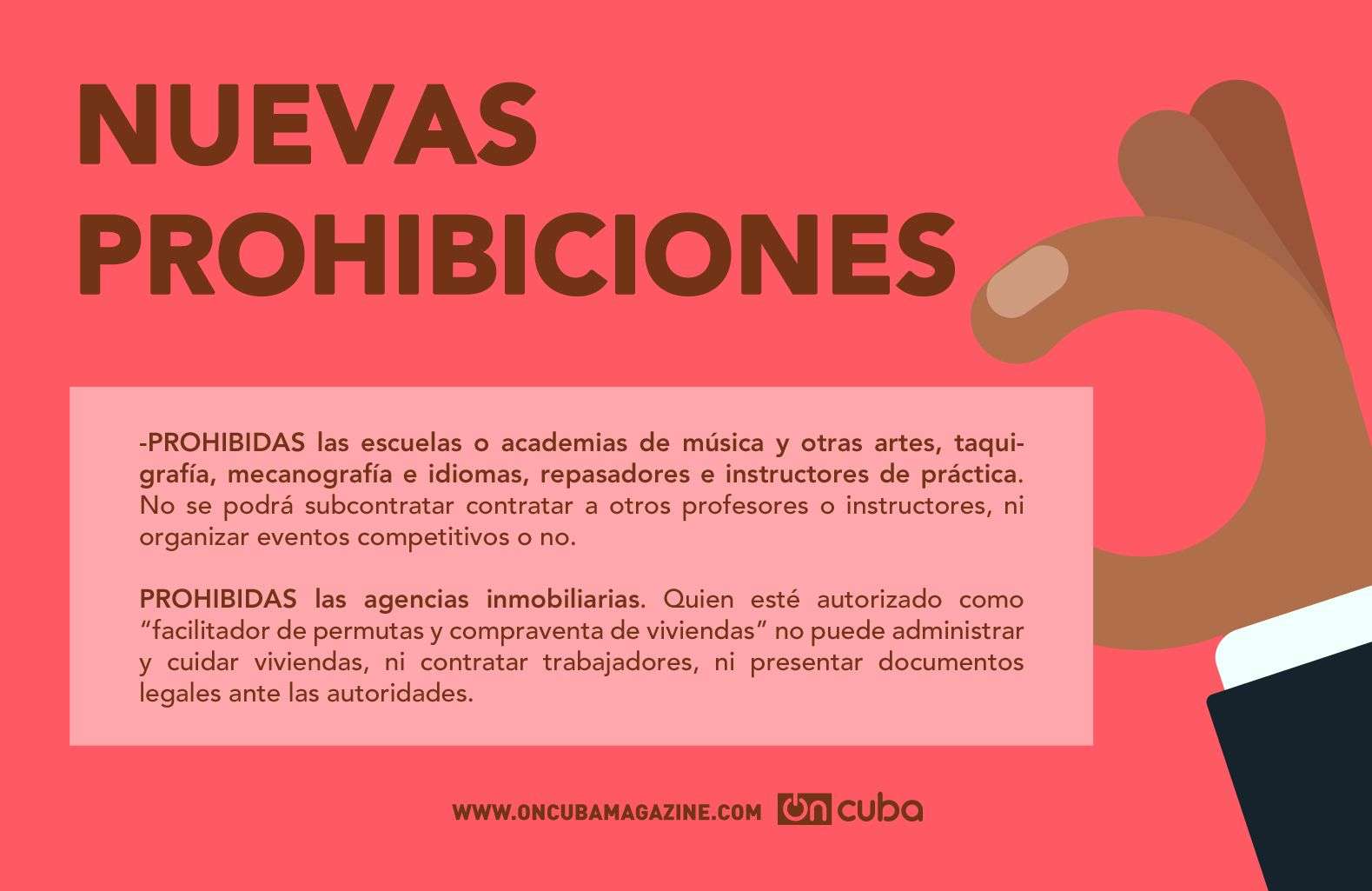 -real estate agencies are FORBIDDEN. Whoever is authorized as “facilitator of house swaps and buying and selling of homes” cannot manage or take care of the homes, or hire workers, or present legal documents before the authorities.

On the other hand, it is very concerning to see the retroactive character of this legal body: it will create difficulties for businesses that have been operating for years by virtue of previous legislations. The regulators will have up to 120 days to verify that the self-employed working in the 27 suspended activities have made the pertinent modifications in their businesses to comply with what has been established now.

Eliminating, for example, a cafeteria and a paladar coexisting in one same property to comply with the 50 authorized seats, will imply considerable economic damages for employers and employees.

We shall see the consequences of all this next December 7, when what was published in the Official Gazette comes into force. However, these unnecessary 11 months of waiting have had their toll:

– The emigration of young professionals has continued to increase. There were many who, discouraged by the abrupt stop, canceled their private projects and today live abroad.

– The pace for the creation of jobs and payment of taxes to the State budget slowed down, in an economic situation that entirely requires the contrary.

– Financial difficulties were generated for those who froze their savings and resources in an investment that has been unable to yield benefits in the expected term.

– Dissatisfaction grew among émigré Cubans who used resources for family businesses and friends, or repatriated to directly manage them.

– The credibility of the reforms undertaken by the government was affected and a sensation of uncertainty was created; very bad for the development of the private sector and for the attraction of foreign investment. 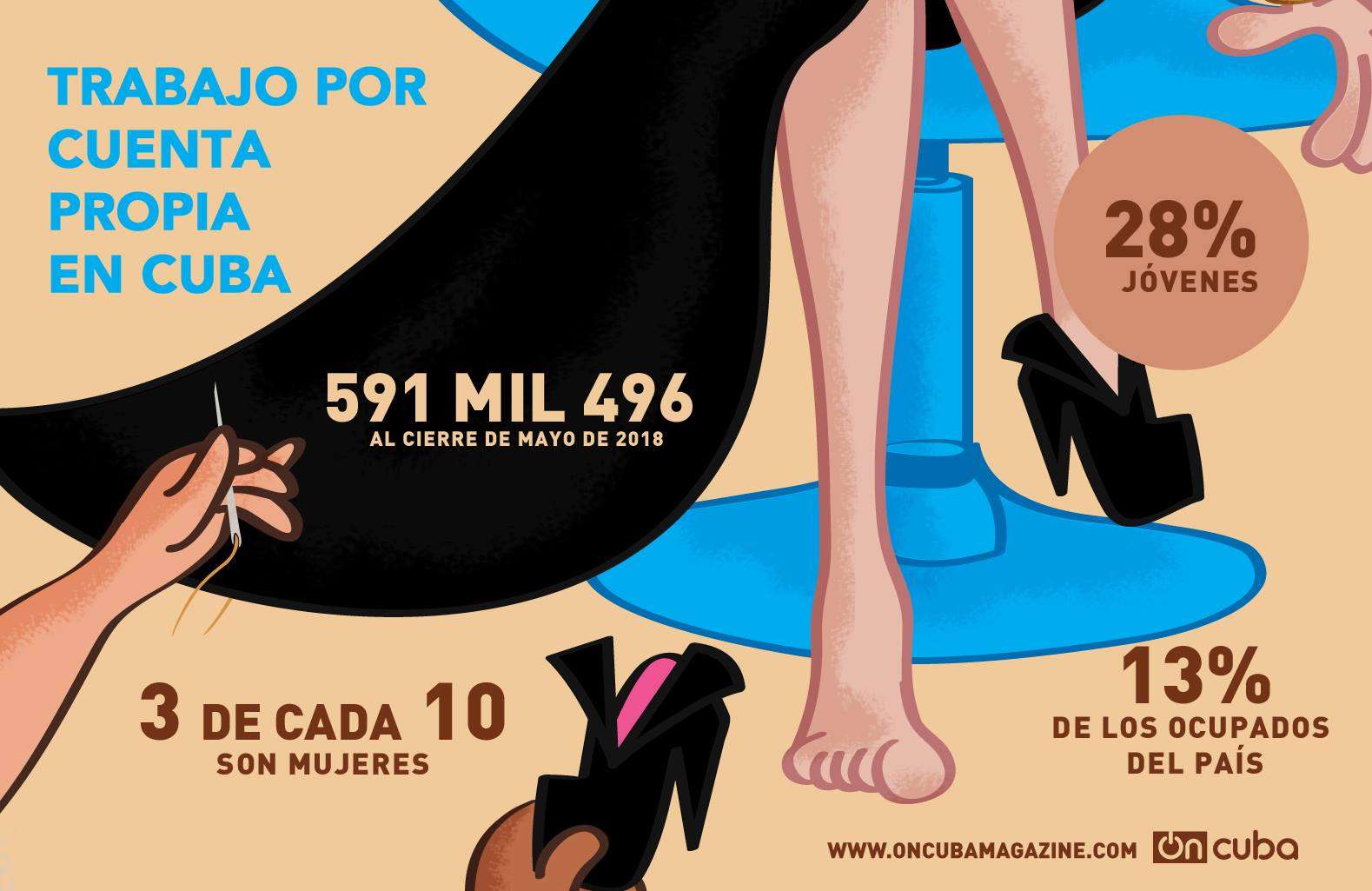 OF THE COUNTRY’S EMPLOYED

The approved regulations resemble more a program to restrict and repress the growth of the private sector than a policy directed at encouraging and incorporating it into Cuba’s economic priorities. These measures are a disappointment, because of the impact they will have on the private sector and the country as well as for what they should have and will not have.

There still remains an opportunity – I wish to believe – to be coherent and open the blessed bottle: we are at the threshold of the Constitution’s reform. Among so many things (some more important than these), the path will have to be cleared once and for all for the implementation of the small and medium private enterprise. Together with the state-run, cooperatives and self-employed, we should all step on the gas so we can advance in the race toward national prosperity, wellbeing and development.