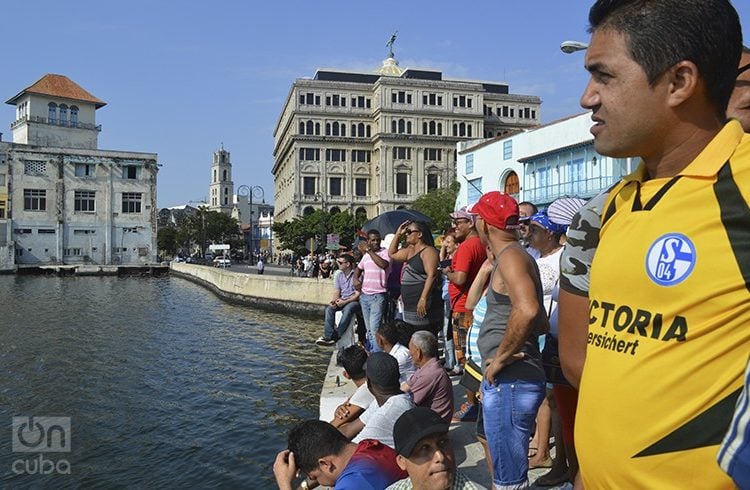 Eighty-six percent of a sample of U.S. travelers believes that their visit and business in Cuba benefit Cuban citizens. This was revealed by an opinion poll carried out by the company Public Opinion Strategies for Cuba Educational Travel, a provider of educational and people-to-people exchanges for U.S. people on the island.

The survey, carried out between March 6 and 15, included the opinion of 204 U.S. travelers who visited Cuba in recent months, with results having a less than 7 percent margin of error. 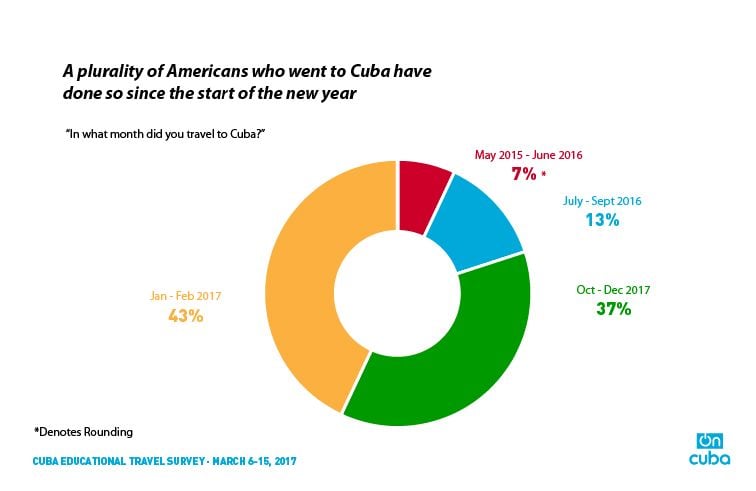 The persons polled, who traveled as part of the 12 categories authorized by their country’s government, said their activities on the island supported the development of the Cuban private sector. 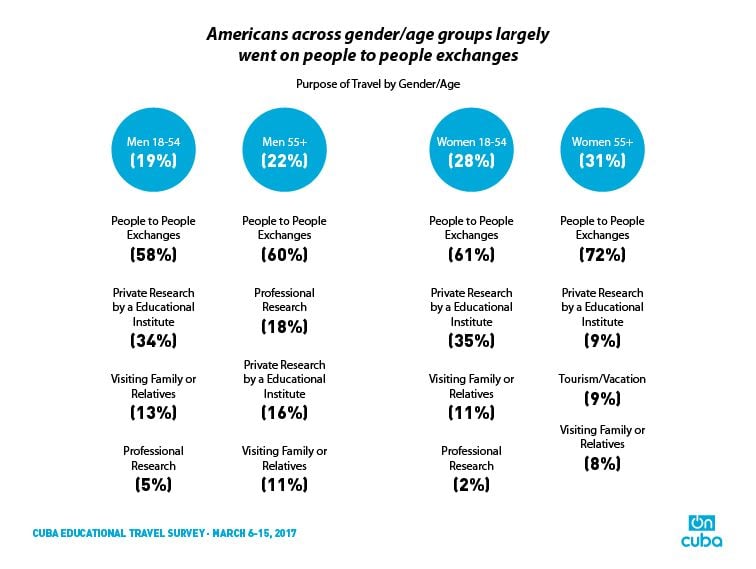 Seventy-six percent of the travelers said they had stayed in private homes at least during a part of their stay in Cuba, while 85 percent said they had hired private taxies and 86 bought crafts, records and works of art from independent vendors.

Moreover, 99 percent affirmed having consumed in private cafeterias, bars and restaurants, and a considerable number noticed differences that favored the private establishments over the state-run ones. 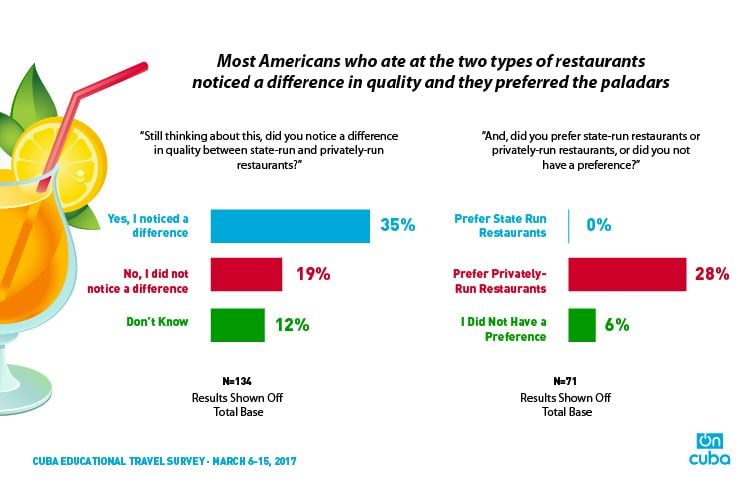 The polled affirmed also having given economic support to state workers and families, and having exchanged with the Cubans about different historic issues and current events. More than 80 percent of them entered a home on the island. 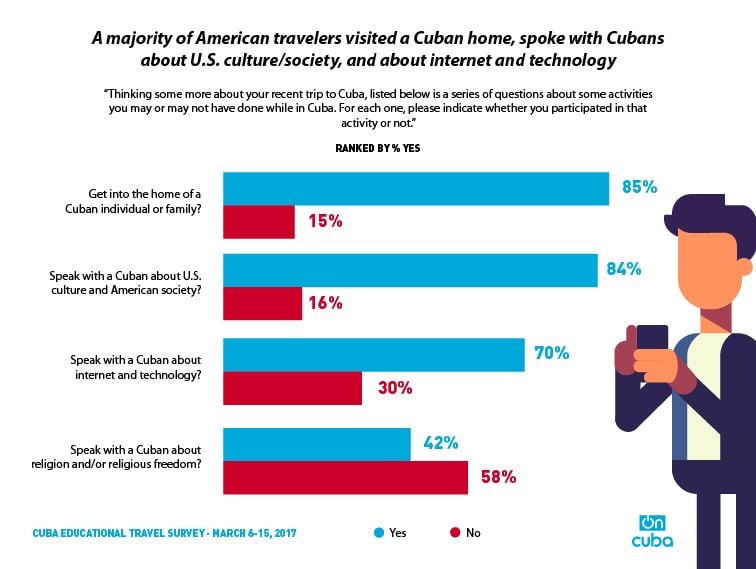 Eighty-two percent of the travelers tipped some of the employees of the state-run hotels where they were staying, while 49 percent made a monetary or material donation to a community program, to a family or to a Cuban in particular.

The dialogue between businesspeople and entrepreneurs was among the visitors’ interests, especially the younger ones. Eighty-two percent of the men and 79 percent of the women aged between 18 and 55 said they had participated in talks with representatives of the island’s private sector. The issues most dealt with were prices, supplies and other market elements, not so the investment opportunities. 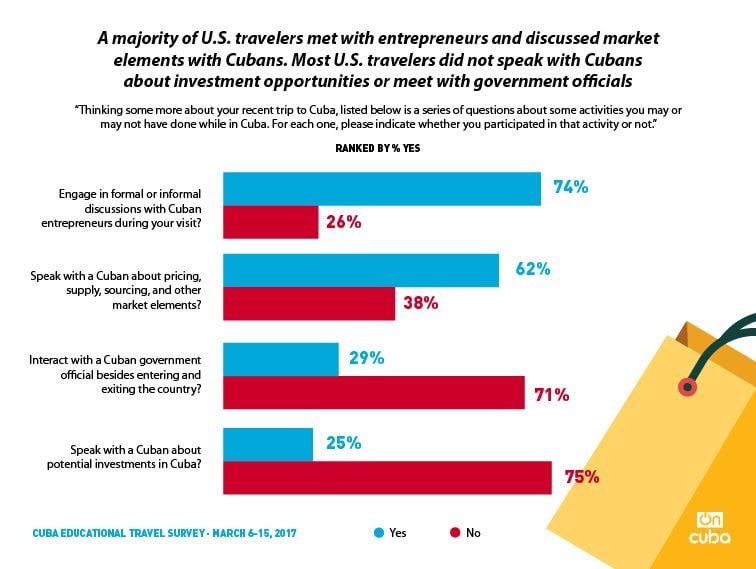 In terms of the Internet and technology, the younger people also stood out. 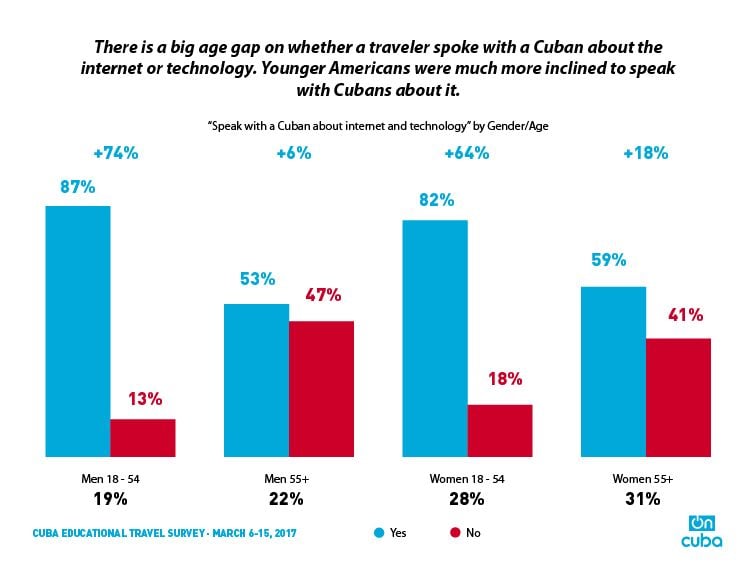 For Cuba Educational Travel the opinion poll’s results are clear: the U.S. visitors are directly exchanging with the Cubans, showing them their views about diverse issues and consuming the products and services being offered by the island’s growing private sector. That is why they consider that the Trump administration should maintain and expand the current policy with respect to U.S. citizens’ travel to Cuba.

The current scenario is marked by the uncertainty after White House spokesman Sean Spicer recognized in February that the U.S. policy toward Cuba is being “fully reviewed.” However, the U.S. people’s interest in traveling to the island has not decreased.

Another opinion poll by the Travel Leaders Group revealed that until mid-February close to 22 percent of their agencies focused on leisure trips had already made bookings for Cuba in 2017. The group, considered the travel leader in North America, affirmed at the time that more than 59 percent of the agencies confirmed their clients’ interest in visiting the island this year.

In an exchange with OnCuba, Collin Laverty, founder of Cuba Educational Travel, commented that “increased travel is helping to establish friendships and professional relationships between the people of the U.S. and Cuba, making it harder for ideology, rhetoric and sanctions to separate us. We look forward to the day we can do business as normal in Cuba with less red tape.”

Laverty is “hopeful that the broad support by the American people to engage with Cuba through travel, trade and investment will result in Congress acting to lift the travel ban.” However, he recognized, “We still have some work to do”

Despite the blockade’s legislative restrictions, more than 600,000 U.S. citizens and Cuban-Americans visited the island in 2016, thanks to the increase in air and cruise operations between the two countries. This year the number could exceed 700,000.

According to Cuba Educational Travel, the increase in trips not only provides benefits for Cuba but also for the U.S. economy. Their increase would favor the creation of new jobs and the expansion of the economy in the airline, cruise, accommodations, telecommunications and travel services industries, among others.

The travel agency’s projections are previewing a leap to the millions of visitors if the U.S. Congress were to lift the ban on free travel to the island.

FITCuba 2017, also with the United States