We are talking about the future of all Cuban families, those who profess a religious faith and those who do not, and in this sense it must be clear that the legislation is for the entire society in its diversity and multiplicity. 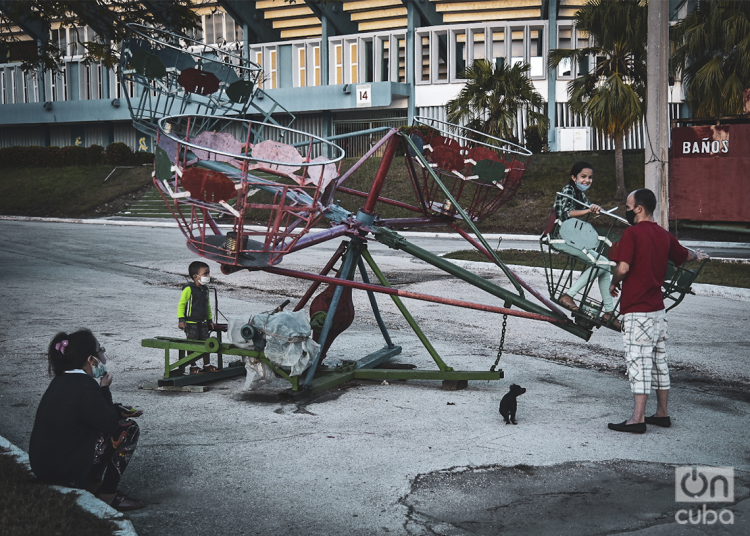 The new bill on Cuban families has many aspects for analysis. As part of this series of works with which the intention is to accompany the upcoming popular consultation process, we spoke with Loyet Ricardo García Broche, Master in Constitutional and Administrative Law, who works as a Theologian at the Martin Luther King, Jr. Memorial Center.

The Family Code has raised points of contradiction with some faith referents. Marriage, parental authority, progressive autonomy, are some of the most significant issues. This fact puts on the table for debate perspectives such as the secular nature of the State and the relationship between faith and politics. What are your considerations on these matters in the context of the popular consultation to which the aforementioned Code will be submitted?

It is a phenomenon that has been present in the Cuban social fabric for a long time, but whose most notable expressions began to be evidenced from the process of constitutional reform and more recently, regarding the creation of a new Family Code. Regardless of these two milestones in terms of legislative production, I would dare to affirm that we are witnessing a process that goes beyond a simple statement by some Christian denominations in the face of the creation of a legal regulation and, therefore, cannot be assumed as isolated and empirical actions.

The presence of a part of the Christian religious sector in the public space with a clear agenda and concrete demands, discerns signs of a reconfiguration of the system of relations of Cuban civil society. Concepts such as the secular character of the State, the right to freedom of worship and assembly, the relationship between faith and politics, as well as participation itself, must be studied from these manifestations that start to have a nuance of a diverse and plural Cuba.

In general, and, of course, in reference to the popular consultation and the future referendum on the Family Code, events that are currently attracting the most attention, an essential distinction must be made, and that is precisely that we are in the midst of a process of legal reform whose purpose is not to suppress rights already conquered, but quite the opposite, to demand rights not recognized until now by Cuban legislation in relation to different sectors of society. In this spirit, it must be clear that the regulations are universal in nature, they are designed to protect all citizens and that, at the same time, they are governed by the principles of equality and non-discrimination. In other words, the approach lies in the defense of the rights and the protection of those sectors of the population that are vulnerable and socially vulnerable.

Based on the foregoing, it seems essential to me to understand that the contents of the new Family Code are the result of a very serious, in-depth multidisciplinary scientific study, and with total adherence to the current reality, therefore, its analysis cannot be mediated by distortions that respond to interests that do not advocate the common good, love, affection and the full development of Cuban families.

I think that the popular debate is necessary because it reaffirms the democratic nature of the process that we are going to experience, in which all people will have the opportunity to express themselves freely and, of course, dissent will take place as a reliable expression of the debate because not all of us have to think in the same way; however, let us remember that we are talking about the future of all Cuban families, those who profess a religious faith and those who do not, and in this sense it must be clear that the legislation is for the entire society in its diversity and multiplicity.

These are times where other realities are blurred and new expressions emerge that respond to sectoral, collective, union and also personal interests, beyond the usual traditionally recognized official spaces. That is why it is necessary to understand that religious institutions also occupy an important place in this entire framework, that their presence in public space is a real fact and, therefore, these expressions and their relationship with the State also raise new readings and ways of understanding them. The point is that said presence must be premised on respect for government policies based on the good of the whole society, above religious beliefs or affiliations. We are not in the presence of a Family Code for the churches, but of a Cuban Family Code for all Cuban families.

At least four articles of the 2019 Constitution allow us to legally discern the relationship between faith, law and politics. Article 1, state with all and for the good of all, article 15, religious freedom and secular character of the State, article 54, conscientious objection. How would these constitutional precisions operate for the Consultation process and subsequent Referendum on the Code in question?

The starting point has to be, precisely, the Constitution itself. Its validity and empire since 2019 contributed to the Cuban socio-legal reality new directions in terms of legality, mandating the creation of a regulatory structural system at the height of its principles and current times. Regardless of this, the significant element is not exhausted in the same constitutional programmatic body, since it was the approving referendum with binding character that endowed said regulation with the supremacy that essentially characterizes it. In other words, the vast majority of the Cuban electoral population gave a “YES” to the new law of laws, which transcends the understanding of a simple act of manifestation of the will, since it is the superior order that would govern the life of all Cubans. This understanding places the constitutional text and its contents in an unswerving hierarchical order, by assuming its democratic and popular legitimacy as its foundation, without denying the entire process in general, but which in this case means the affirmative sanction of the citizenry. Therefore, the Constitution is the result of the desire of the Cuban people, a people that at the same time expresses a wide diversity in its composition and that is reflected in the same constitutional program.

A second element to take into account resides in the method that we assume when interpreting the constitutional postulates (also with regard to the Family Code), for which we must start from its organic nature and internal coherence. It is true that the Constitution regulates a network of complex relationships, but at the same time it builds it harmoniously and through a common denominator that is supported by the Cuban people and their happiness. It works as a system in which everything is perfectly connected, which recognizes rights and duties and establishes mechanisms for when these are violated, which is why our position cannot be based on establishing limits that contravene the highest aspirations of its purposes.

The three articles mentioned in the question have article 1 itself as axiological support, when at the end it establishes a why, in the face of a beginning that affirms a rule of law and social justice. It is not an empty declaration because it has a purpose, a State is postulated in which freedom, equity, equality, solidarity, well-being and individual and collective prosperity must be real. On assuming this declaration as an axiom, the relationship between faith, law and politics is woven through ties that do not place them in antagonistic positions, but rather, on the contrary, are aware of their complement, based, yes, on their essences and purposes.

The political dimension of faith and its voices in public spaces demonstrate the heterogeneity that can already be seen in the national context, just as religion becomes a sociopolitical expression with a role that crosses the walls of ecclesial institutions to access the public sphere. This does not limit the secular character of the Cuban State as it is postulated in article 15, but it does resignify the role of said institutions as an element of civil society.

Now then, what would be the limits between these postulates in relation to the process of Consultation and Referendum of the Family Code? It is evident that the rights are recognized for all and it is in this sense that participating in the debate process of the Code entails respect for the freedom to express any criteria, regardless of our religious belief and the position assumed before some of the contents of the regulation in question. That is a free and democratic exercise that, by the way, can also imply non-participation as one of its expressions, although it is not the one that I share.

The complexity lies in the demands that are placed and how these limit rights, stigmatize, discriminate against and exert violence on different groups and individuals in the name of a belief or expression of faith. As an individual option and, of course, also as an organized group, the possibility of being against is respected as a legitimate expression of the exercise of a right, however, as a constitutional mandate and government policy, decisions must respond to maxims of equality and rights above differences. This means that the secular nature of the State cannot emasculate the right to participation and expression of the religious sector, but it must make the State’s role as guarantor of the rights of all citizens absolutely clear, for which a Church-State separation in terms of public policies and the exercise of the guarantor functions that are institutionally recognized for the state apparatus is essential.

We are at the gates of a civic process in which all people have the right and should participate from their truth and as a sign of a true sovereign exercise, but always knowing that beyond individual positions, there is a more universal truth that is the people. in all its diversity of manifestations, which we could also call the great Cuban family.