We will be updating on the serious situation in Matanzas after several explosions at the Supertanker Base located in that city. 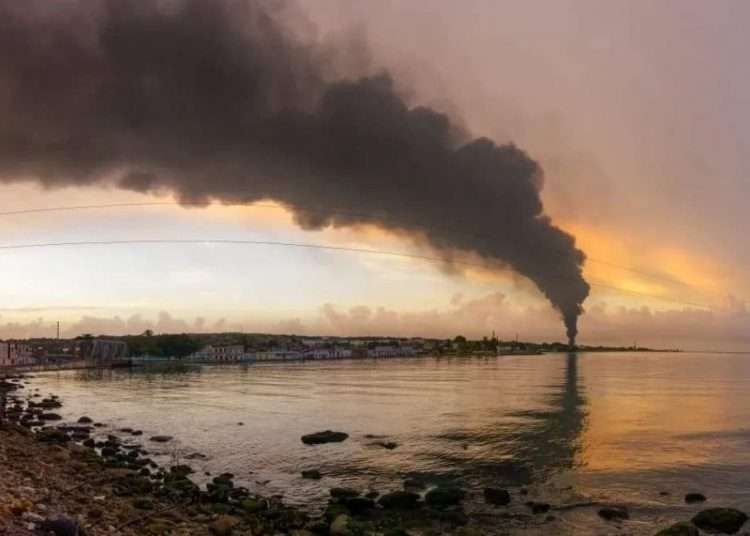 The column of smoke visible throughout the city, and already in some areas of other provinces, prevails from around 7:00 p.m. on Friday. Photo: Facebook profile of TV Yumurí.

A fire whose magnitude has not yet been calculated, according to local authorities, is shaking the Supertanker Base in the western city of Matanzas. The event, which keeps the entire nation in suspense, is affecting three national crude deposits.

The flames and an immense column of smoke prevail from around 7:00 p.m. this Friday. As notified by the Ministry of Energy and Mines, lightning generated by a severe storm hit crude oil storage tank 52.

The supertanker base has eight tanks and has a lightning rod system, but apparently the electrical discharge was higher and it was unable to withstand it, according to authorities from the Matanzas Territorial Division of Fuel Marketing.

At least 17 people are missing after the explosions that were confirmed in the early hours of the morning, as reported by the Presidency’s Twitter. The official account itself assured that these are firefighters who “were in the closest area trying to prevent the spread of the fire.”

The Cuban president, Miguel Díaz-Canel, directed that the search for the disappeared begin, a task that, at the moment, seems very difficult due to the high temperatures and the risk of new explosions in the place.

Given the complexity of the accident, the Cuban government requested help and advice from friendly countries with experience in oil issues, the Presidency announced.

Matanzas Supertanker Base, the fire

After a fourth explosion shortly after six in the morning in one of the three affected tanks at the Matanzas Supertanker Base, the provincial government of that western Cuban city warned this Saturday on its social networks that the fire that started yesterday does not seems unabated and it did not have accurate information on its magnitude either.

At the moment (August 6, 9:00 a.m.), the local authorities reported 58 injured, among whom were several journalists; ten of that total were in serious condition and three in critical condition, one with life-threatening conditions.

The care of the injured took place at the Faustino Pérez Hospital and at the Eliseo Noel Camaño Pediatric Hospital, which, due to its proximity, was enabled for emergencies. No deaths have been reported yet and there was already talk of Havana hospital institutions willing to take in the wounded, such as the Calixto García Hospital.

The situation is so difficult that the Dubrocq neighborhood, close to the incident, was being evacuated and the main figures of the Cuban government had gone to the area.

The president himself, Miguel Díaz-Canel, wrote on his Twitter account after visiting the site overnight that “there was no history of a fire of such magnitude at the Supertanker Base.” Meanwhile, residents of the place reported an increase in the thermal sensation and irritation in the eyes due to the smoke.

The provincial government shared an infrared satellite image on its networks where the place of the fire is represented by a black dot, which is possible in places of extreme temperatures such as those generated by forest fires, according to meteorologist Elier Pila Fariñas.

The column of smoke visible throughout the city, and already in some areas of other provinces, prevails since around 7:00 p.m. this Friday, due to a severe storm, as notified by the Ministry of Energy and Mines, when due to a severe storm a bolt of lightning hit crude oil storage tank 52.

Reporter Aliet Arzola, from OnCuba, who is in the vicinity of the scene of the events, pointed out that in the afternoon there were two severe storms and that, although the second one was shorter, it was also very intense and, apparently, was the cause of the event that triggered the fire.

A force of tanker trucks, dozens of ambulances and firefighters who came even from provinces such as Havana and Mayabeque had moved to the place; but, according to journalist Arnaldo Miraban of the local newspaper, Girón, the strong northeast wind that had been blowing since the afternoon was the cause of the flames going to other tanks, at least the second one containing large volumes of fuel as well. In general, there were already three deposits affected at the close of this first note.

A scene of infernal blazing flames had been captured at dawn, when the fire included two of the national crude oil storage tanks. According to a report by the Agencia Cubana de Noticias (ACN) news agency, the first tank that was impacted was at 50% of its filling capacity, which is 50,000 cubic meters.

The supertanker base – which has eight deposits – has a lightning rod system but apparently the discharge was higher than what it could protect, as explained by Rigel Rodríguez Cubells, director of the Matanzas Territorial Division of Fuel Marketing.

We will keep updating this news.