Despite the uncontrolled proliferation of this mollusk, the Cuban health authorities report no cases of infectious disease as a result of the germs transmitted by the African Snail. 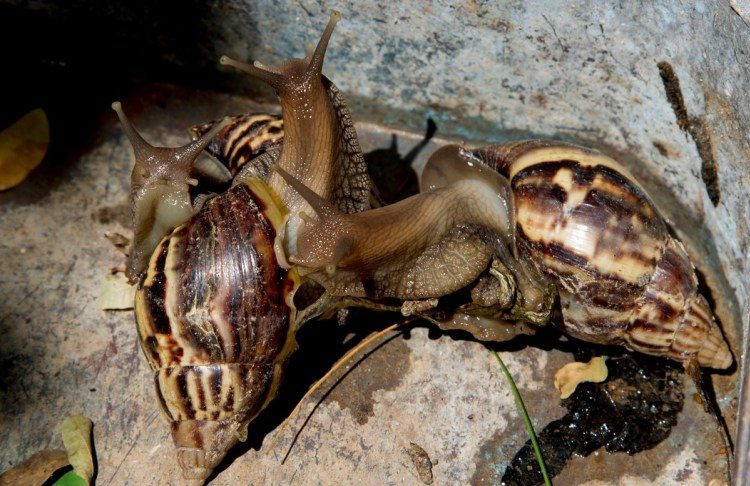 The Giant African Snail, one of the hundred most harmful invasive species in the world according to the International Union for the Conservation of Nature, has become a problem for Cuba. This threat to the island’s human and plant health and biodiversity continues to proliferate in twelve of the country’s provinces, favored by suitable climatic conditions.

The action protocols implemented by the National Civil Defense in coordination with the Ministry of Public Health and the Institute of Plant Health, similar to those that have been put into effect in other affected countries in the area, have been ineffective in controlling this vector that proliferates uncontrollably.

“Control is a burning issue, we are talking about one of the most harmful plagues in the world,” explains Luis Álvarez, curator of Malacology at the Felipe Poey Museum of the University of Havana.

In the areas adjacent to the Atunera 2 apartment blocks, located in the capital district of Cojímar, Habana del Este municipality, the African Snail swarms freely, creating an environment of extreme concern among residents of the area. They must carry out their daily lives avoiding the danger that direct contact with this mollusk implies.

“Windows have to be closed tightly, because it is a huge amount,” Nelia Acosta, a neighbor of the area, tells us, while another resident, Odalys Gómez, defines her abundance as “a herd.”

Neighborhood fears regarding the proliferation of this plague are not unfounded.

Communication campaigns have informed the population that the African Snail is a transmitting agent of lethal diseases for animal and human health. Álvarez reaffirms it emphatically through science: “It is the best vector that exists on the planet of Angiostrongylus cantonensis, a parasitic nematode that causes eosinophilic meningitis.”

This type of meningitis is more frequent in the pediatric patient, which is why the child population is especially at risk. “If there are cases of eosinophilic meningitis in Cuba, there is a 99.5 probability that the causal germ is Angiostrongylus cantonensis,” Alvarez adds.

Meanwhile, Dr. Liliana Senda, master in Infectology, points out that the African Snail can also be a reservoir of Gram negative germs such as Aeromona and also produce abdominal angioestrongilosis, a disease that affects the adult population.

“Persons should not come into contact with the snail, except for its consumption,” says Álvarez, who says that this reduces the risk of this vector for human health.

As part of the educational campaigns aimed at the population, the danger of direct contact with the animal has been indicated. “Through the media, Cubans have been explained that they should manipulate the animal with gloves and to eliminate it, a hole must be dug, it must be incinerated and it must be covered with lime,” says Senda.

However, despite the information issued by the Civil Defense and the Ministry of Public Health regarding how to deal with this plague, many feel that much more can be done. “You have to give more publicity to this so that people become aware and responsible,” says Eva Martínez, a neighbor from Atunera 2.

Others affected demand the presence in the localities of the organizations involved in the fight against this vector, as well as the resources necessary to eliminate this plague with individual effort.

“I think that a representation of plant health and public health should be present in the affected areas to give the neighbors more accurate information and also provide lime,” says Berta Téllez, one of the affected residents.

Despite the high degree of infestation due to the uncontrolled proliferation of this mollusk, Cuban health authorities report no cases of infectious disease as a result of the germs transmitted by the African Snail. “No specific harm has been proven by the Angiostrongylus,” says Alvarez.

This has been an element carefully investigated by the Pedro Kourí Institute of Tropical Medicine and Plant Health specialists, supported by the evidence that there are no reported cases related to the infestation by Angiostrongylus.

“To date, no mollusk that has been sent to the Pedro Kouri Institute has been infested with meningoencephalitis, stongylosis or Gram-negative bacteria,” says Senda.

Despite the relative peace of mind provided by the absence of reports on effects to human health, the spread of the African Snail is far from being controlled in Cuba.

Learning how to live in a responsible way with this dangerous plague and trying new strategies developed by the Civil Defense, seem to be the only viable options so that this serious problem doesn’t have greater consequences.