The Spanish-Cuban joint venture is reaching the quarter century consolidated as a world leader in the marketing of premium cigars, despite not being able to sell its products in the U.S. because of the embargo. 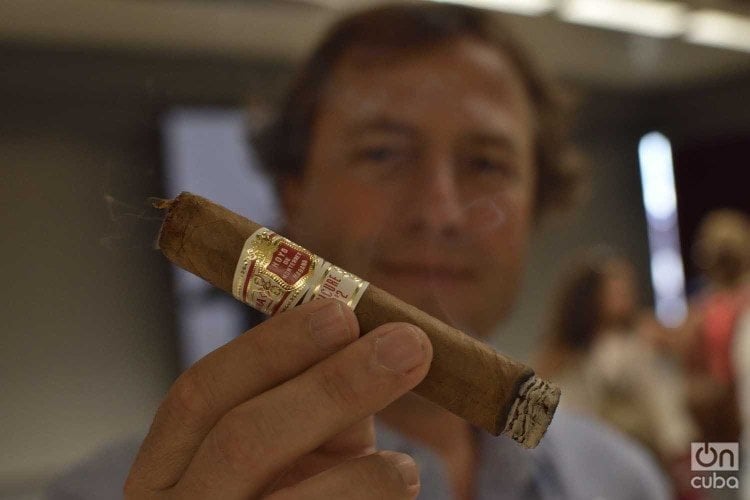 The Habanos S.A. company, which markets the famous Cuban cigars, is celebrating its 25 years of being founded with increased sales and “not worried” about a possible lawsuit against it under the Helms-Burton Act, fully activated by Donald Trump’s government.

The Spanish-Cuban joint venture is reaching the quarter century consolidated as a world leader in the marketing of premium cigars, company executives reported this Friday at a press conference held at the Meliá Cohiba Hotel in Havana.

Habanos capitalizes 70% in units and 80% in value of the international market, with the exception of the United States, where it cannot sell its products because of the embargo. Its commercial operations cover more than 160 countries and in 2018 it achieved a record revenue of 537 million dollars, a 7% increase over the previous year.

Ernesto González, the company’s Director of Marketing Operations, confirmed that the expectations point to continuing this growth in the current year and assured that its leadership rests in the pride of representing “an emblematic product of Cuba, symbol of its identity” and with a unique quality, recognized by premium cigar lovers throughout the world.

For his part, Vice President of Development José María López Inchaurbe highlighted the marketing work carried out in these 25 years, always under the maxim of “sell more and sell better” and with the use of renovating strategies and concepts, such as regional editions and high value products.

He also highlighted the creation of a specialized network with no global equivalent, dedicated to offering “the perfect cigar for the perfect moment,” which currently has 148 Habano houses, more than 1,000 specialists and more than 2,100 Habano Points worldwide.

On the possibility of accessing the U.S. market, the company’s co-president, Luis Sánchez Harguindey, said Habanos has been working in that direction for when the conditions arise. In addition, he regretted the decline of U.S. visitors to Cuba due to the Trump administration’s measures, but he minimized possible effects on sales for this reason on the island, a market that ranks fifth today for the company.

He also ruled out possible actions against the company as a result of the activation of Title III of the Helms-Burton Act, which allows U.S. citizens to sue companies that benefit from properties nationalized on the island after the triumph of the 1959 Revolution.

“We are aware of other foreign companies that are in Cuba and that have been subject to lawsuits, but in our case, no. The truth is that we are calm and don’t foresee any action against us,” Sánchez Harguindey told EFE news agency.

The executive explained that they have no record of possible lawsuits for any of the plantations―mainly in the area of ​​Vueltabajo, in Pinar del Río―where tobacco is harvested, nor of the real estate or land where the factories in which the famous Cuban cigars are made are located.

“We are focused on our business and unconcerned about an eventual situation with Title III,” said the Spanish executive.

Founded in 1994 to enhance the marketing of the worldwide-praised Cuban cigars, Habanos S.A. is celebrating its 25 years with stability in its traditional markets and growth in emerging markets.

In 2018 the first five markets of its renowned cigars were Spain, China, France, Germany and Cuba, while at the regional level Europe accounted for 53% of sales, above the Americas and Asia Pacific and Africa and the Middle East, where the rest of the quotas were distributed.