Just a year ago, the Cuban capital was all decked out to celebrate its half millennium. Now, when she has reached her 501 years, she’s fighting to at last leave COVID-19 behind. 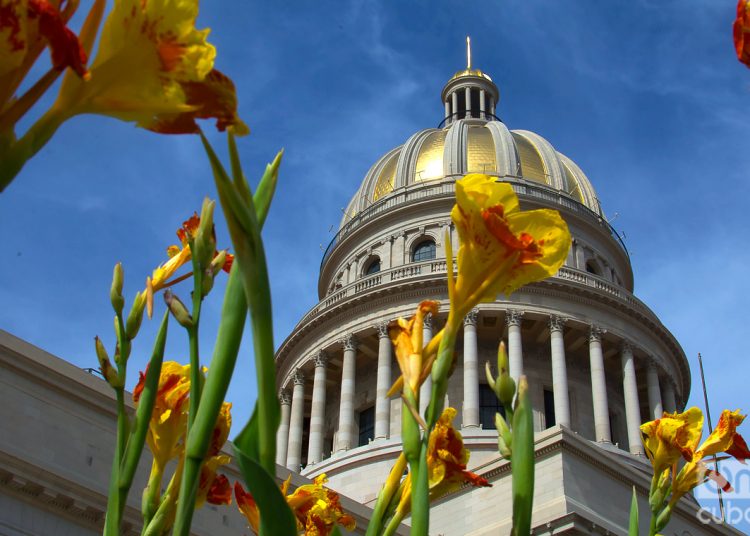 Gardens of the National Capitol, in Havana. Photo: Otmaro Rodríguez.

Just a year ago, Havana was all decked out to celebrate the half millennium of her founding. Those were long-awaited celebrations, conceived, enjoyed. Celebrations with a popular accent, with people overflowing the streets, and fairs, concerts, and fireworks, and also with solemn commemorations, official ceremonies and the visit of the King and Queen of Spain as a preamble.

The Cuban authorities said that the 500 years would not be a closure, but a beginning; that they would continue to work on how much still needed to be done, between the numerous works planned for the anniversary and the heavy debts that the city has dragged for years. And the people of Havana, accustomed to overcoming crises and hardships, to weather storms and broken promises, continued to celebrate the city’s birthday in that fine balance between optimism and distrust. That’s how they bid farewell to 2019.

But 2020 would break the mold. It would not be a tornado, nor a treacherous cyclone or another blow from the Trump administration―although there were also some―but a virus that had arrived from beyond the seas, the one that would tighten the rope as much as possible and would put the entire island, not just Havana, on red alert. The SARS-CoV-2 penetrated Cuba, as it has done all over the world, and with its lethal and silent invasion it changed the lives of the people and the country. For eight months now and still counting.

It would not take long for the capital to become the Cuban epicenter of the epidemic. Its social, demographic, constructive, geographical and cultural complexities―in the broadest sense of the word―would be an ideal breeding ground for the coronavirus, despite government measures to stop its spread―both local and those included in the strategy implemented throughout the country―and the sustained effort of doctors, scientists, authorities and the population in general.

COVID-19 spread its tentacles throughout the Havana geography. There were thousands of contagions―until this Sunday the number of infected in Havana exceeded 3,500, almost half of all the cases reported on the island―and killed dozens of Havanans, even though, thanks to the quality of the doctors and Cuban protocols, many lives have been able to be saved. It’s not a kid’s game.

In addition, the landscape and the rules of the game changed. It imposed the mask as a mandatory garment, social distancing as a necessary precaution―even when on lines and other spaces many risk violating it―, and frequent hand washing and other hygienic guidelines that can be the difference between being infected or staying healthy. It also forced the closure of schools and offices, the suspension of transportation and cultural events, the interruption of travel and tourism, pausing social life as we knew it until then, and staying home as a safer measure.

Throughout Cuba and, in particular, in Havana, schools had to be converted into isolation centers, blocks and communities had to be quarantined, doctors and students concentrated on the screening and care of the sick and suspects, and only the essentials for the economy had to function. Even in the hardest moments―during the outbreak that affected the capital last September―the epidemic forced the imposition of a curfew and closing the city tightly until the figures began to improve. And although today the official statistics show a different picture from months ago and other provinces now bear the sad condition of the epicenter of COVID-19, the disease is still lurking, attentive to the slightest oversight.

Today Havana is going through the recuperative stage, experiencing a new normality that has made children return to schools, buses to the streets, customers to shops, cafes and restaurants, and even regular flights to José Martí International Airport.

The pandemic, however, is not over, and therefore the celebrations for the 501 years of the capital are different. For this reason and also because in the midst of the shadows of the coronavirus the city lost its most illustrious son, its most consecrated historian, the man who did the most to rescue its stones and its memory, its new anniversary has been dedicated to him.

Loyal to Leal, to her beloved Eusebio, as defended by the communication campaign of the Office of the Historian of the City, Havana has again walked around the ceiba of the Templete and has once again dressed its best colors, in a break from its struggle against the pandemic. He has once again taken the white sheets to her balconies, she has opened her doors and windows to the sea breeze, and she has rekindled her utopias and sleepless nights.

And as the survivor that she is, the unbeatable and joyful and hopeful, she has once again prayed to all her deities for the future and for life, so that they can heal old wounds once and for all or, at least, not suffer from new ones, while she waits, with her hands ready and her feet on the ground, for the storm clouds of disease to at last disappear from the horizon.