The test should only be done by “those who are traveling to nations that require a negative COVID-19 certification to enter their territory,” according to official media. 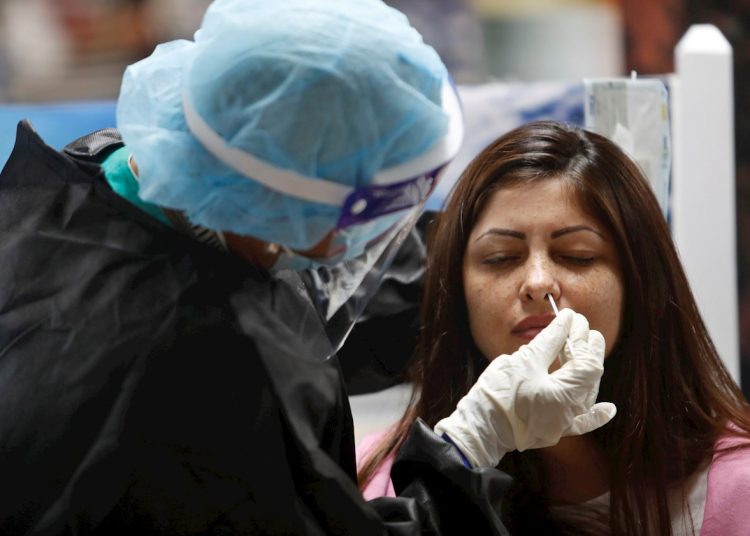 A health worker takes a sample for a PCR test, to detect the SARS CoV-2 coronavirus, at the Havana airport after the restart of its regular operations, suspended since last March due to the pandemic. Photo: Yander Zamora/EFE.

The PCR test to detect the SARS-CoV-2 coronavirus remains free of cost for Cuban travelers who plan to leave the island, according to Cuba’s official media.

The test should only be done by “those who are traveling to nations that require a negative COVID-19 certification to enter their territory,” according to a note published this Monday in Tribuna de La Habana.

This information contrasts with a previous report from the Holguín provincial radio station, in eastern Cuba, according to which this test would “cost 40 CUC, a service that can also be paid in national currency or in another currency authorized for this type of operation, which will be valued according to the current exchange rate.”

That report affirmed that “people who arrive to the national territory must undergo a PCR test once they return to their country, if the place they are going requires it,” while “Cuban people who wish to travel out of personal interest must (also) request this test.”

However, it did not make clear whether for Cubans this requirement was extended to all destinations or, as in the case of foreigners leaving the island, it should only be met if the trip is to countries that demand a PCR result for those who arriving.

Now, these doubts have been clarified by Dr. Carmelo Trujillo, head of the Department of International Health Control of the Epidemiology Department of the Ministry of Public Health, who explained to the press that taking the sample for the PCR from Cubans “is guaranteed in the provincial hygiene and epidemiology centers and in other designated health institutions” in each territory.

In addition, Trujillo pointed out that “in each province there is an assistance unit to which the traveler must go to collect the certification of the result, which is ready between 24 and 48 hours after the sample is taken.”

In the case of international travelers who also need a negative SARS-CoV-2 certification to re-enter their countries of origin or others, they “can have the test at the branches of the Cuban Medical Services marketing company in all the provinces.”

According to Tribuna de La Habana, in the capital, the Siboney International Clinic and the Pedro Kourí Institute (IPK) are the centers designated to test foreigners and nationals, respectively. The information advances that the Camilo Cienfuegos clinic will soon take over the processing of PCRs for Cubans, when it completes its epidemiological certification process by the IPK.

In the case of Holguín, the tests will be carried out “through the Miramar Optical Medical Services Branch or by the Guardalavaca International Clinic, located in the municipality of Banes,” according to the report from the provincial radio station.

This Sunday, the Cuban authorities also reported that as of December 1, the island will charge a health tax “to all people who arrive in the country” for “the International Health Control services performed by public health authorities at international airports, ports and marinas.”

This fee, which not only includes the PCR test, but also the rest of the health protocols used at the border, will cost 30 USD or its equivalent in any other freely convertible currency, and its cost “will already be included in the ticket,” according to Trujillo.