In a few days the documentary “La Habana de Fito” will begin its route through festivals and exhibition halls. Let’s wait, expectantly, for the meeting with Cubans, his natural audience. 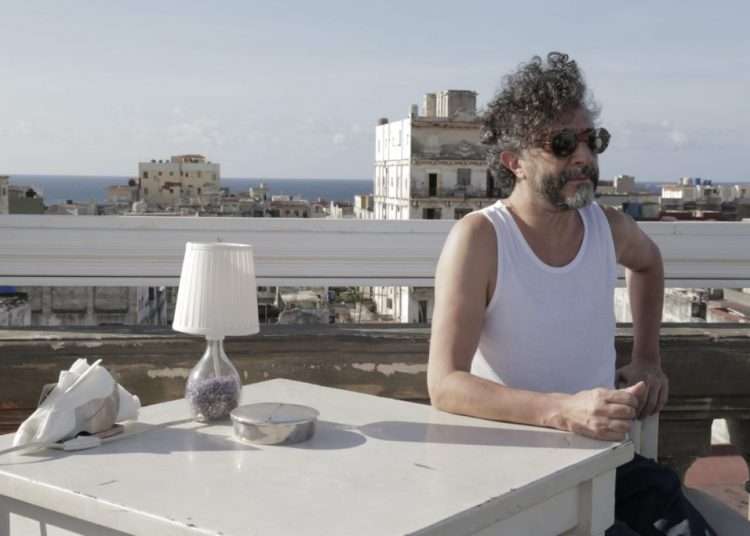 Fito Páez with Havana in the background. La Guarida Restaurant, 2022. (All photos were provided by the documentary producers)

It’s almost ready. Some color adjustments, the transfer to Digital Signal Processing (DSP) of the material and La Habana de Fito, a documentary by Cuban filmmaker Juan Pin Vilar, would be ready to be served to viewers in Cuba and the world. More than one hundred minutes of vibrant testimonies, interviews and archive images put into context the endearing relationship of Fito Páez, an essential figure of rock in Spanish, with the city and its intense and contradictory future.

In Havana Fito has sung, made friends, loved and has been a participant in the joys and sorrows of the common citizen, the one to whom he attributes a generosity and a capacity to rejoice that is disappointment-proof.

The film’s mainstay comprises several interviews with the Argentinian singer-songwriter, in Havana and Buenos Aires. He narrates how the threads of a reciprocal love between him and the capital of Cuba, a place where he has several generations of followers, were intertwined. Contributing to the story, and in what way, are the testimonies of Pablo Milanés, Cecilia Roth, Carlos Alfonso, Ele Valdés, Luis Alberto García and Wendy Guerra, among others; sometimes as exceptional witnesses — Cecilia was his partner on part of that tour — and others as mere spectators, young people who felt that Fito’s songs spoke directly to them.

Fito’s first — fleeting — contact with Havana occurred in April 1987, when he came to participate in the 6th Varadero Popular Music Festival. This edition of the event is remembered for the meeting of luminaries such as María Bethania, Chico Buarque, Gilberto Gil, Irakere, Harry Belafonte, Van Van, Silvio and Elena Burque, among others. But, above all, it is memorable for the debut of a very thin and gangly boy who sang, with his whole body, pieces of wild pain. On that occasion, we Cubans collided live with a rock in Spanish that was not epigonal or mimetic, but rather came charged with the recognition and assumption of being Latin American. Fito won the public’s heart and the public won Fito’s heart, which had been broken after a huge family tragedy.

The artist has spoken about the latter on several occasions, and in the documentary, once again, he expresses it. His trip to Cuba, at the invitation of Pablo Milanés, literally saved his life. A year earlier, an aunt and his grandmother had been murdered in the city of Rosario. Pablo, as he himself tells it, saw in the Argentinian’s euphoria, in his bright eyes, the mark of pain and offered him the only remedy within his reach: to sing, to remake himself, to perform the prodigy of turning his music into the expression of many. Without that opportunity for contact with the Cuban people, Fito acknowledges, he would not be the same.

Juan Pin Vilar set out to create a work that was not nostalgic. But he didn’t quite achieve it. You can’t ask Cuban Fito fans not to be assaulted again and again by the sweet sentiment. Impossible for those who were present at his concert in the Plaza de la Revolución in December 1993 (100,000 people, according  to the Spanish newspaper El País), not to shudder at the images. Well, it’s not just a matter of reviewing a moment, but of remembering who we were then, when we fell in love and sang “Cable a tierra,” “11 y 6,” “Ambar violeta,” “Giros”…. The same thing happens with those who were present in October 2014 (Leo Brouwer Music Festival) and in June 2016 (closing concert for the 30th anniversary of the Giros record) at the Karl Marx, where the singer from Rosario set fire to the nights.

“Habana,” the song that Fito dedicated to the city, had its world premiere in Lenin Park in May 1997, during a concert in solidarity with AIDS patients organized by Pablo Milanés, and which was also joinced by Joaquín Sabina. Precisely that very inspired piece is now heard in the documentary with a new arrangement, specially made for the occasion, in the voices of Pablo Milanés, Pancho Céspedes, Cimafunk and, of course, Fito. A gift of incalculable artistic value.

The project La Habana de Fito obtained one of the economic supports for its realization from the second edition of the Fund for the Promotion of Cuban Cinema. The script and direction were carried out by Juan Pin Vilar (Havana, 1963), who had the collaboration of Ricardo Figueredo and Josué García (production), Raúl Prado (photography), Marian Quintana (editing) and Velia Díaz de Villalvilla. (soundtrack).

Juan Pin has directed for Cuban television more than one hundred broadcasts in different genres, among them the fictional materials Una noche con Nora (1988), Los jugadores (1990), Feliz Cumpleaños (1997), El verdugo (2002) and El puente rojo (2013). He is also the author of the documentary Pablo Milanés (2015), not yet shown in Cuba.

In a few days La Habana de Fito will begin its route through festivals and exhibition halls. Let’s wait, expectantly, for the meeting with the Cubans, his natural audience.

The Argentinian has written and sung: “If we do not choose to live, I would like to die in Havana.”1 Long journey for this new work of national cinematography. Long live Fito; we still need his songs.

1 These, and the verses that make up the title of this note, belong to the song “Habana.”