A phrase is repeated and hammered, “for sale with everything inside.” Even “with the bottle of oil,” said one. 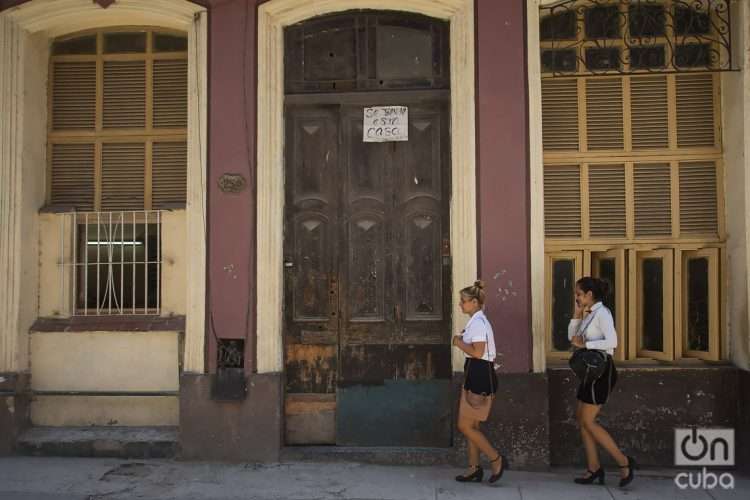 I have been relatively devoted to the real estate market in Cuba for some years.

My house, which was once the “house of many,” where grandparents, grandchildren, uncles and nephews lived together without being too crowded, gradually emptied and has become too big and lonely for my mother. That’s why, since I live outside of Cuba, we have evaluated several times the possibility of selling it and looking for something smaller for her, and some money that would also come in handy. However, the attempts I’ve made so far have not been too persistent.

I think I unconsciously harbored the hope that my distance would be temporary, and that the house would one day return to being the home it once was, for me, for my children and even for my future grandchildren. But today I see that possibility more and more distant.

That’s why I’ve begun to dive again into real estate sites and groups. And the panorama I have found is bleak.

After a first glance, it seems that the whole of Cuba is for sale. And despite the serious housing problem that has plagued the country for decades, the very attractive advertisements and more than reasonable prices — if we compare them with those of any other place —, few seem willing or able to buy.

Mansions to modest micro-brigade apartments can be found. From luxurious penthouses to timid rooms with built-in upper room. There are impeccable ones, remodeled in their smallest details, and a majority in which the seams of time and shortages are noticeable.

A phrase is repeated and hammered, “for sale with everything inside.” Even “with the bottle of oil,” said one. Many times they are sold with the furniture and appliances that cost so much to get. They are sold even with the memories, valuable to each one, but meaningless to someone else.

And in that phrase, “for sale with everything,” the reasons and the magnitude of the great collective tragedy are summarized, which is nothing more than the sum and multiplication of hundreds of thousands, perhaps millions, of individual tragedies. Of people who are willing to leave everything behind for a future that is often uncertain, but a future, nonetheless.

Above all, those who did not have that possibility in their plans surprise and hurt. Houses in which you can see that at their time they invested time, resources and love in them. Remodeled houses with more or less possibilities or tastes, houses where you can still guess the bustle of children or the peacefulness of a grandparent making coffee.

Some even with businesses included, sleeping their unprofitable sleep now. Houses for rent, cafeterias or restaurants that also miss better times.

Others are gradually showing signs of deterioration. Missing paint, a sack of cement or sand… and even hope.

Many belong to people who for a long time preferred to stay in Cuba, and created certain living conditions with a thousand sacrifices, and who now feel compelled to decide to leave.

I still want to believe that the family home may one day be the home it once was. It still moves me to remember what my youngest son said when he found out that I was thinking of selling it. That when he works and has “a lot of money,” he would buy it again. The thing is that his childhood, his life, and also part of mine is there. If I close my eyes, I can (we can) see the children running around with our dogs Princesa and Chaplin. There I can see my grandmother watering the rosebushes, and myself climbing the mango tree when I was 12 years old. I can remember loves and sufferings. I can see the dozens, maybe hundreds of gatherings of friends over the decades, including some beloved monsters of music or theater that once had that patio as a stage.…

Hopefully, the day will come, for all of us, when we want and above all we can, return to our house, our home, our island. Meanwhile, the “For Sale” sign continues to hang there.