This is the largest event of local transmission of coronavirus reported to date on the island. As a result of this, as of this Monday there were 57 positive cases, one deceased, and 148 contacts linked to the sick. 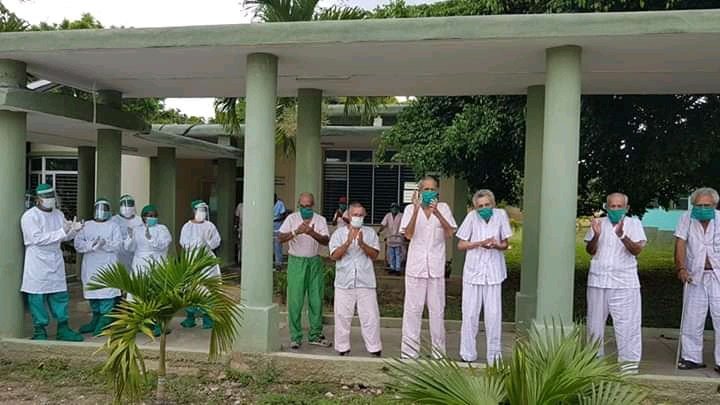 Isolated elderly people, along with part of the staff who attend them, in a school in the city of Santa Clara, in central Cuba, after registering an outbreak of coronavirus in the home where they were hospitalized. Photo: Dalia Reyes Perera/Facebook.

In the midst of the coronavirus pandemic, which already totals 1,137 positive cases and 38 deceased in Cuba, the news of an outbreak of the disease in a home for the elderly in the city of Santa Clara has kept Cubans concerned about older adults’ well-known vulnerabilities to COVID-19.

According to the health authorities, largest event of local transmission of coronavirus reported to date on the island. According to official data from this Monday, cited by Cubadebate, as a result of that outbreak, 57 positive cases were already recorded―44 elderly and 13 workers―, one deceased, and 148 contacts linked to the sick.

What happened there, in the opinion of Dr. Neil Reyes, director of hygiene and epidemiology in the province of Villa Clara, was the result of “a crack in the epidemiological safety” of the institution, which allowed the spread of the virus among those who live and work in it.

The causes of the infection are still under study, so there is no definitive conclusion, although the authorities hypothesize that “the contagion could have occurred after the entry and exit of the institution of asymptomatic workers and family members.”

According to Dr. Reyes, in the focus control it was found that “a doctor and a nurse who later tested positive for COVID-19 presented respiratory symptoms and still continued working.”

“Perhaps they did not believe that it was something serious or that they should not be absent and affect others, because it was resolved immediately, but the truth is that they failed to comply with the guidelines of staying at home in the face of any suspicion of illness,” said the official, who affirmed that “clarifying responsibilities and taking measures at all levels” is still pending.

This could be the point of origin of the outbreak, detected on April 12, when a patient admitted to the Arnaldo Milián Castro Provincial University Hospital tested positive for the coronavirus. After monitoring the patient’s contacts, new positive cases, mostly asymptomatic, started appearing in the home.

One week later, and after a rapid increase in cases, the infected elderly and workers were treated at the Manuel Piti Fajardo and Celestino Hernández hospitals in Santa Clara, where “they are receiving personalized attention, and most of them have a stable evolution,” the Agencia Cubana de Noticias (ACN) news agency noted this Tuesday.

According to the media, two patients are in intensive care, where “they are receiving extreme surveillance with the national protocol for these situations.”

Medical sources from hospital centers affirm that, along with the protocols established for COVID-19, and taking into account their vulnerability, the elderly “are also receiving treatment with monoclonal antibodies and other medications to prevent torpid changes and conditions typical of bedridden people, such as pneumonia, thromboembolism, and bedsores.”

So far, these medical sources assure, “the strategy is having good results” and none of the patients presents complications from these causes.

Sick elderly people also receive vitamins by injection and “a soft diet to facilitate ingestion” and which incorporates two proteins “to recover their nutritional status.”

For their part, another 79 of those interned in the home were negative in the diagnostic tests for the coronavirus and are currently isolated in the Marta Abreu special school, formerly intended for children with physical motor disabilities and which, according to the official press, has “optimal conditions to host them.” There they are cared for by doctors and nurses, as well as by social workers and support staff.

Meanwhile, according to Dr. Neil Reyes, the screenings and focus control continue “to reach the last patient linked to this event” and two people who had contact with workers at the institution were still confirmed as positive this Monday.

In the home, empty now, a “deep disinfection is now being carried out ranging from the green areas to each of the means used in the center”, to then perform “maintenance actions on some essential elements of the building,” according to Mileydis Paso, adviser for the elderly program in Santa Clara.

In addition, in the remaining 15 homes for the elderly in the territory, “extreme measures” are being taken to avoid infections with COVID-19. Among these, according to Cubadebate, there have been “the restriction of visits, the increase in screenings and the assessment of the personnel designated to work in such vulnerable places.”

In Cuba, the coronavirus already totals 40 deaths and 1,189 infections