The U.S. president declared a state of emergency for Puerto Rico. The Cuban Institute of Meteorology issued a tropical cyclone warning. 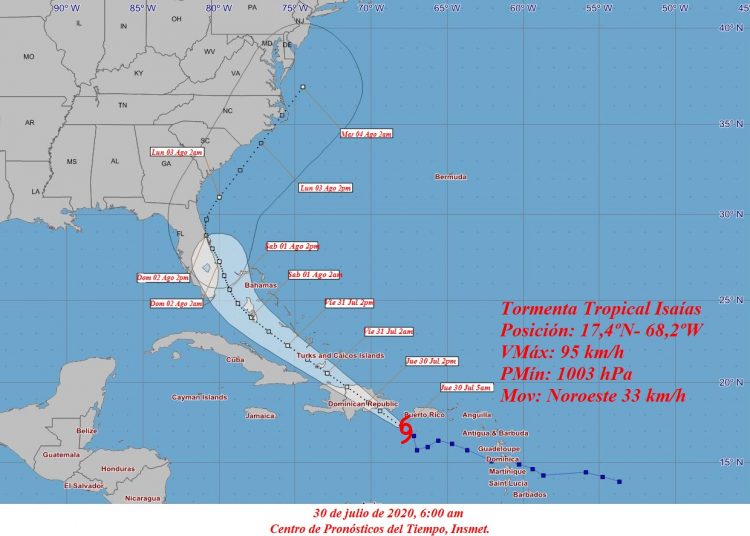 Image about the possible trajectory of Isaias, by Insmet.

On Wednesday night Tropical Storm Isaias formed in the south of the island of Puerto Rico, in the Atlantic, with maximum sustained winds of up to 85 kilometers per hour.

Meteorologists from the U.S. National Hurricane Center (NHC) project that it will pass over the island of Hispaniola this Thursday and that it will continue its trajectory to the south of the Bahamas on Friday morning.

The storm will lose strength as it crosses Hispaniola, but will strengthen again on Friday.

The Cuban Institute of Meteorology (Insmet) issued at six in the morning today the second Tropical Cyclone Warning, in which it warns that the system now has maximum sustained winds of 95 kilometers per hour, with faster gusts, and its central pressure is 1003 hectoPascal.

Isaias’ center was then estimated at 17.4 degrees North latitude and 68.2 degrees West longitude, a position that places it about 210 kilometers east southeast of Santo Domingo, Dominican Republic.

It is heading close to the northwest at 33 kilometers per hour.

Despite the fact that it would lose strength when crossing Hispaniola, meteorologists warn that the organism will begin to reorganize when it goes out to sea in northern Haiti and the Dominican Republic in the early morning.

As a consequence, there will be a gradual increase in rainfall over the eastern region of Cuba, which will later extend to the center of the national territory.

As of Thursday night there will be strong swells with light coastal flooding in low areas of the northeastern coast, mainly on the north coast of Guantánamo.

The NHC has activated a tropical storm alert for Puerto Rico, the Dominican Republic, part of Haiti, the Virgin Islands, southern and central Bahamas, as well as for several islands that are Dutch, French and British colonies.

U.S. President Donald Trump declared a state of emergency for Puerto Rico this Wednesday, authorizing the use of federal funds to face and alleviate the effects of the storm on the island.

The next tropical cyclone warning about this organism will be issued by Cuba at noon today.

With information from EFE and Insmet.

Coronavirus in Cuba: more than 3,600 tests, 11 were positive