At the plant, located at Havana’s Center for Genetic Engineering and Biotechnology, the active pharmaceutical ingredient of the drug Jusvinza will be produced, successfully used in the treatment of seriously and critically ill patients with the disease caused by the SARS-CoV-2 coronavirus. 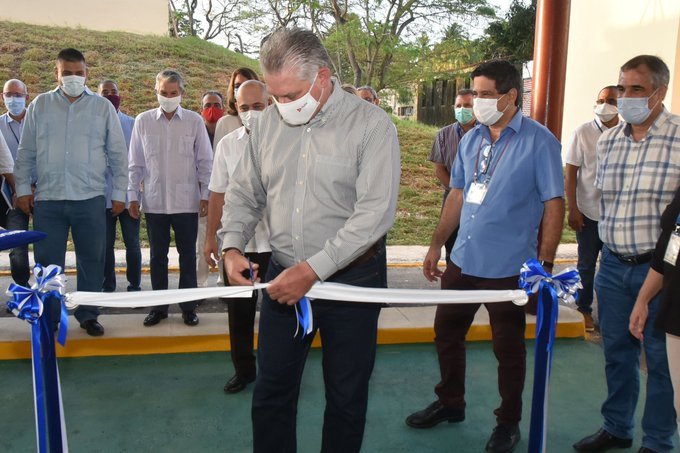 A synthetic peptides production plant, in which a drug used successfully in Cuba against COVID-19 will be manufactured, was inaugurated this Thursday at Havana’s Center for Genetic Engineering and Biotechnology (CIGB). President Miguel Díaz-Canel opened the plant.

At the plant, identified with number 14 in the CIGB, the active pharmaceutical ingredient of the drug Jusvinza will be produced, used in the treatment of seriously and critically ill patients with the disease caused by the SARS-CoV-2 coronavirus, said the official Cubadebate website, which quotes the portal of the island’s presidency.

The installed capacity for this stage, according to the source, meets the national demand for the drug, formerly known as CIGB-258, and, in addition, can produce other drugs for the treatment of oncological and autoimmune diseases such as rheumatoid arthritis.

In this way, the new facility joins the production complex of one of the main scientific centers in Cuba, and expands its possibilities to produce medicines using chemical synthesis technology at an industrial level, Cubadebate affirmed.

The biotechnology industry has vast experience and proven quality in Cuba, which has earned it the recognition of the international scientific community. Its role has been fundamental in confronting COVID-19 on the island, as several of its products, including Jusvinza, recombinant interferon alfa 2b and Itolizumab, have demonstrated their effectiveness as part of the Cuban medical protocol against the disease.

Coronavirus in Cuba: more than 3,600 tests, 11 were positive