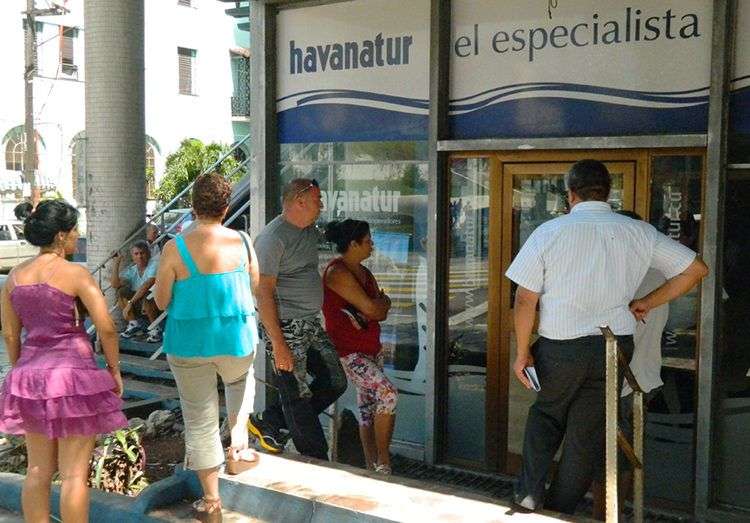 Since last July Cubans that have 3000 CUC can enjoy sightseeing in Europe. Although the news has not caused too much commotion among the population perhaps because that option is still a pipe dream for the vast majority it is certain that the initiative of the International Group of Tour Operators and Travel Agencies Havanatur SA is an innovative approach in the Cuban tourist sector.

In collaboration with the airline Blue Panorama and Blue Vacations travel agency, this project aims to provide a product that allows the travel of Cubans abroad as tourists, and then “sell the destination Cuba in countries like Chile, Argentina, Mexico, and continue to Europe, keeping the island in the middle of those combinations, “says Esther Góngora, Head of Group Multidestinos, Airlines & Travel Havanatur SA

With the support of an airline Blue Panorama that operates Italy, and the arrangement of Blue Vacations to ensure all arrangements on Italian soil, Havanatur specialists designed the product and released three promotional packages: Best of Italy, which includes a tour of Milan, Venice, Florence and Rome; Traveling through Europe, including Milan, Rome, Paris and Amsterdam (one call); and finally, Rome, Eternal City, which focuses its activities in the Italian capital.

Unlike other Multidestinos Havanatur packages, this proposal was unique in that it involved the Italian Embassy. Blue Panorama and Blue Vacations reconciled with this office so people can obtain a Schengen visa and thus stimulate the promotion of the offer.

Cash in one hand and papers in order, the first six Cubans to buy the tour got their visa a week later and took off for Milan last July 14 for 9 days and 8 nights to know the best of Italy.

“I think that’s the most complete of all because, Gongora explains, because you go to Milan-Florence-Venice-Rome, and in the latter spend four nights, including a visit to the Vatican, which is already reserved in advance by the agency. In every city there are Spanish speaking guides, plus a staff of Blue Vacations guiding passengers during their stay.

“The offer also includes transfers by fast trains, 30 minute gondola ride in Venice, and breakfast accommodation in three star hotels. However, one should take on average 400 Euros in cash to cover food and pay hotel taxes. ”

For a more complete experience, OnCuba also spoke with Livan Hernandez, a fourth year of Automatic Engineering at the CUJAE who traveled in that first group of six passengers thanks to a birthday gift from his parents, funded in turn by friends of the family residing in Italy.

“What I most enjoyed the trip incredibly was not part of the tour provided by the agency,” says Livan: “The hotel where we stayed in Venice included a very cheap tour of the Murano and Burano islands, where we saw up close the manufacturing process of glass and visited the Museum of Glass. I was also very impressed by the Sistine Chapel and the Duomo cathedral of Milan “.

Among the negative aspects Livan highlights the absence of the guides promised in the package, who, as he heard say, work only with groups of more than 15 visitors. Furthermore, “the entrance to museums was not included in the offer and can cost between 5 and 15 Euros, and if you take into account the daily spending on lunch and dinner, I think it takes a lot more than 400 Euros for a stay without concerns, “he explains.

Also, the opportunity to travel on a tourist visa added a risk factor to the offer, generated by the possibility of taking it as a migratory vehicle. But reality proved otherwise: so far about 250 Cubans have traveled to Italy in this way and all have returned.

“For that we require throughout the sales network they will always explain to clients who have intentions to spend 2495 CUC to stay in Italy, you are wasting your money, because as soon as it is discovered will be repatriated and will lose any right to enter European community for a period of 10 years. You will then be circulated to all embassies and immigration departments on the island, so that no one will be granted a visa to leave the country, “says Góngora.

After eight uninterrupted flight departures from July 14 to August 20, currently there are only tickets for packages on September 15, October 13 and November17, when the first stage of the project concludes.

“After then come the end of the year offers special features and we are also studying other destinations such as Russia, where the process would be simpler by not requiring a visa, and Germany, but we are still evaluating the prices and agreement with airlines fly direct to these countries as Aeroflot and Condor “.