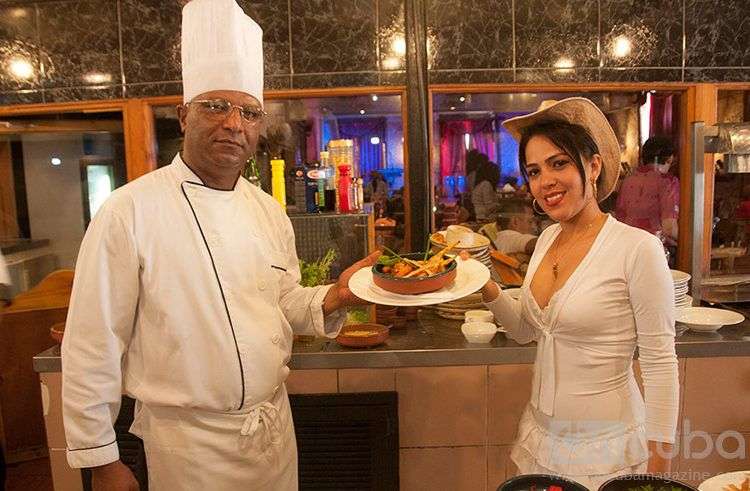 The Spanish word ‘guajiro’ comes from the English pronunciation of war hero, as Americans called the rebels from the Spanish-Cuban-American War, or so some claim. Actually the word comes from the language of the South American aborigines and means ¨great, or powerful, lord¨. Guajiros, men from the countryside, is the result of a blending of the Spanish and African roots. It gave way to the typical Cuban farmer, whose culture is reflected in its traditions, architecture, music and food.

Right in the middle of Havana, El Guajirito Group offers visitors a watercolor of options to enjoy that culture and its traditional food, which does not scorn the exquisite Italian or international cuisine. No one could ever imagine that a building in Zulueta No. 658, between Gloria and Apocada streets, sheltered a giant –traditional and modern– hut.

If you ever walk by its front door and two guajiros wearing guayaberas invite you to go up, don’t hesitate in going in El Guajirito, a project with added value to its gastronomic service of Cuban, Italian and international cuisine. Artistica Gallega and Concepcion Arena l societies have hosted it since the 90’s.

Inner decorations focus on stones, wood and leather. The handcrafted furniture is made up of stools, tree benches serving as wine cellars, lights resembling cart wheels, saddles and boots are mixed with the latest culinary trends in the world. A panoramic kitchen in the Tablao de Pancho, the first of its restaurants, offers a show where visitors can observe chefs preparing pizzas or fresh pasta, shellfish or any of the dishes on the menu.

In the second hall, El Guajirito, the other restaurant of the Group, invites customers to taste an appetizer on the house in the shape of a hat made from palm tree leaves, with a wing full of different kind of bread with garlic, which is one of the specialties of the chef. But that’s just the start.

Bartenders and clerks –all of them women dressed like modern guajiras– suggest the main drink: Guajirito cocktail, a refreshing drink made with sugar cane juice, pineapple juice, lemon, rum and ice; guarapo, an exquisite sweet beverage made manually with a traditional sugar cane grinding mill. The other juices are also prepared naturally from season fruits.

Guajirito main courses are tempting, they range from paella and pizza to lamb, prepared with ingredients plenty in vegetables which favor a mixture of smells and tastes with the finishing touches of Cuban cuisine. There is nothing like homemade desserts that vary from jam and cheese to patisserie. A variety of colors and recipes they sometimes share with their followers in Facebook under Grupo El Guajirito.

A painter works there and makes more enjoyable the Legendarios hall, while clients can order a cup of Cubita coffee, grinded on the spot and prepared by a knowledgeable staff. They have an offer that includes dinner and an exclusive show with figures from the Buena Vista Social Club and from the Afro-Cuban All Stars, joined by musicians from Sierra Maestra and Caña Santa bands. The show is part of the Legendarios del Guajirito Project, which also performs on Tuesday and Fridays at the Central Park Hotel, the best city hotel in Cuba, according to TripAdvisor.

“Even an Eskimo would know the Buena Vista Social Club”, said Lazaro Villa, one of the founders of the place, who assured to supplement the services offered with the most authentic traditional Cuban music renowned internationally. It is all combined in a dynamic show that makes visitors stand up and dance with the songs by Cuban artists.

La Guantanamera song, almost a second national hymn, waves customers good bye in a small hall with glass walls that allow watching the show offered for visitors during the evenings or provide the necessary privacy in the afternoons for business talks. It is the Habano Hall, an exclusive service for cigar smokers which offers the 27 varieties Cuban cigars, exceptional humidors, magazines and coffee bags. Young boys wearing guayaberas await customers to start the Habano ritual, an experience that is increasing gaining more followers. Clients can use smoking areas, walk around the latest bibliography on cigars and have a typical guajiro adventure.

If at the end of the journey through this culture customers have no place to stay or want to continue enjoying a genuine experience, there will always be a cab available to take them to Guanabo Guesthouse, an extension of El Guajirito Group by the beach. Sophistication and comfort in its five air-conditioned rooms are an invitation to rest. They include Jacuzzi or bathtubs, rustic furniture, cable television, telephone and a mini bar, among other services. The beds have been decorated in the style of farmers as they are made in wood and bamboo. Besides, customers can enjoy a guajiro wake up by the sea.

Walking into the building at Zulueta No. 658 is the best way to get to know in Havana the essence of guajiro culture in Cuba. The secret is not to detour till reaching the facilities of El Guajirito Group. As reads one of the songs by Legendarios, the heirs of the music from the Buena Vista Social Club: “Hey, compay! Don’t leave the road to go for the sidewalk”.