The ceremony for its announcement took place at dawn this January 1 at the headquarters of the Yoruba Cultural Association of Cuba, located in Havana’s Prado Promenade. 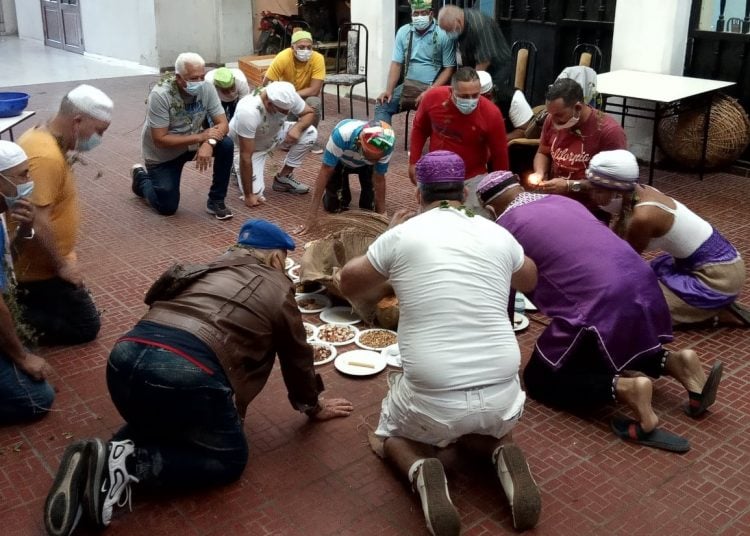 Detail of photo taken from: facebook.com/asyorubacuba

Olokun, one of the most respected and mysterious deities of the Yoruba pantheon, will be the ruling figure of 2021 while the accompanying orisha is Ochún, according to the traditional and increasingly well-known Letter of the Year.

The ceremony for its announcement took place at dawn this January 1, as reported by the  Yoruba Cultural Association of Cuba on its Facebook page.

According to the prediction, for the coming twelve months, the prophetic prayer will be “A good health on earth that Orunla provides,” while some of the sayings under this sign are “He who laughs last laughs better” and “Sometimes what you don’t like is what you have to do.”

The ruling sign will be Ika fun and its two witnesses correspond to Odi leke and Irete ogbe. Also, this year’s flag is blue with yellow trim.

Among the forecasts, it emphasizes that there will be an increase in contagious, gastrointestinal and nervous system diseases.

It also emphasizes events of social interest such as “increased contempt for authority,” “breaches of agreements” or “increased loss of human life as a result of illegal immigration.”

Faced with these omens, it recommends that world society carry out “an analysis of the high level of corruption existing in all spheres,” that the family “instill respect, education and love for work,” as well as periodically checking health and avoiding narcissism in a general sense.

According to the Cubayoruba page, Olokun is related to the deep secrets of life and death, provides health, prosperity and material evolution and represents the orisha of the ocean in its most terrifying state. It has the ability to transform and is fierce when enraged.

Tradition tells that Obbatalá chained him to the bottom of the Ocean, when he tried to kill humanity with the flood. He is always represented with a mask, says the aforementioned page.

Meanwhile, the ceremony where the Letter of the Year is given, for which practitioners devoted to the cult of Ifá gather, is one of the most deeply-rooted traditions for believers.

In it, and according to the information provided by the Yoruba Cultural Association of Cuba, the actions and preparations began on December 1, through the formation of working groups made up of the Council of Major Priests of Ifá, the Council of Advisory Priests to the major priests, the Priests, heads of families of the four branches of the Afro-Cuban legacy, as well as the provincial priests.

This ceremony was presided over by Miguel Febles (Bebo) Padrón, major priest of Cuba.

The Letter of the Year generates the curiosity of believers and of people who listen with curiosity to these forecasts in which some also interpret sociological and political clues.