Although Pompeo did not confirm it, it is possible that the sanction to BFI responds to the recent resolutions approved by the Cuban government to favor the import and export of the non-state sector, which gave an important role to that bank. 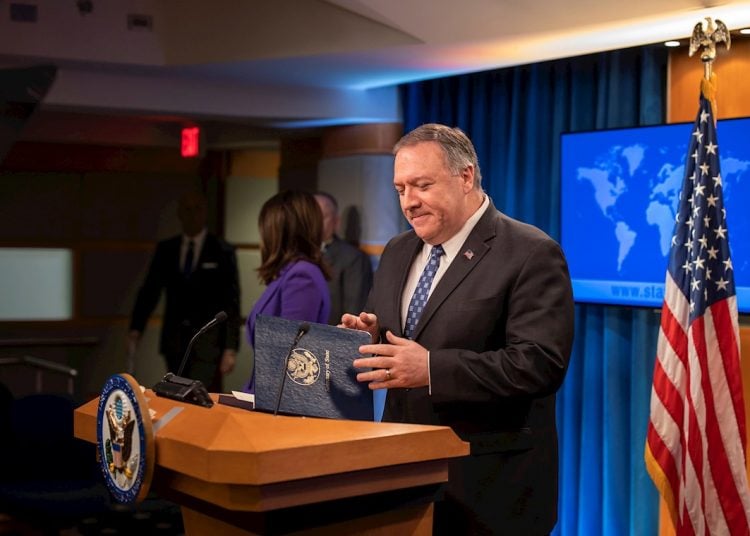 U.S. Secretary of State Mike Pompeo during a press conference at the State Department in Washington. Photo: Erik S. Menor/EFE.

The United States announced this Friday the inclusion of Banco Financiero Internacional S.A. (BFI), on the “black list” of Cuban companies with which Americans are prohibited from carrying out transactions.

U.S. Secretary of State Mike Pompeo revealed in a statement the new sanction, which is part of an escalation of pressure on the island before outgoing President Donald Trump cedes power on January 20 to the president-elect, Democrat Joe Biden.

“BFI is a Cuban military-controlled commercial bank that benefits directly from financial transactions at the expense of the Cuban people,” Pompeo said in a statement.

The measure will become effective “at the beginning of January,” once the State Department publishes the updated version of the Cuba Restricted List on its website, Pompeo explained, without specifying a specific date.

The Trump administration has tried to maximize pressure on the powerful military conglomerate Gaesa, which manages Cuba’s economic jewels, such as tourism, trade and oil.

In 2016, Gaesa took over the reins of Banco Financiero Internacional, and since then “uses BFI’s key role in foreign exchange to give military and state companies preferential access, secure advantageous exchange rates, and finance government-controlled projects that enrich the regime,” alleged Pompeo.

“The profits earned from these operations disproportionately benefit the Cuban military rather than independent Cuban entrepreneurs, furthering repression of the Cuban people and funding Cuba’s interference in Venezuela,” said the Secretary of State.

Although Pompeo did not confirm it, it is possible that the sanction to BFI responds to the recent resolutions approved by the Cuban government to favor the import and export of the non-state sector, which gave an important role to that bank.

According to a report published in December by The Havana Consulting Group, a consulting firm based in Miami, any Cuban entrepreneur who considers entering a business of import or export of products or services on the island would have the obligation to open a bank account at the BFI, controlled by Gaesa.

The sanctions that Trump has imposed during his four years in power on strategic sectors of Cuba have deteriorated the already battered Cuban economy, which is going through its worst crisis in three decades.

In the less than three weeks they have left in power, Trump and Pompeo are evaluating dealing a final setback to Cuba and returning it to the list of state sponsors of terrorism, from which the island was taken out in 2015 during the thaw with the previous government of Barack Obama.

Trump’s tough Cuba policy had a lot to do with his attempt to win over the vote of Cuban and Venezuelan Americans in the key state of Florida, and that last measure could be a gesture of appreciation for the support they gave him in the November elections.

Biden has promised to unfreeze the process of rapprochement with the island that Obama began and to reverse many of the sanctions that Trump has imposed on Cuba, but it is not clear if he will undo all the restrictions or when those changes can be expected.