They are travelers who arrived on three flights between June 30 and July 2, explained Russia’s Consul General in Havana, Nana Mgeladze, who speculated on the possibility of “mistakes” in Cuban laboratories, while many tourists have questioned the diagnostic tests carried out on the island. 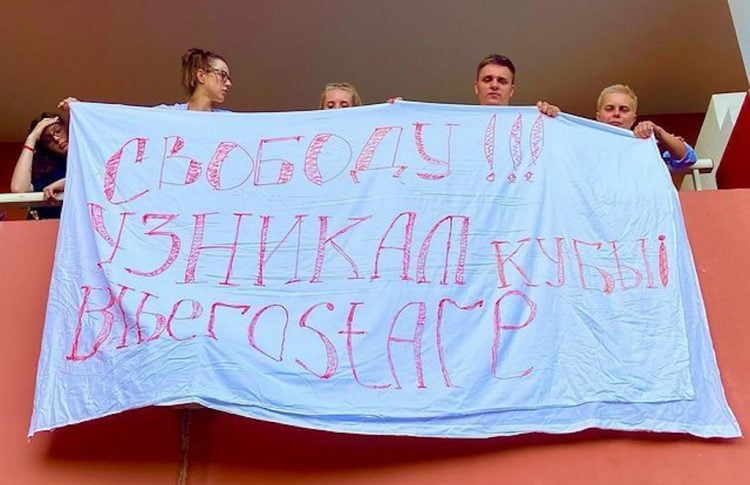 Russian tourists protest at a hotel in Varadero, Cuba, where they remain isolated after testing positive for COVID-19. Photo: katerina_tyuleneva_76/Instagram via Russia Today.

More than 150 Russian tourists who arrived at the Varadero beach resort, in Cuba, are isolated in their hotels after testing positive for COVID-19, reported the Russian Consul General in Havana, Nana Mgeladze.

They are travelers who arrived on three flights between June 30 and July 2, the Russian diplomat explained in statements to Sputnik News.

From the first of the planes, 133 people — including tourists and crew — tested positive for COVID-19 at the airport. A second test confirmed the presence of the virus in 33 of them, Mgeladze specified.

According to the source, another 130 visitors from the Eurasian country who traveled to the island before June 29 remain confined in hotels. One of those tourists, whose health condition presented complications, was transferred to a hospital in Havana.

Many of these travelers claim to be vaccinated against the contagious disease and have negative results of PCR tests that were done before flying to Cuba, which is why they have questioned the effectiveness of the diagnostic tests carried out on the island.

“Imagine the degree of indignation of our tourists, who have found themselves in a difficult situation. We don’t know what happened, the Cubans do not comment on those results. One could come to the conclusion that something is wrong in the laboratories,” said Mgeladze, quoted by Sputnik.

While the situation is clarified, the tourists will have to stay in their rooms. “They are already doing second and third tests for COVID-19, depending on the day of their arrival,” added the Russian consul.

For his part, the ambassador of the Russian Federation in Havana, Andrei Guskov, “maintains permanent contact with the Cuban ministries of tourism and health,” while the Consulate General coordinates with the representatives of these entities in Varadero, the media said, according to which “the Russian consumer protection office (Rospotrebnadzor) is following the situation from Moscow and is still in contact with the diplomatic legation.”

A report from the television station Russia Today (RT), which includes statements by the Russian ambassador, also informs that tourists have complained about the tests that were carried out upon their arrival on the island. According to him, visitors have denounced that nobody gave them the papers with the details about the procedure carried out, and that “in half of the medical certificates with the results of the local tests it is not indicated for which pathogen the PCR test was carried out.”

“This can’t be, so many positive in so many people,” they declared in a statement by video.

The television network assures that the Russian Foreign Ministry has addressed the matter in conversation with the Cuban ambassador in Moscow, Julio Garmendía.

The ministry called the diplomat’s attention “to the current difficult situation with Russian tourists in Cuba, who arrived in Varadero on vacation in recent days and are currently in self-isolation”, says a statement from the institution cited by the source.

The Russian Foreign Ministry points out that during the meeting, the island’s ambassador assured that the Cuban side will take the necessary measures to resolve the situation “in order to guarantee the conditions of stay and recreation on the island expected by the Russian tourists.”

However, the number of travelers from Russia reported as positive in Cuba does not seem to be decreasing and this Tuesday the Cuban health authorities reported that another 46 were detected after their arrival in Varadero.

The Eurasian country is currently the main source of tourists to the island, after the sharp decline this sector has experienced as a result of the pandemic. Sun and beach destinations such as Varadero and Cayo Coco have been receiving Russian visitors for months, and although positive cases had previously been detected among travelers, the figures have skyrocketed in recent days.

This situation coincides with the rebound of COVID-19 in Russia, for which the irruption of the highly contagious Delta variant is blamed, as well as the lax measures taken by the Russian authorities and the low vaccination rate in the Eurasian country, despite having several immunogens of its own.

In addition, it occurs in the midst of a complex epidemiological situation on the island, where cases have multiplied in recent days to exceed 3,000 a day, and which has the province of Matanzas — where the Varadero beach resort is located — as the territory most affected. The hospitals there are not enough, according to official reports, and not a few people believe that the original source of the explosion of infections could have been the increase in sick Russian tourists who could have infected local residents.