The brigade is made up of 40 health professionals, who will provide their services for three years and join the 259 collaborators already in that Caribbean nation. 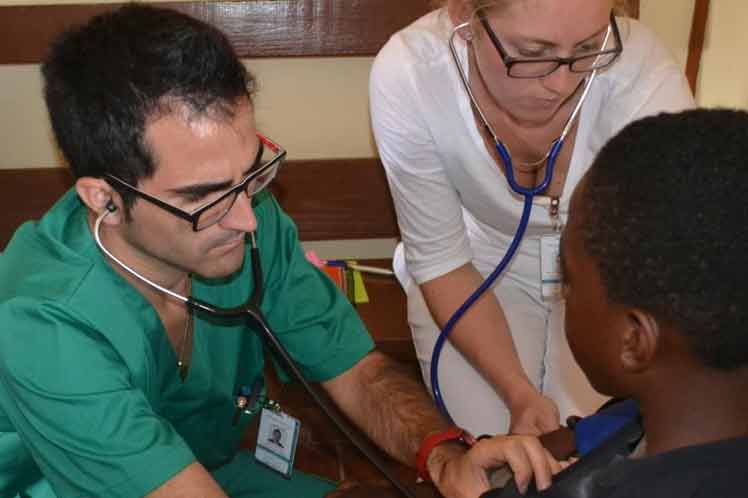 A new Cuban medical brigade in Jamaica was officially received by authorities of the Ministry of Health and Welfare of that Caribbean nation, according to the Agencia Cubana de Noticias (ACN) news agency.

The brigade is made up of 40 health professionals, who will provide their services in Jamaica for three years. Their arrival coincides with the end of the island’s medical missions in Bolivia and Ecuador, after the recent political upheaval in those countries.

The new Cuban collaborators in Jamaica were welcomed by Gail Hudson, director of Human Resources of the Jamaican Ministry of Health, as well as Patricia Ingram-Martin, head of nursing, who “thanked Cuba for its all-time collaboration,” the report said.

Meanwhile, Inés Fors, Cuban ambassador in Kingston, urged the island’s doctors and nurses “to maintain the ethical and professional values ​​of Cuban medicine,” the ACN reported, citing the website of the Cuban Foreign Ministry.

The new brigade is joining the 259 Cuban collaborators who are already in Jamaica. Of these, about 18 specialists form part of the “Misión Milagro,” through which some 16,000 operations have been carried out to improve or recover the eyesight of Jamaicans with few resources.

Cuba’s medical mission in Jamaica began to provide services in 1976 and although today it is mostly made up of nursing professionals, it also includes doctors, electromedical engineers and technicians. It works under the Technical Cooperation Agreement in force between the ministries of health of both countries.

Cuba and Venezuela urge U.S. to cease financing of terrorism and subversion against them

Last August, it had been announced that 290 Cuban health professionals would be sent to Jamaica, doubling the current number of specialists. Then it was said that authorities from both countries had already examined and chosen the new members of the group.

This Monday’s report does not specify when the rest of the collaborators announced in August will arrive in Jamaica.

Days ago the members of the medical missions in Ecuador and Bolivia returned to Cuba, with which the island lost two of its traditional spaces for this work. In the case of Ecuador, the closure was decided by the government of Lenín Moreno, while in Bolivia it was Havana that chose the return due to the political unrest in that country after the resignation of Evo Morales and the arrest of several collaborators

A year ago, in November 2018, Cuba withdrew more than 8,000 doctors from the “More Doctors” program in Brazil due to the threats of President-Elect Jair Bolsonaro to cancel that initiative if the Cuban government did not accept new conditions, including that doctors collect their integral salary.

In 2018, medical missions abroad contributed almost 6.4 billion dollars to Cuba, well above the more than 1.3 billion earned from “support services,” the country’s second declared source of income, which includes assistance to vessels and aircraft, among other services.