According to the state corporation Cimex, the regulation seeks “for a greater number of people to have access to this type of sales, in addition to combating hoarding and reselling using electronic commerce as a source.” 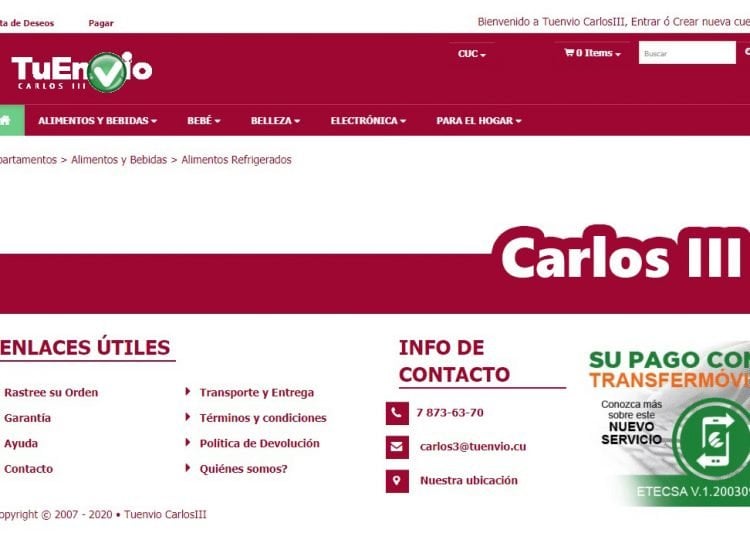 Screenshot of the site of the Cuban Carlos III online store in the electronic commerce platform TuEnvío, of the Cuban state corporation Cimex.

The Cuban state corporation Cimex announced a new mechanism for the regulation of purchases in its online stores, grouped in the TuEnvío platform, according to which each customer can only make one daily purchase, regardless of the beneficiary and the online store in which they make said purchase.

Since last June, after a closure to “adapt its operation,” the Cimex online stores and also those of the Caribe chain, started marketing only food, cleaning products modules, or a combination of both―at prices ranging between 10 and 30 CUC (Cuban convertible pesos)―, and established a limit of one daily purchase per store.

However, now Cimex clarifies that the regulation “is associated with the means of payment and not with the users,” according to a note published on the official Cubadebate site. This means that the same person can only make the purchase of one module per day through the bank account registered for the payment, even if they have more than one user registered on the platform or that purchase is made with another person as beneficiary, even if they live in another province.

Nor will it be possible to buy in more than one store, from those grouped on the TuEnvío platform, which also includes Villa Diana, located in Havana and belonging to the Caribe chain.

In its note, the corporation recommends its customers not to try to “buy more than once or with different users” and explains that “the verification is done once you make the payment, which is when the store can check from which medium you are paying, which is why we alert, the return of a second purchase falls within the period established for returns of up to 72 hours.”

Cimex affirms that this decision was reached after applying “technical variants that have not been effective until now” and regretted “the inconvenience that this measure may have caused.” “Its only objective,” it points out, “is to ensure that a greater number of people have access to this type of sales, in addition to combating hoarding and reselling using electronic commerce as a source.”

The regulation is applied at a time when the Cuban government is carrying out a campaign against those who sell places on lines―illegal organizers of lines, called “coleros” on the island―as well as against the resellers and hoarders of products sold by state stores, both physically and online. This campaign is part of the government measures to face the complex current situation of the Cuban economy, hit by the U.S. embargo and the coronavirus pandemic.