The intellectuals consider that the Cuban State has responded to the protests with “disproportionate political and legal violence,” and ask that after being released from prison “the private and public responsibilities in the face of violence associated to the outbreak” be defined “precisely, proportionally and strictly in accordance with the law.” 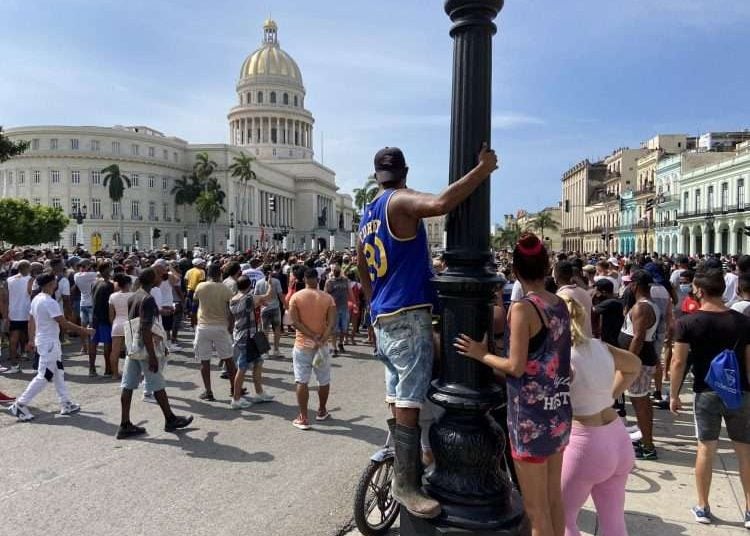 Cuban Capitol, in the background, one of the points of anti-government concentrations on July 11. Photo: https://twitter.com/reuterssarah

More than 30 Cuban intellectuals demanded this Monday the release of the prisoners for the July 11 protests, after the “exemplifying” sentences of 127 of those involved were made known. The document seeks the attention of academics and artists, “without ideological exemptions,” and invites them to join the demand.

“It is a general intellectual duty of academics and artists, at any time and in any society, to condemn violence and arbitrariness without double standards; without ideological exemptions or subterfuges of realpolitik,” they affirm in an open letter called: “Manifesto against silence, for justice.”

“The positions of dissimulation, silence or complacency, instead of defending vulnerable citizens and making the authorities rectify, will only perpetuate and amplify the abuses and conflicts. It will turn each one of us, people of ideas and words, into accomplices, conscious or hidden, of violence and injustice,” they affirm. La Joven Cuba published the Manifesto this Monday.

The signatories propose that after a general release there be a debate on how to proportionally define and in accordance with the law the responsibilities for the violence that occurred on July 11, but with a maxim: “The law cannot subordinate justice.” They also consider that “it is a humanist duty” to “accompany the victims of State violence” because these protests were “a social outbreak expressed through civil disobedience.”

Said protests were due, in the opinion of the signatories, to “the government’s mismanagement of the economy” and the “authoritarian ways of managing the socio-political conflict and participation in Cuba” in light of which “we call on our intellectual colleagues and artists to join us. The prisoners are — or can be — our relatives, neighbors, friends. Ourselves.”

The intellectuals denounce “the excessive use of violence” by the State in the demonstrations, which caused the death of a demonstrator, and which was followed by “house raids, beatings of demonstrators” and the “arrest of more than 1,000 citizens.”

They also condemned the court trials “of more than 500 citizens” in which “exemplifying sentences” of up to 30 years have been imposed, “public derision” in the opinion of these intellectuals who see “disproportion in sentences, violations of procedural standards” and an “exemplifying exhibition” of the processes in the official media.

“Those Cuban men and women have only exercised their right to have rights,” for which they demand that those involved in excesses in the demonstrations, “whether they are citizens or state agents,” be “prosecuted proportionally and in accordance with the law, never punitively.”

The letter also recalls that, for the most part, the young people prosecuted come from vulnerable neighborhoods, affected by the acute economic crisis and by government mismanagement, and underlines that there is a disproportion of sentences, violations of current procedural standards and an exemplifying display of processes by the national state press.

The document is being supported by another large number of Cuban intellectuals.