Pedro Luis Ferrer has left his name in the outskirts of existence and has become a word that seems made for him: a minstrel.... 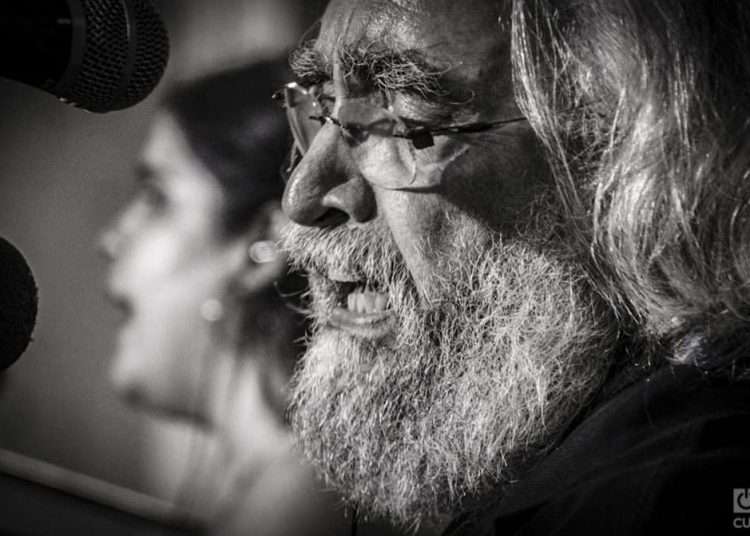 Who is Pedro Luis Ferrer? a 21-year-old girl once asked me during a heated conversation about Cuban music. I don’t remember the time or the place, but I do know that that question pounded in my head. In the first place, her question seemed doomed to simplicity, but it became food for sleeplessness. Some days I thought about who Pedro Luis Ferrer was during those inner dialogues that border on madness.

Perhaps the singer-songwriter doesn’t have that answer about himself either. I say this because it is too difficult an exercise to have all the defining certainties of the personality, there are always insurmountable traps in the mined path of life. But we know that Pedro Luis Ferrer has left his name on the outskirts of existence and has become a word that seems made for him: a minstrel, a singer-songwriter of the shadows, a taxidermist of the most privileged roots of Cuban music. Each one of his followers will know how to define him as he sees fit, according to what he has seen and heard in his songs. According to what he feels when the minstrel talks to him about abuelo Paco, about the cow Pijirigua, about the Santeria friend, about the butterfly, about the myths that are no longer and about the loss that ultimately put the course of generations on turbulent waters.

Pedro Luis Ferrer has been a life that has walked among Cubans despite the silences surrounding his voice, his songs. He has been a man who opened the hand of freedom with songs written with the coherence of the path he decided to retrace on his own and at his own risk, with no greater pedestals than the guitar, the voice and the cries that have not been heard in the heat of his concerts while his songs were lost in the media fog.

Very few singer-songwriters’ legends have been heard as that of Pedro Luis. True legends sometimes, others based on popular rumors that he himself has denied with that humor that has served him to take refuge even at times when mentioning his name in some media space was a ticket to ostracism, or a show of daring or courage, or simply wanting to do justice with music that has portrayed us as a nation, which is nothing more than doing justice with Cuba. Among those legends, he laughed jokingly at the one that talked about having a concert suspended and being removed from the stage in the middle of the presentation.

Pedro Luis, let’s say it clearly, is a living heritage of Cuban culture. He has thoroughly studied the contributions of the changüí, the guaracha, the sones montunos, the trova, and has incorporated them into a repertoire with a strict sense of historical responsibility and with songs dedicated to the destiny of speaking about Cuba from the most diverse angles and with all the freedom that allows music composed from coherence and with no other search than being true to oneself.

Pedro is also a school. In his concerts, he takes advantage of the spaces of silence between songs to talk about the origin of Cuban native rhythms, to make very serious jokes about the musicians and review how he has written several of those songs that have become emblems due to time and reason of audience. Together with his wisdom born within his family and his connections with the Cuban people, he has incorporated a spicy humor full of Cuban images that have made his audiences burst into laughter at his concerts, both in the heart of Havana and in the bohemian nights of the illustrious Mejunje of Santa Clara, a very Cuban humor that distinguishes him among the guild, as he calls his singer-songwriter colleagues.

His name is also directly related to the prohibitions and censorship that have weighed down Cuban culture for decades. He has mocked the walls and the silences. For years no official institution has offered him to organize a concert or some kind of presentation. Either by cowardice of some official or by a well-established resolution that from time to time has surrounded “problematic” musicians or another artist with the same condition. On one occasion, to make fun of the looks from the other side of the sidewalk, he named a tour of his the tour through the patios and rooftops of Havana. He later said that it became one of the years in which he sang the most in the city.

His themes, it is known, have been scrutinized in the real Cuba, in the marks of the country that most carry on their backs and that are for life, even if the geographical condition is different. “Abuelo Paco,” “100 por ciento cubano,” “Fundamento” are just three of the themes with which he has spoken openly about the country and with which he has also taught to love the true Cuba.

The author of “Cómo me gusta hablar español” has not been absent from the passage of time. In other words, he has not stopped to rest between the sheets of repetition, which in reality is the closest thing to the artist’s death in life, and he has been able to take the pulse of the passing years in Cuba. One of the examples, not so recent, was the song “Ahora que te permiten criticar,” an ironic composition about the Cuban reality that talks about how some artists got together after seeing the institutional green light on the bandwagon of criticism while he had been doing the same even when the terrain was more inhospitable, and the consequences were paid for by sitting down to write with one’s own criteria.

Today Pedro Luis turns 70. The date should be honored in the Cuban state media, in the institutions dedicated to the promotion of music. Perhaps some program will make a small mention and hopefully a work will appear that goes deeper into his work and that recalls the place he occupies in Cuban culture. But optimism, in this case, is an empty room.

Pedro will celebrate his birthday at a concert in the city of Miami, where he has lived for a few years and where he has said the same thing as in Cuba. That is to say, where it has been the same Pedro Luis Ferrer that we have met on the national stages. He will sing together with his group and his daughter Lena Ferrer, another performer and composer with a work of proven quality that closely follows in the footsteps of her father.

I don’t think that in the memory of Pedro Luis Ferrer the nostalgia for Cuba pales. Because anyone who listens to him is not only listening to the singer-songwriter, but also to the heartbeat of Cuba, with its native rhythms, its destinies and those hopes for the island that perhaps are renewed in each of his concerts both here and there.

Today his followers on the island will hear his songs again with the hope of seeing him at those concerts that provoke that close communion among Cubans and where it is felt that all of us are (or have been) that real Cuba that surrounds us and that has been, among other things, the sweetest and most eternal thing that his songs gave us.