Valentina Matviyenko and Francois Hollande are visiting the island invited to the celebrations for Havana’s 500 years. 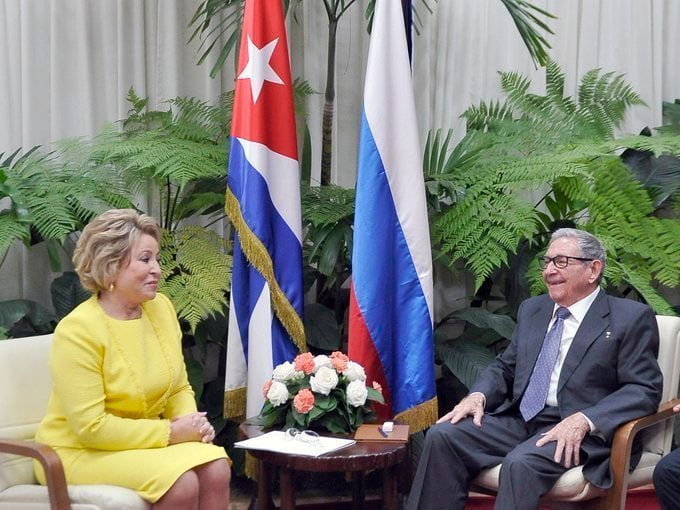 The former Cuban president and leader of the Communist Party of the island, Raúl Castro, talking with the chairwoman of the Russian Senate, Valentina Matviyenko, in Havana, on November 16, 2019. Photo: @PresidenciaCuba / Twitter

The former president and leader of the ruling Communist Party of Cuba (PCC), Raúl Castro, received this Saturday the chairwoman of the Russian Senate, Valentina Matviyenko, invited to the celebrations for Havana’s 500 years.

The ex-president, who participates in few public events since leaving the State in the hands of Miguel Díaz-Canel in 2018, also met with former French President Francois Hollande, who also traveled to the Island for the celebrations of the half millennium of the Cuban capital.

State television broadcast images of the meetings, described as “cordial,” which took place after the official reception offered by Díaz-Canel in the renovated Havana Capitol building, partly restored with millionaire funds donated by Moscow.

Castro and Matviyenko conveyed their “mutual satisfaction over the excellent state of relations” between the two countries, united by “historical” ties dating from the time of the former Soviet Union.

Meanwhile, the leader of the PCC expressed to Hollande his pleasure over the good state of relations and highlighted the French support against the U.S. economic and trade embargo on Cuba.

Havana celebrated its 500th birthday this Saturday, for which the Cuban authorities spared no effort, and had its culminating moment with a lavish gala on the steps of the Capitol for some 5,000 people, including Cubans and foreign guests.