Asymmetries in territorial development projects are having an impact on various areas of Cuban economic and social life. 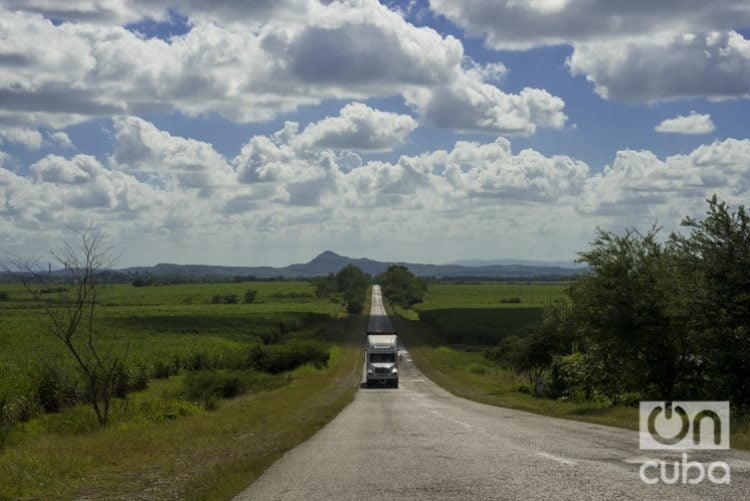 Even in times of pandemic driving on Cuba’s Central Highway is a challenge. At just over six meters wide, the main communication route in the eastern half of Cuba long ago became obsolete.

When two vehicles of a certain size meet on the road, the distance that separates them is usually measured in a few tens of centimeters. Driving through it also implies facing an endless succession of tractors, animal-drawn carts, cyclists, pedestrians and even head of cattle roaming freely.

Beyond these disadvantages, the Central Highway remains practically the only route for those who travel by road to the provinces the National Thruway never reached.

Of the eight lanes on this expressway, which started from Havana at the beginning of the 1970s, only three reached the city of Sancti Spíritus in 1988. Other incomplete sections entered service at the Guantánamo and Santiago de Cuba accesses. Just a little more. Not even the road that connects the end of the highway with the Central Highway, in the municipality of Taguasco, from San José, benefited from investments to prepare it for the volume of vehicles it would have to support.

“This road is not designed for such heavy traffic as the one it is receiving. It is a third-class road converted into a first-class one,” an official from the Provincial Highway Center acknowledged in November 2017. By then, the nine-kilometer stretch was undergoing its biggest maintenance in years. The more than 2,500 tons of asphalt and 300 cubic meters of concrete used for this were not enough, however, to bring it to the height of its road traffic, which was already higher than 2,000 daily automotive equipment; many of them large-sized.

The improvements that the strategic Sancti Spíritus highway did not get were, instead, approved by the Palace of the Revolution for the Varadero section of the Vía Blanca, as well as for the access roads to the Mariel Special Development Zone and for the city of Artemisa. With an extension of 7.5 kilometers and a layout of four lanes, the last of these projects could have been perfectly adapted to the needs of the bypass between the thruway and the Central Highway. The greatest irony of the case is that part of the materials used in the Artemisa work come from a disused bridge located in Taguasco.

In the context of Sancti Spíritus, the 34 million Cuban pesos (CUP) destined to reduce 10 minutes of the trip between the “Villa Roja” and the capital would have predictably served to reduce the conditions that make the area one of the roads with the highest amounts of accidents in the country. Not by chance does the section between the end of the National Thruway, the link with the Central Highway and the surroundings of the city of Jatibonico, receive from the locals the nickname of “highway of death.” The fact that all the traffic that moves from one side of the island to the other converges there doesn’t help much, as might be expected.

Between 2000 and 2019, the province of Havana benefited from — at least — 55% of the funds allocated by the State to new investments. In other words, each of the capital’s citizens received resources corresponding to five times more than those allocated to any of their compatriots from the “interior.” Last year, the gap deepened, reaching a ratio of one to six (more than 5.2 billion CUP were spent in the metropolis, while for the rest of the island it was 3.8 billion).

Budgetary privileges include Artemis. True to the historical trend, in 2020 its part of investments (958 million CUP) was not only the second largest on the island; rather, it doubled those corresponding to the other provinces that followed it in the list (Holguín and Santiago de Cuba, each one in the vicinity of 430 million). As the population of both eastern territories doubles that of the western jurisdiction, the imbalance in terms of the per capita of money allocated was actually greater.

What is unique about the case is that if the statistics of the West were reviewed ignoring the exceptionalities of Havana and Artemisa, the region would show similar numbers to those of the rest of the country (335 CUP assigned to each inhabitant of the west, for 370 CUP to those of the center, and 306 to those of the east). These calculations, although they account for interregional inequality, at first glance seem to indicate that this inequality is not insurmountable.

But the facts can rarely be judged in a linear way. Although the Cuban constitutional tradition defends a model of a unitary Republic, without privileges between the different territories, in practice Havana and its area of ​​influence have benefited from the authorities’ active policies. The most visible expression of this is the Government Group for the Support of the Capital, which since 2012 coordinates the work of ministries and other bodies of the central state administration.

“All the support that the country can…must be given (to the capital), starting with all the national institutions in Havana,” Cuban President Miguel Díaz-Canel said in April when proposing new containment measures against COVID-19. Unlike what happened in the other provinces, where the increase in the number of infections by the new coronavirus was accompanied by the suspension of public transportation and strict curfews, in the capital decisions of this magnitude were barely implemented for a few weeks in September 2020, despite the fact that the city has been the epicenter of the epidemic on the island.

Following a line of thought that rationally combines the capital’s usual privileges — the metropolis has concentrated, on average, more than half of the cases and the largest number of strains —, at the beginning of May the Ministry of Public Health determined that the efforts in the first stage of the health intervention would be concentrated in Havana (778,000 participants), Matanzas (563,000), Pinar del Río (270,000) and the Isla de la Juventud (49,000). Outside the West, only Santiago de Cuba (743,000 subjects) expects to reach such a proportion of immunizations with respect to its total population.

The priority health contingency strategy finds parallels in all areas of national life. Just weeks ago, when the western section of the National Power System (SEN) collapsed due to breakdowns in thermal power plants and intermittences in the supply of fuel, the blackouts suffered by the residents of the capital motivated an active government response, which even involved mobilizing the Revolutionary Armed Forces (FAR). What was not said at the time was that the power outages had been taking place in the rest of the island for several days, without it having been considered pertinent to set the bells ringing. Nor did anyone stop to analyze the statements of the Minister of Energy and Mines Liván Arronte Cruz on the fact that the bulk of the damage occurred in Havana only because the transmission lines did not have the capacity to transfer more energy from the center and the east.

Four of the eight thermoelectric plants in the country have been built within a radius of no more than 100 kilometers around the capital. In addition, the West benefits in the first instance from the electricity produced by the Energas project and the floating plant anchored in the bay of Mariel. They are, in round numbers, more than 1,500 megawatts contributed by the so-called “base generation” and the gas industry (the most efficient in the country), practically the same amount of energy that the power plants of the other two national regions deliver to the SEN as a whole.

The project for four new generating units being carried out in Mariel and Santa Cruz del Norte will expand the capital’s “advantage.” The investment is 1.2 billion euros that must be translated into around 800 additional megawatts, with the benefit of an efficiency that other industries will not be in a position to emulate. By way of comparison, the main investments made outside the West (in Felton, Holguín, and Santiago de Cuba) barely got 76 million euros and 30 million CUP from the treasury; less than what was allocated to the rehabilitation of one of the 100-megawatt blocks in Mariel (89.5 million euros and 230 million CUP).

The means of communication and energy are key elements in any development strategy. And in Cuba, they are also examples of the inequalities between regions that burden the future of the country. But they have never been included in the public debate as a matter of urgent consideration. Rather, the opposite: the punitive response to some of its consequences — such as the internal mobility of the population — has found support among diverse sectors of the citizenry.

Meanwhile, there is the link in decisions as strange as the one that recently established distinctions between the country’s airports, qualifying those of Havana and Santiago de Cuba as “national,” and those of Varadero and Cayo Coco as “tourist,” with payments in freely convertible currency for Cubans who for reasons of geographical proximity decide to arrive through the latter; a benefit that has as direct beneficiaries the people of Havana and Santiago de Cuba.

The asymmetries that are founded in such circumstances can become as deep as they are already indefensible. There are far more differences between an eight-lane thruway and a highway built 90 years ago than those perceived by a driver at the wheel.