The famous Havana restaurant where the Obama family dined during their visit to Cuba, today is feeling the effects of the Donald Trump administration’s measures against the island. 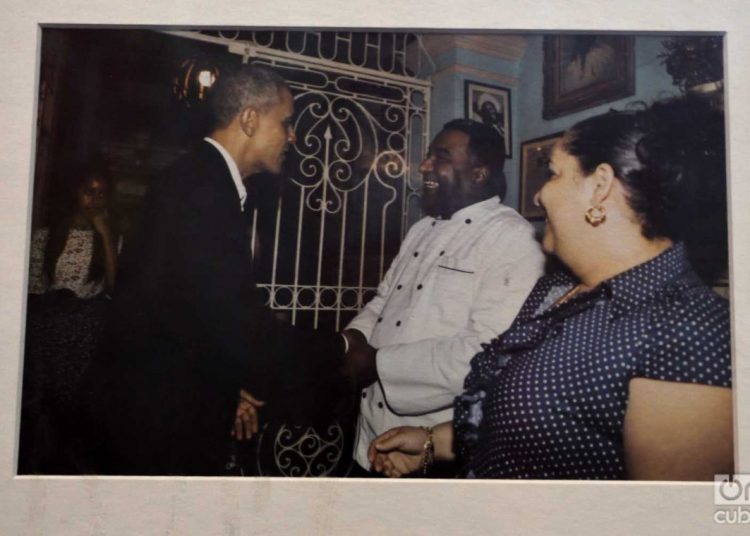 Photo of the historic visit of former U.S. President Barack Obama (left) in March 2016 at Havana’s San Cristóbal Restaurant, where he is greeting its owner, chef Carlos Cristóbal Márquez (center). The image is kept in the restaurant. Photo: Otmaro Rodríguez.

Three years ago, Havana’s San Cristóbal Restaurant became a symbol of the new era that Cuba and the United States were living. During his visit to the island, in March 2016, then President Barack Obama dined with his family in the “paladar” founded in 2010 by Chef Carlos Cristóbal Márquez and the entire world had its eye on the spot.

“It was a unique moment. That he chose us over other excellent restaurants in Havana has been very important for us,” recalls Márquez, who has a recognized experience as a chef in emblematic Cuban hotels such as the Riviera, the Capri and the Nacional, and also outside the island.

It’s not the only famous visit to the restaurant on San Rafael Street, in Centro Habana, where politicians like former Chilean President Michelle Bachelet and former Brazilian President Lula da Silva have eaten, as well as celebrities such as Kardashian and music stars Beyoncé and Jay-Z.

However, Obama’s dinner, as explicit support for the island’s private sector, marked a before and after, and left a trail that many foreign visitors have tried to follow. Above all, from the United States. But today’s reality is very different.

Donald Trump’s arrival to the White House first put a stop to bilateral rapprochement and then he began a reversal that he has been accelerating in recent months and that on its way has eliminated Americans’ travel to Cuba, especially those in the people-to-people category and cruises.

And the San Cristóbal, like many other restaurants and private services, is also feeling the effects.

“Since Obama’s visit until now everything has gone downhill. All the good that was achieved is gone,” explains Márquez to OnCuba. “President Obama made some progress, small but important, and it is a pity that it was in the last days of his mandate, because if it had been before we might be in a better position to face what is happening now with Trump, who has insisted on rolling back everything.

“And even if he says that his measures are against the government and not against the people, he contradicts himself, because they are affecting us too much, not only me but everybody, including his people,” he says.

As a result, the influx of customers has decreased, according to the owner of the restaurant, up to 20% of what they received before. “Right now we’re not having reservations for lunch, which is a slow schedule, but that was always moving,” he says. “And in the afternoons and evenings there has also been a slump. Practically what’s being earned is to maintain the restaurant, and I don’t rule out that we could have losses.”

The recent Trump administration’s measures, according to Márquez, have been a blow to the self-employed sector, an additional burden that exacerbates the effects of the blockade/embargo “that does affect, but with which we have always lived.”

“If you cut back on Americans’ visits, logically that has a negative impact on us, who work primarily for tourism. Here we received people from the cruise ships, groups that came in the people-to-people category, people who came on their private yachts, in their private planes, and all that is now prohibited. And if you go to Old Havana, you will see that my colleagues also have a difficult situation and are worried. Maybe some will have to close and others will be in a tight spot, because the arrival of cruise groups was higher there,” he confirms.

The effects on the private sector are not exclusive to the owners. The workers also feel them, and a lot.

“We have a basic salary, but we live on tips, like most of those who work in tourism, and the fewer clients we receive, the fewer opportunities we have to earn and support our families,” explains Leonardo Herrera, a doorman who has been working in the restaurant for six years.

“Right now we are in the off season, which is national and has always existed in the summer, but this time it is extreme, because a lot of American visitors are our sustenance, and they are not coming,” he adds.

“It has been a radical change. Although we don’t ask customers where they come from, it’s easy to see that groups of Americans have dramatically decreased after the ban on cruises. It was something that had been happening since Trump took power, but now it’s worse.”

His assessment coincides with that of Alexander Peña, one of the restaurant’s captains, for whom “the effects started before, since Trump began to take measures against travel and issued a warning saying Cuba wasn’t a safe country.”

“Since then, changes started being seen in the number of visitors from the United States,” Peña tells OnCuba. “However, Americans were still coming, not only on cruises, but also on cultural and other types of trips, but these last measures have led us to a negative peak, which is easy to confirm with the number of clients we are having every day.”

This Thursday, for example, they only had six occupied tables, something unthinkable a short time ago. And its effects can go beyond the restaurant.

“The private sector works like a chain,” he says, “and if we have less income, then we will spend less on other services, and the people who provide those services, the food or other products, will also be affected.”

Herrera looks a little further and thinks about the future of the restaurant itself, which on November 16―the same day of the 500th anniversary of Havana―will reach its nine years.

“I don’t think the solution is to close, but perhaps it will be necessary to decrease the staff. The owner has to pay taxes, salaries, and also the supplies, which are now more difficult to obtain because of the shortages. Private restaurants don’t have wholesale price facilities and that increases expenses. Hopefully it won’t be necessary and everything can improve, but for the time being Trump’s decision to stop tourism is affecting us a lot.”

Faced with this difficult scenario, work is the best solution in the San Cristóbal.

“We still have customers from other places, because fortunately we are a well-known restaurant, but in this situation we try to provide the best service, with the quality those who visit us deserve,” says Peña.

Chef Márquez, for his part, does not deny that there are internal deficiencies and difficulties in Cuba, but he affirms that in his restaurant “to get ahead we have to make an effort and take measures. The workers are aware of that and they are making a big effort, because we’re all a team.”

“Trump should sit down and analyze what he has done so that he realizes that he’s not helping us as he says, but quite the opposite. But whether he does it or not, we will continue working as usual. Or even better. At least that’s how it will continue to be in the San Cristóbal.”