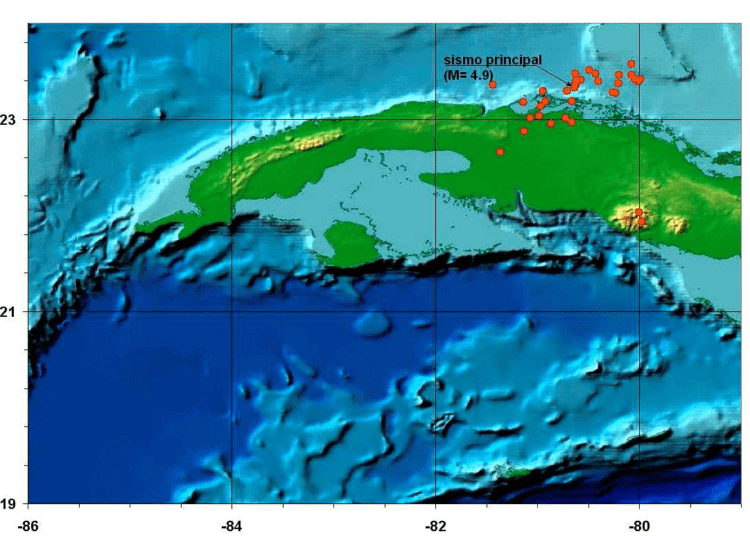 In the early hours of Friday , exactly at 6:23 am ( Cuban time ) , the third perceptible earthquake in 2014 took place, nearly 15 hours after another of magnitude 4.9 in the Richter scale was felt in regions of Havana , Matanzas and Villa Clara provinces.

Given the concern of people inside and outside the island, Trabajadores newspaper contacted Central Station of the National Seismological Service Specialists of the country, located in Santiago de Cuba, who clarified some questions about a Special Newsletter.

In Cuba, it is unusual to see this type of seismic events in the central and western parts of the country. What is the reason for these recent earthquakes?

This seismic activity in this region is rare, but its occurrence is normal by the presence of seismic areas, which as the name implies, are areas with structures or tectonic faults with potential to generate earthquakes. Throughout the seismic history of our country there have been several earthquakes and some of them have been noticeable in places like Varadero , Sagua La Grande , Remedios and Caibarien

The seismic areas that may be associated with these earthquakes are known as Cuban North and Hicacos that can generate earthquakes of magnitude up to 5.5 in the Richter scale.

What recurrence of these seismic events should be in the area?

The presence of clusters of earthquakes in this area is the product that occurs after an earthquake with significant magnitude, causing a break in the earth’s crust and as part of the realignment of faults, it continues to release energy, manifested in lesser magnitude earthquakes called aftershocks; some may be felt by the population.

In this case until the publishing of this newspaper there have been a total of 36 ranging from 0.5 to 3.9.

In 2013 in Cuba there were recorded 14 perceptible earthquakes, relatively low compared to the annual average of 20 to 50 tremors of medium and moderate intensity that often occur on the island, mainly in the eastern region.