Archaeological Discovery in the central park of Sancti Spiritus

by Diana Ferreiro
in Science in Cuba
0 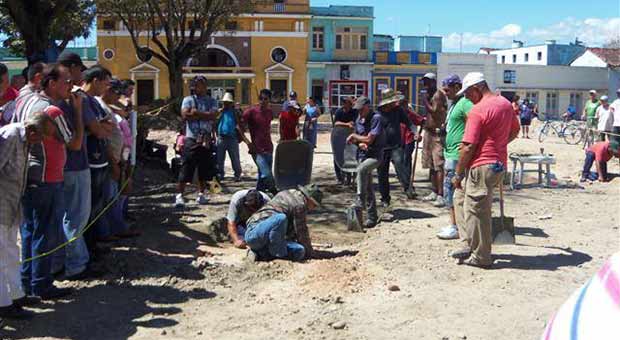 Nobody imagined that the preparations for the celebration of the 500th anniversary of the founding of the town of Sancti Spiritus were to be interrupted by the discovery of archaeological remains in the middle of the city. The demolition of the Serafin Sanchez Park, for the sake of its subsequent reconstruction revealed the existence in that place of debris from the Convent of San Francisco, built there in 1716, and possibly of its inhabitants.

The findings consist of a piece of slab 40 by 40 inches, part of the wooden columns and a column of brick and mortar. They also found horseshoes, nails, blacksmith tools, and so on, suggesting the possible existence of a stable or barn. More recently, around the park, experts found what appears to be a niche with human remains, possible sign of a cemetery, common during the time in the vicinity of the monasteries.

As the city historian, Maria Antonieta Jiménez , said, the Convent of San Francisco is considered one of the first educational institution in the Villa of the Holy Spirit and an architectural gem of the eighteenth century in Cuba .

They say that the building was demolished, at the request of the villagers themselves, between 1899 and 1914. Later on its foundation the Serafin Sanchez Park was built, which suffered changes in the 1970s, so now they will rebuild it and restore its original design.

Specialists at the Provincial Heritage Center, archaeologists and researchers direct the actions that might lead to new discoveries, among which may be evidence of the existence of a passage to the main church

Mijail Mulkay: Cuba is always in mi mind and in my heart

Accounting on your own