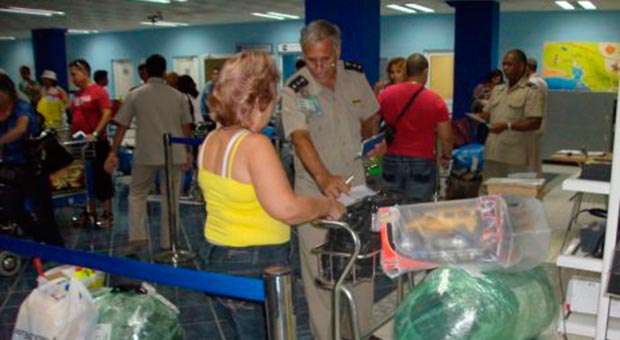 In the past month questions have raised regarding Resolutions 222 and 223 of 2012, issued by the Ministry of Finance and Prices and Resolution 122-2012 of the General Customs of the Republic of Cuba, published in the Official Gazette No. 30.

We then will try to clarify these questions, from explaining the changes that were introduced.

1 – In which cases people don’t pay

It remains that ALL passengers, whether they are permanent residents in Cuba or not, may import free from payment of customs duties personal effects (equivalent to 25 kilograms, if it applies the alternative method of valuation by the weight).They can also import duty free items that according to the law, are exempt from customs duties (See items in this case).

Similarly it stays that no customs duties are paid for the items, as part of passenger baggage, definitely enter the country with a value between one and $ 50.99 pesos (equivalent to 5 kilograms of Miscellaneous if the method applied is alternative valuation weight / value) which, together with the personal effects explained above, make the 30 kilograms that any passenger can bring without paying customs duties, when the alternative valuation method applied is the previously noted.

The personal effects, items exempt from the payment by the Law and those to a value of $ 50.99 pesos that are exempt are not considered an import so for the purposes of applying the provisions of Resolution 222-12 MFP on the calculation of tariffs in CUP and their payment in CUC will be considered as second import, the second time a passenger brings into the country articles paying customs duties.

2 – in which cases people pay

It remains that ALL passengers that are permanent residents in Cuba or not, can enter the country as part of their luggage and outside their personal effects, items worth up to a maximum of one thousand dollars. Customs duties are payable by those who are not part of their personal and exceeding the value of $ 50.99 pesos, as explained in the previous section.

It also remains that Customs can assess items imported by passengers from: their statement, invoice or Customs Valuation List for non-commercial imports.

Similarly, there are no changes in use , in cases provided ,of  the valuation method by which the weight , items considered MISCELLANEOUS are valued at the rate of $ 10.00 pesos per Kg is defined as miscellaneous footwear , clothing, food , toiletries and household , jewelry , lingerie , perfume and the like.

Items not considered Miscellaneous, such as computers and appliances and lasting effects, household items, hardware, auto parts, computers and accessories, etc , will continue to be valued independently applying for their assessment, one of the valuation methods according to the Law customs can use : invoice , statement by the passenger or the list of customs valuation .

As of August 2, Resolution 222-12 MFP modified progressive rate for the calculation of the fees to be paid by those passengers entering the country items out of their personal effects and excess of fifty dollars and ninety nine cents ($ 50.99).

At present, in accordance with Resolution 222-12 MFP they only apply two eliminating the middle one, being as follows:

This represents a reduction of payable customs duty.

In the case of Cubans and permanent foreign residents in Cuba.

These passengers will continue to pay in Cuban pesos (CUP) customs duties on imports engaged first in a calendar year (January 1 to December 31), defined in this case by import those items and products not part of their personal effects and are not included among those exempt ie free from payment of customs duties. (See point 1 – In which cases people dont pay above).

In the second and subsequent imports in the calendar year, or when items enter the country paying customs duties for the second or more times, the calculation of tariffs will be made in Convertible Pesos (CUC) and customs duties are paid in CUP, according to the exchange rate in effect at that time.

Disclaimer: Throughout the remainder of 2012, to implement the provisions of Resolution 222 of the Ministry of Finance and Prices, imports that carry passengers from August 2 to  December 201231, are considered within the calendar year.

In the case of Cubans and foreigners that are not permanent residents in Cuba.

The payment of customs duties remains in CUC as it was before August 2.

It maintains that for the valuation of articles in Customs contained in a parcel an alternative method of shipping weight / value is used, whereby the customs value of sundries is obtained: footwear, clothing, food items, home and personal toiletries, jewelry, lingerie, perfume and the like, by weight in Kgs. The appliances and other durable equipment and parts thereof and the like are not considered miscellaneous, so they are not weighed, but individually and independently valued and its value is considered within the limit value of shipments.

Until September 3 , to calculate the value of shipments containing miscellaneous sent by air or sea , it applies one (1 ) kilograms is equal to ten ($ .10.00 ) pesos. However, for shipments by the Postal and courier routes, one (1 ) kilogram equals twenty ($ 20.00) pesos .

Starting on September 3, 2012 and in accordance with Resolution 122-12 of the Chief of the General Customs of the Republic valuation method will be unified and will apply in all cases that the value of one (1 ) kilogram of Miscellaneous equals ten ($ .10.00 ) eliminating the valuation weights 1 kg equal $ 20.00 pesos , which was previously used for shipments by mail and courier .

Limit and payment of customs duties

What Resolution 223-12 amends is the currency in which customs duties are paid , as from September 3 , payment of customs duties on shipments by any means will be in convertible pesos or CUC for those receiving shipments in Cuba .

A simple way to obtain much will be paid for a shipment containing only miscellaneous (clothing, shoes, jewelry, perfume, food, linen, toiletries and household items) is multiplying Kgs they weight by $ 10.00, minus $ 30.00. This only applies to consignments containing only as miscellaneous since durable equipment, computer supplies, etc, are valued independently, according to the provisions of the Act: invoice, statement or listing of customs valuation. The value of items not considered to be part of the Miscellaneous is allowed a maximum total of 200 pesos.

It maintains that all travelers may import free of payment of customs duties, up to 10 kgs of drugs, provided that they come in their original packaging and separated from other items.

Foods are among the items considered miscellaneous and is way be treated for valuation limit and payment of customs duties, entering the country being subject to checks and authorization of health and veterinary authorities at the border