javier
in Foreign investment in Cuba
0 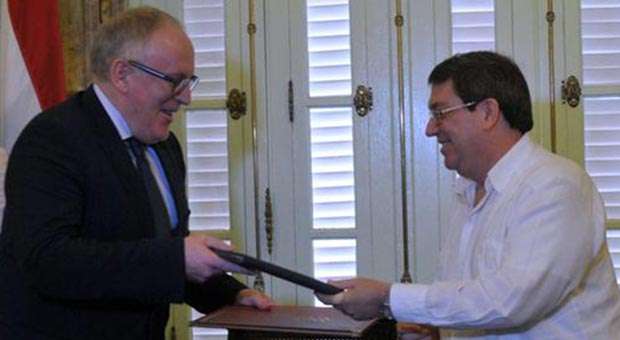 “In Cuba interesting facts are taking place, and it is time that the EU upgrades its relations with the island.” The Minister of Foreign Affairs of the Netherlands, Frans Timmermans, made this statement to the Vice-president Ricardo Cabrisas , one of the top Cuban officials that received him during his working visit to Havana.

Regarding economic reforms, he said that “these positive developments deserve our attention.” Another time he added. “It think it’s time for Europe to revise its position on Cuba and negotiate a new stance” That a foreign minister of the 28 say this has implications.

The arrival in Havana of a Dutch foreign minister is an event of high caliber in foreign policy. The European Union has a common position towards Cuba, which conditions any progress in relations with the island to the realization of internal changes. This regional approach was adopted in 1996, in return for the suspension of Title III of the Helms- Burton Call (part of the U.S. blockade), which had affected US-based European business in Cuba.

Timmermans came with spirits of reconciliation. “Dialogue is the best way to work instead of turning the back on each other. ” He was probably speaking not on behalf of the Netherlands, but the community of nations that includes most of the Old Continent countries.

Changes or total suspension of the Common Position spent years in the political agenda of the Cuban Foreign Ministry and its counterparts in Europe. The usual European interlocutor with Cuba was Spain, but the ideological differences with the ruling Popular Party have distanced Madrid from Havana. Amsterdam appears on the scene with a good credit history, it is the second largest trading partner in Europe for the Island. Cuba and Holland exchange goods worth $ 700 million during 2012.

The Dutch initiative follows a season of change; European Foreign Ministry began 2014 refining a proposal of Political Dialogue and Cooperation, prepared by the European External Action Service. But the inclusion of demands for changes in the Cuban political system could bring the convention to a stalemate.

Timmermans traveled to Havana accompanied by businessmen from his country, who, as usual, were provided information on the Special Development Zone Mariel and opportunities for foreign investment in Cuba.

The website of the Dutch Embassy in Cuba indicates that “the economic relationship between Cuba and the Netherlands is stable, and in the field of agriculture and trade of nickel with Holland contacts are essential for Cuba. In other areas – such as tourism, transportation, and oil and port industry – there are niches for business investment for Dutch companies. “