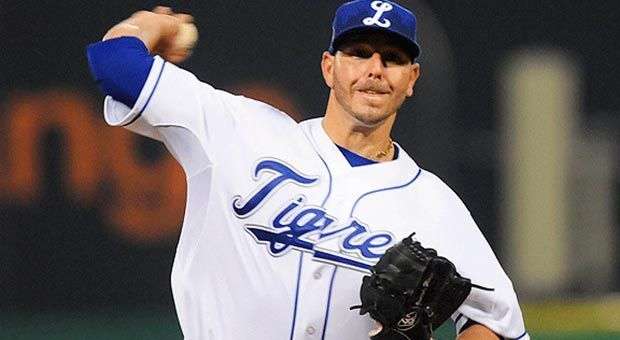 “The first thing I would do is greeting them … but not play against them.” the Cuban pitcher Yunesky Maya said in an interview that took place a few days ago in a Dominican TV channel.

With these words the Pinar del Rio hurler expressed his opinion about the real possibility that exists of facing the Villa Clara team that will represent Cuba in the upcoming Caribbean Series. This situation would occur if Yunesky finishes as champion in the Dominican Winter League with his team, or was chosen as reinforcement for another club that wins the title and earns the right to intervene in the regional tournament.

This statement by Maya, key figure in the pitching staff of the Tigres del Licey, sparked controversy among fans of Cuban and Caribbean baseball in general. Opinions occur at great speed. Some applaud the decision; others consider it a tacit ignorance of what it means to be a rented athlete.

Apparently the spiritual dimension of what “being Cuban” means to Yunesky completely excludes a possible duel in diamonds against a team from the island. It doesn’t matter for him if the uniform says Villa Clara or Guáimaro, or if the game is part of a club event and not national teams. In the symbolic order is that Cuba is present and he is not willing to compete with the land of his birth and he feels his. It is his right, an individual decision that should be respected.

Pragmatically Maya is a professional athlete and is subject to a contract with an entity that paid a salary for his performance. It’s his job and he is due, from the moment he signed the agreement that made him part of the roster of Licey. When José Ariel Contreras initialed his contract with the New York Yankees, more than a decade ago, this included a clause that validated his decision not to pitch to Cuban teams. If in the case of Maya this constraint does not exist, there would be no problem to discuss. Otherwise the Licey management may take legal action over his refusal either to terminate his contract, impose him a fine or any other variant.

It is impossible to ignore that Maya must also have a sense of belonging and commitment to his club and his teammates. In an article in ESPN, Jorge Morejon put the following example: “Suppose the Licey becomes champion and the inCaribbean Series faces in the decisive match Villa Clara from Cuba … Is manager Jose Offerman forced to forgo him and give the ball to a less qualified pitcher that could cost him the victory, just because the Cuban will not work against their compatriots?.

An interesting detail is that the franchises that represent the winter circuits in the 2014 Caribbean Series, which will happen from February 1 through ht 8 in Margarita Island, could have other Cuban players. If so, do they adopt a similar posture of Maya? I believe there is an individual decision that should be respected, even though I would never question their condition as Cubans for seeing them compete with our current monarch in the national club tournament. At the end, we are all Cubans. What do you think?