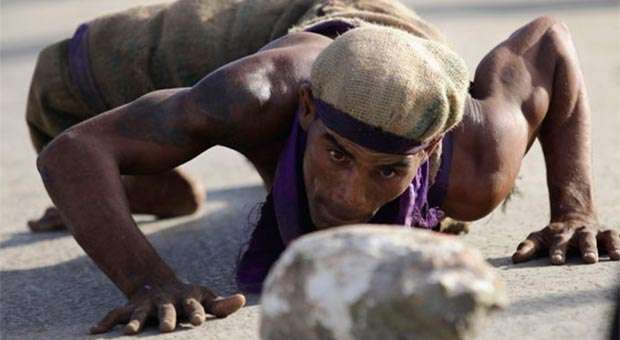 It’s December 17th, the day of San Lazaro, deity of the Christians who believe in resuscitations, or Babalu Aye (The King of Miracles), protector of the sick, for the followers of Afro-Cuban religions.

Every year, thousands of Cubans and some foreigners walk into El Rincon, in Boyeros municipality, 30 kilometers southwest of Havana, to honor him, ask favors or thank for the health of someone you love to the holy white hair man, who wears rags, crutches, sores and is always surrounded by dogs.

They say back in El Rincon where there was a hospital for leprosy patients, suffering associated with him according to several versions: one is based on the meaning of the name Lazarus in Hebrew means “God is my help” another referred to a history founded in Jerusalem in the sixteenth century sanatorium named like that and the third is linked to Lazarus resurrected by Jesus Christ and a fourth brings us to Babalu Aye.

Babalu Aye is the most esoteric and exciting of all Lazarus … The Yoruba legend perpetuates him as a arara king that because of his intense carnal desires and for ignoring the warnings and advice of the wise Orula picked all communicable diseases and was expelled from the kingdom of orishas.

Dressed in a jute sack and cleaning his wounds with herbs, the exiled visited Oggún, the god of the forge, who gave him two dogs to accompany him. Over time he healed and regained his kingdom.

One of the best descriptions of this deity that I have read was written by Manuel Cofino and appears reviewed in the book Rincón y la peregrinación de San Lázaro, published in 2011:

‘White man with twisted feet, stiff hands and bent back (…) He goes through the skin of the world dragging crutches. Filled with epellent pustules, crusts embedded. Dogs lick his wounds anxious to clean the bad blood. His face is mushy, glowing, full of pustules and straight hairs. His hard eyes, dull, dry but sometimes moisture in them that which is born of the tear, without relieving peek and fall. Hands and feet are heavy as stones. His skin glows rotten. “

On February 26, 1917 is when the little clinic in El Rincon starts to accommodate large amounts of leprosy patients in its still unfinished wards, in the muddy field, no water, no electricity, no roads, and no nurses … That was chaos and remained so until the early 30s, when they invested in new rooms.

As part of the Hospital, a simple church was erected where the first devotees of Saint Lazarus arrived on December 17, 1917.

There are several possible answers: December 17 in the Catholic calendar is dedicated to St. Lazarus bishop (a beheaded) and also in Cuba practitioners of African religions adopted for its festivals, almost entirely, the Catholic calendar. To this we must add that, in Africa, 17 means “old.”

If we become statisticians, numbers also provide fun facts about the pilgrimage El Rincon. I show.

According to research by the Center for Psychological and Sociological Research (CIPS) belonging to the Socio-religious Studies Department of the Academy of Sciences of Cuba, these are the years in which most participants have been involved in the 36-consecutive hours-pilgrimage….

The 90 ‘, with the crisis the special period represented, was decade has of a bigger amount of people going there. The growth rate was 8,191 persons per year, which represents an average increase of 16, 5 percent.

Most of the devotees were housewives, though among men predominated the workers, service workers, students, pensioners and technicians.

Their main reasons, according to CIPS studies were own, family member‘s or friend’s illnesses, devotion to the saint, seeking protection and other personal conflicts.