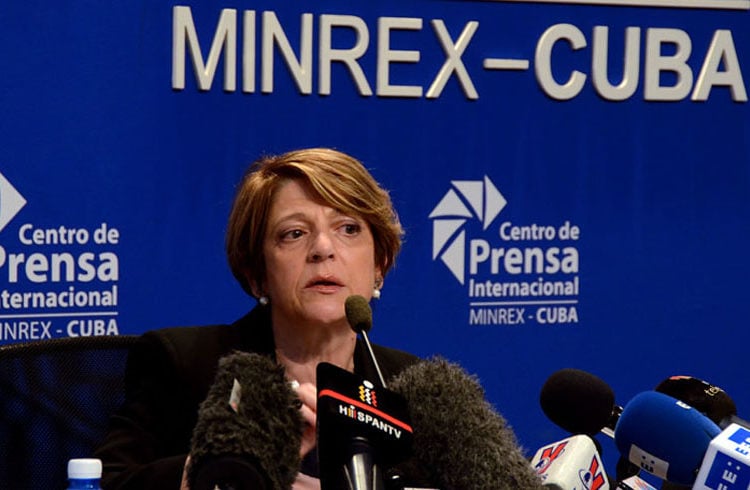 UN Special Rapporteur for Human Trafficking Maria GraziaGiammarinaro recognizes the Cuban government’s will to face this scourge, but warns that the island does no escape this phenomenon.

After a four-day visit to Cuba, in which she met with civil society authorities and representatives, Giammarinaro said last Friday during a press conference that she had detected strengths as well as vulnerabilities which she recommends should be seen to.

Among the first she praised the attention given to childhood and adolescence, the universal coverage of health and education, women’s levels of social participation and the existing social services. She also considered satisfactory the treatment given to the victims of human trafficking and the possibility of their social reinsertion.

In addition, she highlighted the work of institutions like the National Center for Sex Education (CENESEX) in the attention to the LGTBI community and other vulnerable communities, and referred to the existence of the already institutionalized good practices in Cuba.

“It is necessary,” she said, “to be constantly on the watch out for any risk situation or factor that traffickers can take advantage of.”

The UN rapporteur insisted on considering the phenomenon in all its dimensions and not just in terms of sexual commerce and abuse, be it of minor or adults. In this sense she recommended attuning the legislation in force in Cuba to the concepts managed internationally, that for example clearly differentiate procurement from the trafficking in persons.

She also asked for the expansion until the age 18 for minors victim of this crime, instead of the 16 currently established, and pointed out less visible forms of labor exploitation associated to the trafficking, like the one young people can suffer when trying to find jobs outside of Cuba. She also referred to cases of African emigrants who use the island as a springboard to reach the United States, although it has not been demonstrated that this is a tendency.

Illegal emigration was at Giammarinaro’scenter of attention. The rapporteur said she did not have precise numbers about the migratory wave of Cubans in recent years but showed concern about the fact that many have been and are still the victims of international networks of traffickers in persons.

Regarding the end of the “wet foot/dry foot” policy by the Obama administration, she considered that this closed a means used by traffickers to profit and put at risk the life of the Cuban migrants, but it created a new scenario for irregular emigration, which makes it necessary for a systematic vigilance, she said.

She referred to the importance of the fact that the Cuban government has signed international instruments and cooperation agreements with other area countries as a legal means to confront the cross-border trafficking. But she insisted on the internal prevention of this crime and in the training of persons in charge of its identification and attention.

“Protocols must be established to identify the different situations involving the trafficking in persons, and apply packages of measure according to each case,” she said.

On the national action plan that was presented to her before her visit to Cuba, the UN special rapporteur pointed out that it follows the international norms and that it presents a coordinated and multidisciplinary strategy. However, in her opinion it actually represents a point of departure, which is why she would be “very attentive” to its practical application.

Maria GraziaGiammarinaro affirmed that based on her visit she will draw up a report with recommendations which she will share with the Cuban government. She also affirmed that she hopes that with her visit a more advantageous dialogue will be fostered with the UN system of human rights and that it will serve as a prelude to other rapporteurs’ visit to the island.