Carnations never let their petals drop, they hug them to their hearts as they die. The same as mothers do with their children. 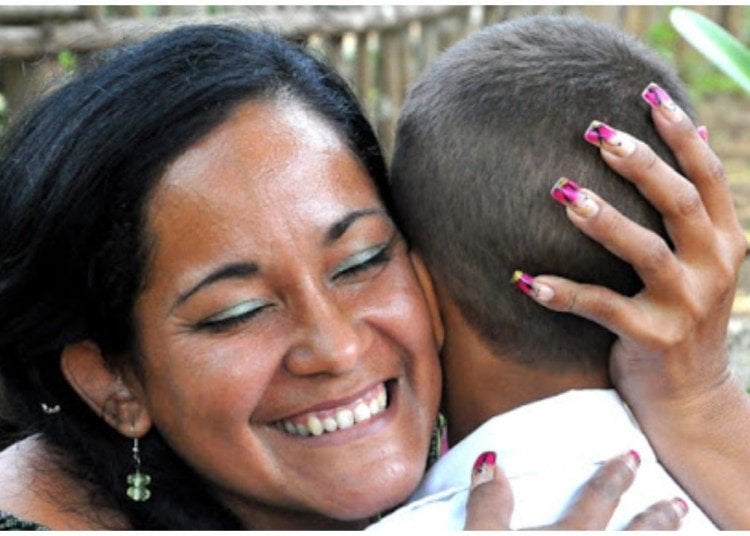 In 1872 Julia Ward Howe (1819-1910) decided to celebrate Peace Day in Boston, in what is considered the first antecedent of Mother’s Day. A poet and social activist, she wrote the “Appeal to Womanhood,” a true call for peace and disarmament. And a reaction to the carnage of the American Civil War (1861-1865) and the Franco-Prussian War (1870-1871).

After the War, Ward Howe became involved in the women’s suffrage movement. In 1868 she helped form the New England Women’s Suffrage Association, of which she was elected its first president, a position she held until 1877. Earlier, in 1871, she had become the first president of the American branch of the Women’s International Peace Association.

In the “Appeal,” Julia Ward Howe writes the following:

But women need no longer be made a party to proceedings which fill the globe with grief and horror. Despite the assumptions of physical force, the mother has a sacred and commanding word to say to the sons who owe their life to her suffering. That word should now be heard, and answered to as never before.

Arise, then, Christian women of this day. Arise, all women who have hearts.… Our sons shall not be taken from us to unlearn all that we have been able to teach them of charity, mercy, and patience. We, women of one country, will be too tender of those of another country, to allow our sons to be trained to injure theirs…. The sword of murder is not the balance of justice. Blood does not wipe out dishonor, nor violence vindicate possession. As men have often forsaken the plough and the anvil at the summons of war, let women now leave all that may be left of home for a great and earnest day of council.

However, she was not successful in the attempt. But years later, in 1907, another American―Ann Jarvis (1864-1948), from West Virginia―commemorated one more anniversary of the death of her mother, a prominent community activist in the United States at the time. This is the origin of the red carnations for living mothers, and white carnations for dead mothers, because they were the favorite flowers of the deceased and because they symbolize the truth and purity of maternal love. Carnations never let their petals drop, they hug them to their hearts as they die. The same as mothers do with their children.

Jarvis also campaigned to celebrate it on the second Sunday in May. In 1908 an Episcopal church in Grafton, of which she was a prominent member, gathered that day to honor mothers. The following year, in 1909, the practice was adopted throughout West Virginia thanks to an executive order from its governor.

In 1914, after a national lobbying and in the midst of World War I, the federal calendar was opened to mark the date as Mother’s Day. On May 8, the United States Congress passed a law designating the second Sunday in May as Mother’s Day. The following day, President Woodrow Wilson (1856-1924) ratified it by proclamation.

Six years later, in 1920, in the town of Santiago de las Vegas, a few minutes from the city of Havana, musician, journalist and writer Francisco Montoto launched the initiative to celebrate Mother’s Day in a theater where there were also carnations of both colors.

Francisco Fina García, historian of Santiago de las Vegas, wrote in the magazine Antorcha on May 30, 1964:

In the daily petit gathering, Mr. Francisco Montoto presented his idea of ​​celebrating Mother’s Day, and working for Cuba to dedicate one day of the year as a tribute to mothers, following the brilliant idea started by Miss Ann Jarvis in the city of Philadelphia. ​​Mr. Montoto’s idea was unanimously received by those gathered and they agreed to organize an event in tribute to mothers, which took place on May 10, 1920 at the Centro de Instrucción y Recreo, this being the first celebration in Cuba in honor of mothers.

The following year, the Havana city council endorsed the idea, in which the work of journalist Víctor Muñoz Riera intervened from the pages of the newspaper El Mundo. As of 1928, this originally U.S. action determined that Cuban mothers were given cakes, like what was done with the Sanateria deity Obatalá, not custard with cinnamon, nor fritters in syrup. The island-anthropophagous had closed its selective assimilation mechanisms, in force today with an impressive persistence.

In today’s Cuba, mothers have been the ones that have undisputedly weathered a crisis that doesn’t improve. In the kitchen and at the table they have performed the miracle of the loaves and the fish, very often without failing to fulfill their social and labor obligations, something that continues denoting the double workday and expresses the action of a still present patriarchal culture, although many believe that the problem involves helping and not sharing.

On the other hand, they have also been the quintessential negotiators of family conflicts between fathers and sons, exposed with certain sociological aim by director Humberto Padrón in his anthological film Video de familia (2001). Here, deep down, there is a tradition that dates back to the Colony, when Cuban mothers had to mediate in the heartbreaking schism between the Spanish husband and the Cuban-born son once he had aligned himself with the star that illuminates and kills. And they knew how to do it in an exemplary way.

Because of all this, and more, may all Cuban mothers, wherever they are, receive my most heartfelt tribute on this day. They deserve it.