“Nothing compels me to make this decision, but I fervently believe in the strength and value of the example and understanding of my compatriots,” said the former president. 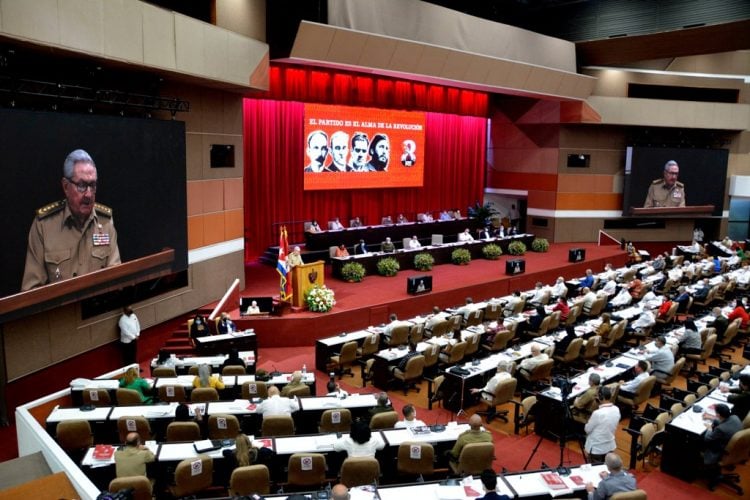 The former Cuban president and leader of the island’s Communist Party, Raúl Castro, presents the Central Report of the 8th Congress of the political organization, at the Havana Convention Center, on Friday, April 16, 2021. Photo: @PartidoPCC/Twitter

The former Cuban president and until now leader of the island’s Communist Party (PCC), Raúl Castro, confirmed this Friday that he will cease to be the First Secretary of the political organization, a position he has held for ten years.

In his presentation of the Central Report of the 8th Congress of the PCC, which began this morning in Havana, Castro said that his work at the head of the party “concludes with the satisfaction of having fulfilled the trust in the future of the homeland, with the thought-out conviction of not accepting a proposal to keep me in higher positions in the party organization.”

“Nothing compels me to make this decision, but I fervently believe in the strength and value of the example and understanding of my compatriots,” he said, quoted by the official Cubadebate website.

The 89-year-old former president, who three years ago left the country’s presidency in the hands of Miguel Díaz-Canel, assured that, nevertheless, he will continue to be a member of the PCC “as one more revolutionary fighter, ready to make my modest contribution to the end of life” and that as long as he lives he will be “ready to defend socialism.”

Castro also highlighted the work carried out by Díaz-Canel, who is expected to also take over the leadership of the PCC. He said of him that “he is not the result of improvisation” and that he has been carrying out his position “with good results,” adding that as president “he has been able to form a team.”

“I have the satisfaction that we are handing over the leadership of the country to a group of prepared leaders, hardened by decades of work from the base and committed to the ethics of the Revolution and socialism; with great sensitivity towards the people, full of passion and anti-imperialist spirit and looking out for the continuity of the work of the Revolution,” he pointed out in another part of his speech before the delegates gathered at the Convention Center, despite the re-outbreak of COVID-19 in the Cuban capital.

Relations with the U.S. and the economy

During his speech, the also Army General denounced the U.S. government’s “increased hostility” in recent years and insisted on Cuba’s willingness to promote a respectful dialogue “without concessions inherent to its sovereignty and independence.”

Castro, who during his presidency promoted the thaw with the United States, deplored the tightening of Washington’s sanctions, even during the coronavirus pandemic, and said that the more than 200 measures against Cuba imposed during Donald Trump’s term in office are an expression of the “ruthless nature of imperialism.”

He described the U.S. policy towards Cuba as a “real hunt” and criticized that Washington seeks to “sabotage the business system, make the State’s management fail and promote chaos, strangling the country and provoking social unrest.”

The former Cuban president assured that the development of the national economy is today, together with “the struggle for peace and ideological firmness,” one of the “main missions” of the PCC. In addition, he called for defending the increase in national production, especially food, and to banish the “harmful habit of importing,” according to state press reports cited by the Spanish EFE news agency.

The leader added that “the country must get used to living with what we have and not expect more than what we are capable of generating, as long as the unsatisfied demands of the population constitute an incentive for national producers.”

The 8th Congress of the PCC continued this afternoon in three working commissions. The first, headed by Prime Minister Manuel Marrero, addressed the country’s socio-economic issues; the second, chaired by the veteran José Ramón Machado Ventura, would focus on the functioning of the political organization and ideological activity; and the third, led by Díaz-Canel, would assess the policy of state and government cadres, “as well as the role of the Party to achieve higher results,” Cubadebate reported.

In the conclave of Cuban communists, whose motto is “unity and continuity,” not only is the already confirmed departure of Raúl Castro from his party leadership post expected, but also a broader generational change, with the withdrawal of the so-called “historical generation” that would give way to leaders born after the 1959 Revolution.